Out trustees Williams, Temprano sworn into second terms on SF college board 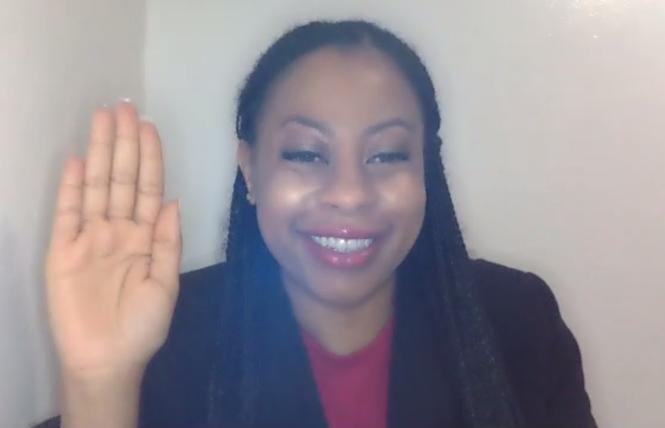 City College Trustee Shanell Williams raises her hand to take the oath of office for a second term; she was also reelected board president by her colleagues. Photo: Screengrab via Zoom

Four people were sworn in to the San Francisco City College Board of Trustees January 14 before the governing body reelected out members Shanell Williams and Tom Temprano as president and vice president, respectively, during its first meeting of the year.

The meeting took place on Zoom due to the ongoing COVID-19 pandemic.

"It's an excellent day swearing in new leadership for our city," Haney said, calling City College "the most essential educational institution for young people in our city."

"I'm sure that's something you say a lot, but now it's true," Haney added. "We will not be able to recover without your work."

Haney said he knew Williams from her time as a student leader and activist.

"She was there with a bullhorn," Haney said. "It's a testimony to our city that such an extraordinary leader who was built up by City College is now leading the institution."

After being sworn in, Williams thanked Haney and said that 2020 had been an astonishing year for the school.

In a statement to the Bay Area Reporter, Williams wrote that she wanted to thank San Franciscans for their trust.

"Thank you to San Francisco voters for reelecting me to college board during this unprecedented time," Williams stated. "I am committing to serving our students while we face the dual pandemics of COVID-19 and systemic racism that are deeply impacting our country."

Williams was the top vote-getter in the November 3 election for four seats on the board, garnering 17.98% of the citywide vote, according to final Department of Elections results. Temprano followed in second place with 17.17%. 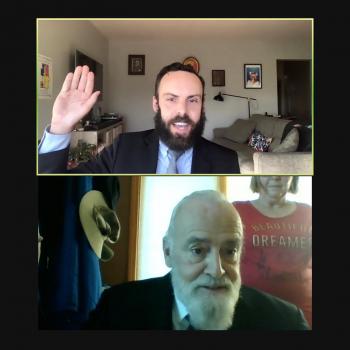 Temprano, a gay man who also serves as a legislative aide to gay District 8 Supervisor Rafael Mandelman, also won another four-year term on the board. He was sworn in by his father, Tom Temprano Sr.

"I know you couldn't be here last time I was sworn in so this means the world to me," the younger Temprano said. "My dad — my grandma is in there with him — is the greatest community college success story I know."

Temprano Sr.'s parents immigrated to the United States from Spain. Born in Brooklyn, he went on to become a teacher and a guidance counselor, his son said.

"When I look at the opportunities I and others had, I look at people like my dad," Temprano said. "Thank you dad and thank you for the beard as well."

In a statement to the B.A.R., Temprano was optimistic about the prospects for the coming year.

"I'm truly grateful to the voters of San Francisco for giving me another opportunity to serve City College," he wrote. "I believe that with a Biden administration fighting for, and not against public education and with strong support at the state and local level for our college, we can weather our current challenges and come out stronger than ever.

"My top priority is to ensure that we continue to reopen safely and provide educational opportunities that will be critical to San Francisco's economic recovery."

Outgoing trustee Ivy Lee swore in incoming trustee Alan Wong, in the only swearing-in to occur in person.

Wong said that through City College his immigrant father got the training he needed to become a hotel cook.

Clayton Koo of the Jefferson Elementary School District board in northwest San Mateo County swore in Aliya Chisti to her new position. Chisti recalled that she grew up in the neighborhood around City College's main campus off Ocean Avenue on the west side.

"I have seen City College from my window since I was a little girl," Chisti said. "This is an incredible honor and I vow to do my best."

Second term for Williams' presidency
Normally, the leadership positions on the board rotate each year. However, since Williams and Temprano's terms overlapped with the annus horribilis 2020, it was felt they should each be given a second term.

"I think they deserve a do-over," trustee Brigitte Davila said while nominating the pair for the positions.

Williams and Temprano were reelected to their 2020 posts but trustee Thea Selby made it clear that she would have preferred someone else fill the vice presidential position.

"I adore Tom Temprano. I'm one of his big fans," Selby said. "The issue is more one of leadership development."

Since Temprano has been vice president since 2019, Selby argued, his occupancy of the vice presidential role might be preventing others from getting "a taste of what it means to be president."

"If I felt someone wanted to step up, I'd be more strong about this," Selby said, before going on to vote for Williams and Temprano.

"While I understand those concerns, I am thankful for the nomination and I accept it," Temprano said in response.

The City College board is now on a (virtual) retreat to start the year. It will meet again January 28.