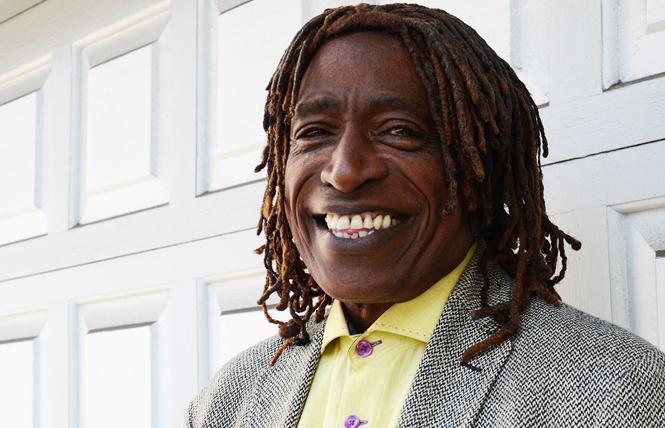 Longtime gay activist Ken Jones, a Black man who was key to the desegregation of LGBTQ activism, died January 13. He was 70.

The cause was cancer, according to Cleve Jones, a close friend.

"Ken Jones was a hero," Cleve Jones wrote in a Facebook post announcing his friend's death. "He survived many struggles. He deeply loved his family and his community, and dedicated his entire life to the movement for peace and justice. He was very grateful to all of you who reached out to him with messages of encouragement and love during his illness. Today Ken lost his fight against cancer. A memorial will be arranged when it is safe once more for us to gather. Rest in Power, Ken. I love you."

Mr. Jones died at the San Francisco VA Medical Center, which he had been in and out of since a bladder cancer diagnosis on September 15, according to Sanjai Moses, who was a caregiver for Mr. Jones at the time of his death and who she said helped raise her.

"It's going to take a lot of time for our community to adjust to Ken not being here anymore," Moses said.

Cleve Jones had been posting updates about Ken Jones' cancer diagnosis over Facebook, writing on December 18 that the two had spoken on the phone.

"Ken wants his friends to know that he is back in the hospital and the cancer he has fought all year has spread," Cleve Jones wrote. "Due to COVID-19, he can't have visitors, which adds of course to the sadness of the situation. He and his medical team at the VA are evaluating his options."

On December 22, in one of his last Facebook posts, Ken Jones wrote that he was "back at home." (He subsequently went back to the VA).

"I am back at home. Pain regimen is working; BM regimen is moving; and appetite stimulant is doing its thing," Ken Jones wrote. "Today I decided that it is not how many suns and moons you witness as much as what you are able to undertake (with your whole heart) and fight for! Soooo, if I can stay in the (existential) here and now (where all is well) and not get caught up in my circumstances which are only temporary ... I've got many things to do as the clock ticks (loudly). Thank you for your warm words of encouragement, care and concern. Peace and Love."

Ken Jones had been portrayed by actor Michael K. Williams in "When We Rise," a 2017 ABC-TV docudrama chronicling the early LGBTQ civil rights movement in San Francisco. He reflected on his history of activism in a contemporaneous interview with the Bay Area Reporter, discussing how he pushed for many of the early LGBTQ organizations to diversify.

"We decided that it had to begin and that two seats would be given up from the high-performing, and highly skilled, volunteers to women and people of color," Mr. Jones told the B.A.R. "Some of the white men were infuriated by having to give up their treasured seats to absolute nobodys. Many of them spent hundreds of hours to make sure we failed at every opportunity."

Pioneer of activism
Mr. Jones was born on November 9, 1950 and grew up in New Jersey. He served three tours of duty in the Vietnam War, Moses said, and was assigned to Treasure Island in 1972 in the San Francisco Bay for what he called "relaxed shore duty" in a brief biography Moses and Mr. Jones wrote together in 2019.

"In the 1970s before The Internet, ironing board tables at Hibernia Beach [at 18th and Castro streets] were our community organizing headquarters," Mr. Jones wrote, recalling the early movement for LGBTQ rights.

Mr. Jones was a core volunteer at the Kaposi's Sarcoma Research and Education Foundation, which became the San Francisco AIDS Foundation. He also "created and managed the very first 100-mile AIDS Bike-a-Thon from San Francisco to the Russian River."

Mr. Jones also served as the first African American chair of the San Francisco LGBT Pride Celebration Committee board. He served at the SF Pride organization during the early 1980s, Moses said.

Joining the parade organization in 1980, Mr. Jones started as a co-chair of the outreach committee to bring visibility toward disenfranchised groups.

Mr. Jones also served on the citizen review board for the BART Police Department beginning in 2009, after the BART police killing of Oscar Grant.

After being diagnosed by HIV, Mr. Jones wrote that he "moved across the street from Ocean Beach where [I] spent a DECADE preparing to die with dignity," only realizing "slowly, very slowly" that he "might not be dying after all."

According to Moses, Mr. Jones is survived by a sister, LaSandra Henderson, who lives in New Jersey.

Fundraiser aims for bench to honor Ken Jones
Sign up!