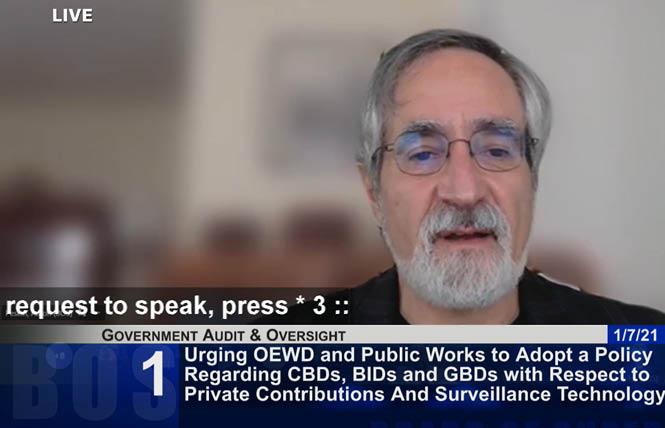 A San Francisco Board of Supervisors committee January 7 forwarded on to the full board a resolution requiring community benefit districts, among other groups, to disclose their use of surveillance technology at a public hearing in advance of using them.

Further, the resolution urges the Office of Workforce and Economic Development and Public Works to adopt policies that CBDs, Business Improvement Districts, and Green Benefit Districts annually disclose all private contributions over $100; and that they cannot accept anonymous contributions.

The resolution was heard by the three-person government audit and oversight committee, which voted unanimously to support it.

Introduced by District 3 Supervisor Aaron Peskin, and co-sponsored by the other committee members — chair Gordon Mar (District 4) and District 6 Supervisor Matt Haney — the resolution, which needs to be approved by the full board, is intended to limit the ability of CBDs, Business Improvement Districts, and Green Benefit Districts to use controversial surveillance tactics that are now being considered in the Castro neighborhood.

Tech mogul Chris Larsen has funded CBDs to install cameras around San Francisco, as the New York Times reported in July 2020. Larsen, who has not responded to Bay Area Reporter requests for comment, has paid for over 1,000 cameras to surveil people in the Fisherman's Wharf, Lower Polk, Mid-Market, Tenderloin, Union Square, and Japantown neighborhoods.

Last fall, after it was proposed that the Castro/Upper Market Community Benefit District install cameras, the Harvey Milk LGBTQ Democratic Club was successfully able to apply pressure to the Castro CBD to postpone a vote on accepting some $695,000 for a network of 125 security cameras.

The Castro LGBTQ Cultural District expressed its own "grave concern" about the plan, and the Castro CBD agreed to do a Zoom town hall and listening session about the proposal before going further. That has not yet occurred.

As the B.A.R. reported last month, a Castro CBD survey to solicit public feedback is now available online. No decision on the cameras has been made according to Andrea Aiello, a lesbian who is the executive director of the Castro CBD.

Aiello declined to comment about her thoughts on whether cameras should be allowed for CBDs and communities that want them.

But Peskin expressed concern during the hearing.

"Some of the CBDs, which are an extension of the city, have been blanketing communities from Japantown to Union Square with surveillance technology," Peskin said. "Other CBDs, namely the Castro, are contemplating accepting a half-million dollars from someone of high net worth and was quoted in the New York Times, which raised eyebrows about the role that CBDs play. I present this rule to you in that context."

The resolution, if adopted by the board, will "urge" CBD, BID and GBD management district rules to prohibit accepting anonymous gifts, will "make it the administrative policy of the City and County of San Francisco to request reporting of the acceptance of non-assessment private contributions or gifts on an annual basis," and will prohibit acquiring surveillance technology by CBDs, BIDs and GBDs without a public hearing and approval by the city government.

After Peskin introduced the proposed resolution, Mar and Haney briefly spoke in support and said they would agree to co-sponsor, and it subsequently was forwarded to the full board with a positive recommendation.

Peskin's office sent a brief statement in response to an interview request.

"In talking to Supervisor Peskin, I don't think we had much to add beyond what is in the resolution itself," Lee Hepner, a legislative aide for Peskin, wrote in an email to the B.A.R. "This will be implemented administratively by the city (pursuant to its existing authority to do so via CBD Management Agreements) as soon as it is passed by the full board."

Haney's office declined to comment by press time, citing the then-upcoming vote for presidency of the Board of Supervisors.

Torrid town hall on cameras to yield only more discussion
Sign up!