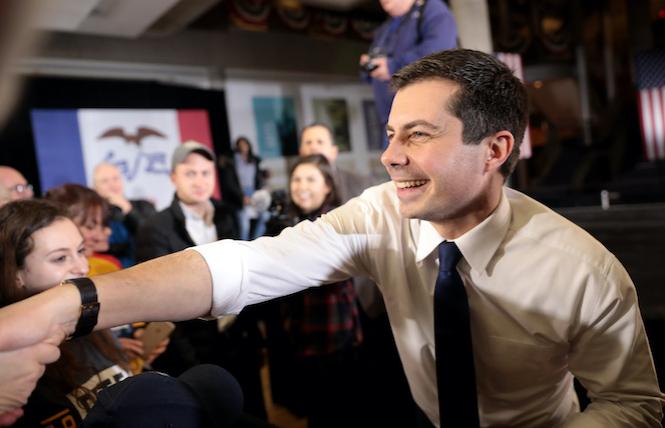 Pete Buttigieg, as photographed by Gage Skidmore, used under CC license/resized and cropped.

2020 brought hardships on many fronts — COVID sickness, death, and economic upheaval; continued police killings and other violence against people of color, especially Black people; and continued climate crisis evidenced by wildfires and other natural disasters, to name just a few.

Yet as the Bay Area Reporter's national politics and legal affairs correspondent Lisa Keen told Out in the Bay radio and podcast listeners this week, the past year also brought significant progress for LGBTQ people, despite setbacks in some areas. She also likened some of President Donald Trump's recent actions to "sedition."

Among Keen's highlights: Black Lives Matter's "historic and wonderful" growing power and the movement's insistence that Black queer and trans lives also must be honored and protected; Joe Biden's and Kamala Harris' election to the White House; the first-ever election of two Black gay men to Congress; Pete Buttigieg's rise to national prominence and nomination to Biden's cabinet; and the U.S. Supreme Court's ruling last June that Title VII's protections against sex-based discrimination also bar discrimination based on sexual orientation and gender identity.

Keen warned of threats to LGBTQ liberties at the U.S. Supreme Court though, after the Republican-controlled U.S. Senate swiftly confirmed Trump nominee and religious conservative Amy Coney Barrett to replace the late Associate Justice Ruth Bader Ginsburg. With Barrett on the bench, Keen said, "I think a lot of religious right challenges are going to continue coming before the Supreme Court."

In our half-hour talk recorded January 3, Keen likened Trump's and some supporters' words and actions to "sedition." Our conversation was recorded three days before Biden used the same word to describe Wednesday's Trump-inspired forced entry by a mob into the U.S. Capitol.

Discussing Wednesday's scheduled congressional certification of the Electoral College votes and Trump allies' plans to contest it, Keen had warned that the events "could be serious."

"It's almost sedition what President Trump and some of the senators who will go along with him are voicing," said Keen. She also said she was "deeply disturbed" by Trump's recent weekend phone call to Georgia Secretary of State Brad Raffensperger, asking him to find enough more votes for Trump to change the results of Georgia's presidential election, which Biden won.

Hear more from reporter Keen on this week's Out in the Bay — Queer Radio from San Francisco. The program re-airs at 9:30 a.m. Saturday, January 9, on KSFP 102.5 FM in San Francisco only, and is available anytime on Out in the Bay's website. Out in the Bay also airs at 10 p.m. Tuesdays on KALW, 91.7 FM throughout the Bay Area.

Lisa Keen has been covering politics and legal affairs for LGBTQ news outlets nationwide, including the B.A.R., for 40 years.

Mayor Pete: the coming out of American politics
Sign up!