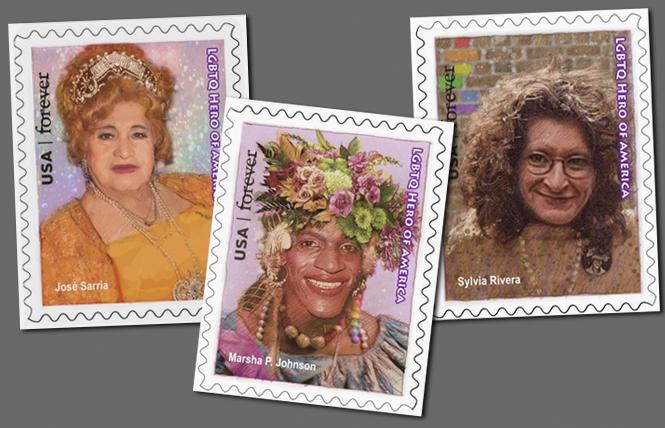 A postal service stamp advisory panel will consider issuing stamps honoring three deceased drag icons who have become heroic figures within the LGBTQ community. The trio would be the first drag performers to be honored in such a manner if the stamps are approved.

Those being considered by the U.S. Postal Service's Citizens' Stamp Advisory Committee are José Julio Sarria, Marsha P. Johnson, and Sylvia Rivera, according to a December 9 letter the federal agency sent to the San Francisco Board of Supervisors. On the last day of LGBTQ History Month in October, the 11-member board became the first elected body to officially endorse the postage effort.

In the letter thanking the supervisors for their resolution, the federal agency disclosed that the advisory committee would take under consideration issuing the stamps for the drag performers possibly in 2023 or a year later. The advisory panel recommends ideas for commemorative stamps, but it is up to the U.S. postmaster general to make a final determination.

"Currently, stamps for 2023 and subsequent years are being considered. I understand that the Committee wiil (sic) be considering proposals to issue stamps honoring Jose Julio Sarria, Marsha P. Johnson, and Sylvia Rivera," wrote Nadine Munson, the postal service's government relations correspondence manager. "If they do not receive approval for issuance in the future, the announcement will be made publicly, in keeping with our standard practice. The Board of Supervisors' support for this subject is being included in the Committee's files."

San Diego resident Nicole Murray Ramirez launched the campaign in the summer after the Bay Area Reporter contacted him for comment about several stamps issued to commemorate the 80th birthday of Bugs Bunny depicting the animated rabbit in drag. It is believed to be the first time drag has been featured on U.S. stamps.

He had the San Diego Human Relations Commission, on which he serves, also send a letter in support of the drag stamp campaign to the advisory committee. Murray Ramirez told the B.A.R. Monday that a formal campaign to get other elected officials, LGBTQ luminaries, and community members to write letters in support of the stamps for the drag icons would launch later this month once President Donald Trump leaves office.

"We are encouraged with the postal department's response and will be launching a full-fledged national campaign in support of the stamps after January 20 when President-elect Joe Biden is sworn in," said Murray Ramirez when informed about the letter sent to the San Francisco County board.

Gay District 8 Supervisor Rafael Mandelman authored the resolution in support of seeing the stamps be approved. Mandelman represents San Francisco's LGBTQ Castro district, which includes the one-block portion of 16th Street in front of the neighborhood's library that was renamed José Sarria Court.

"I am glad we were able to get the attention of the United States Postal Service," Mandelman told the B.A.R. "Representation and visibility of LGBTQ people, and especially queer people of color, is more important than ever and here the USPS has an opportunity to share the names and stories of these three extraordinary queer Americans with millions of people."

Sarria, who died in 2013 at the age of 90, was a legendary San Francisco-based drag queen who founded the Imperial Court in 1965 and grew it into an international philanthropic drag organization. The Latino Army veteran had made history four years prior as the first out gay person to seek elective office in the U.S. with his ultimately unsuccessful bid to become a San Francisco supervisor.

Johnson, who was Black, and Rivera, the child of a Puerto Rican father and Venezuelan mother, co-founded Street Transvestite Action Revolutionaries to provide support to poor young people in New York City who were shunned by their families, as the New York Times noted in a 2019 story about city officials planning to install a monument featuring the close friends not far from the Stonewall Inn.

Among the LGBTQ leaders and advocates signed on to the campaign in support of the stamps as honorary co-chairs are drag queens Sister Roma, with the Sisters of Perpetual Indulgence San Francisco chapter, Chad Michaels, who won the first season of "RuPaul's Drag Race: All Stars," and CoCo LaChine, an empress with the Imperial Court of New York; Matthew Shepard Foundation founders Judy and Dennis Shepard; and Jack Thompson, the first trans person of color to be named International Mr. Leather.