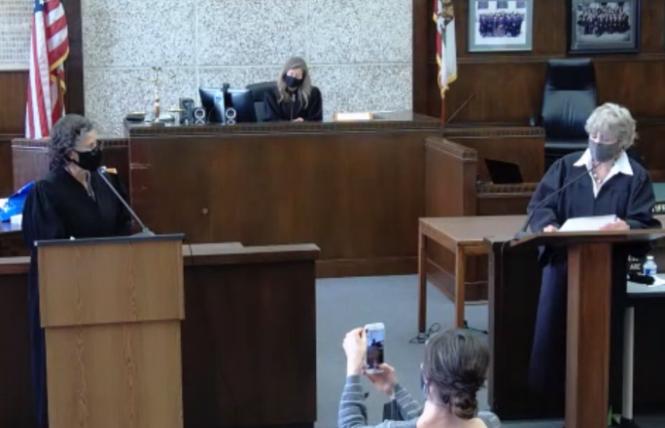 Lesbians took oaths of office January 4 for a seat on the Alameda County Superior Court and the Oakland City Council.

Elena Condes, the first Latina lesbian judge elected to the Alameda County bench, was sworn in by retired Superior Court Judge Cecilia Castellanos, the first Latina on the county bench, in a virtual ceremony from Presiding Judge Tara Desautels courtroom at the Rene C. Davidson Courthouse in Oakland. There were a few people in attendance, including Condes' spouse, Danielle.

"It is a momentous occasion," Desautels said before the ceremony began.

During her remarks, Condes thanked her family and supporters. A longtime criminal defense attorney, Condes recalled entering a courtroom in another county with her client, a young boy. She was told she couldn't bring her child to court.

"It was moments like these that I thought I could and should do something," she said.

"As the first Latinx to run, I showed that we do not need to wait for someone to choose us," Condes added, referring to the fact that most judges in the state are appointed by the governor.

Condes won her election in November by defeating Mark Fickes, a gay man and longtime attorney. According to certified results, Condes received 55.91% of the vote to Fickes' 43.64%.

Prior to her swearing in, Condes' spouse enrobed her with the plain black garment that is stipulated judges wear when on the bench.

Desautels said at the close of the ceremony that Condes would be assigned to family law at the Hayward Hall of Justice. 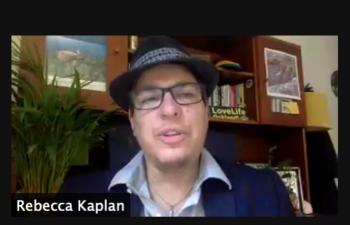 Rebecca Kaplan, a lesbian and, until Monday the council's president, took her oath of office after winning reelection to the at-large seat in November. She remains the council's only LGBTQ member.

Following the ceremony, Councilwoman Nikki Bas was elected by her colleagues to serve as president; Kaplan will serve as vice mayor.

During her remarks, Kaplan, who started her third term representing the entire city, spoke of several initiatives that were either completed or need to continue. She thanked voters for approving a ballot measure that will see the city's civilian police commission gain more authority and one that will allow 16-year-olds to vote in local school board elections.

Speaking about the health crisis, Kaplan reminded people to wear masks and distance from others. "This pandemic is not over," she said.

Oakland Mayor Libby Schaaf spoke at the start of the ceremony. She said that 2021 "will not be an easy year" as the effects of the global pandemic continue to be felt in the city and beyond.