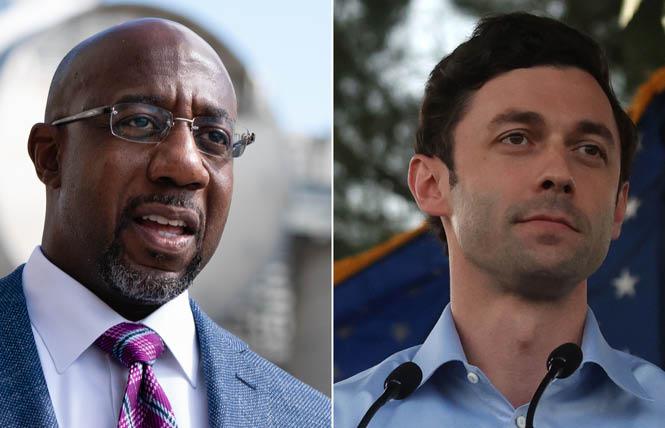 The country's attention will be riveted on Georgia this week where runoff races for the state's two U.S. Senate seats will determine whether Democrats will once again have complete control of the legislative and executive branches in D.C. come January 20 or if Republicans will maintain their grip on the Senate and can block the agenda of President-elect Joe Biden.

Should the two Democratic candidates, Jon Ossoff and the Reverend Raphael Warnock, defeat Republican Senators David Perdue and Kelly Loeffler in their respective races Tuesday, then the 100-member chamber will be split evenly between the Democrats and Republicans. With Vice President-elect Kamala Harris providing the tie vote, it would tilt control of the Senate back to the Democrats.

The stakes are so high for the incoming administration that Harris traveled to Savannah, Georgia Sunday to campaign on behalf of the Democratic ticket. And Biden is scheduled to be in Atlanta Monday. Last week, Ossoff aired a minute-long spot narrated by former President Barack Obama that featured John Legend singing "Georgia On My Mind."

President Donald Trump will also be heading to the Peach State Monday night to help get out the vote for the Republican senators. The trio will be in Dalton, Georgia for what the Republican National Committee is calling a "Victory Rally."

But Trump has been fighting with Georgia's Republican governor and top election official for weeks over the state's election results from his November 3 contest with Biden. Without any evidence, Trump has insisted that Biden's narrowly winning the state was in error and has lashed out at the state officials for not reversing the results.

Last week, Trump called on Governor Brian Kemp to resign in a December 30 tweet. Kemp had inflamed the president's ire when he certified Georgia's 16 electoral votes for Biden after multiple recounts affirmed Biden's victory in the state.

The sniping has led some to question if Trump will cause Republican voters to stay home on Tuesday. Democrats have already shattered records with their voting early in the contests, raising hopes that the traditionally red state will go blue.

Adding to the uncertainty around the special elections has been Trump's fight with Senate Republicans over his call to increase special payments being sent to struggling American households from $600 to $2,000. The House, led by Speaker Nancy Pelosi (D-San Francisco) quickly took up Trump's proposal and passed a bill to boost the payments with significant support from Republican House members.

Senate Majority Leader Mitch McConnell (R-Kentucky) has refused to bring the bill up for a vote. With their facing the possibility of being drummed out of office, both Loeffler and Perdue came out in support of the $2,000 check amounts.

The electoral drama has seen politicians on both sides of the aisle inundate the email inboxes of their supporters and reporters with fundraising pitches to help with the campaigns in Georgia, though a large share of the money raised is helping to line their own campaign coffers.

"To be honest, I've never seen the Senate as dysfunctional as it is now. Mitch McConnell has turned the Senate into a legislative graveyard — and spent the last four years confirming Trump's right-wing judicial nominees," wrote Senator Dianne Feinstein (D-California) in one such emailed pitch sent last week. "President-elect Joe Biden and Vice President-elect Kamala Harris need a Democratic Senate."

Queer groups organize
LGBTQ groups have also gotten involved in the races, organizing their staffs and supporters to make calls to voters in Georgia on behalf of Ossoff and Warnock. Not only would their winning open the door for LGBTQ legislation to pass out of Congress, it would also make it easier for Biden's nominees for cabinet positions and the federal courts to be confirmed by the Senate.

Neither Purdue nor Loeffler have said they would pass the Equality Act, an omnibus LGBTQ rights bill that their Democratic opponents have pledged to vote for if elected. Loeffler authored a bill that would prevent transgender athletes from competing on sports teams consistent with their gender identity and has been forcefully opposed by the members of the women's basketball team she co-owns, the Atlanta Dream.

In the week leading up to Tuesday's election GLAAD, Georgia Equality, and VoteAmerica teamed up to send out phone messages and texts from actors Tommy Dorfman and Kat Graham in order to turn out LGBTQ and ally voters in the state. Dorfman, who is queer, is an Atlanta native who starred in Netflix's "13 Reasons Why."

Graham, a straight ally, is a resident of Georgia who stars in the current Netflix holiday film "Operation Christmas Drop." Video of Dorfman's phone message can be viewed here:

while Graham's message can be heard here:

"According to exit polls, LGBTQ voters made up 7% of Georgia's electorate in the general election," stated Georgia Equality Executive Director Jeff Graham. "Making sure these voters, along with our allies, vote in this runoff will send a strong message that pro-equality voters are a crucial voting bloc that can no longer be ignored."

Local political groups in San Francisco have also been working to help Ossoff and Warnock. Gay attorney Charlie Spiegel has helped raise money and organize volunteers on behalf of the Democrats via the Action-SF group he belongs to, as well as has teamed up with other members to take out ads in the Bay Area Reporter about the Georgia races.

"Biden is the president elect, and Trump is the president reject. Big win for four years of work for so many of us," Spiegel told the B.A.R. in an emailed reply. "Georgia's Jan. 5 U.S. Senate runoff election determines how much Biden can accomplish beyond the things Presidents can do unilaterally, things which require the Senate to go along like lifetime federal judges, the federal budget, changes to laws — all of which will affect our LGBTQ community and others profoundly for decades."

To learn more about what Action-SF is doing in the Georgia races, as well as its work informing voters in the state how they have until January 8 to fix the issues that led their mailed in ballots to be rejected, visit its website.

Those interested in volunteering Monday or Tuesday can also go to Democracy Action and Grassroots Dems.

"Those two wins will make our Kamala Harris be the tie-breaker in the Senate and the most consequential vice president in American history. All that would be very cool!" noted Spiegel.