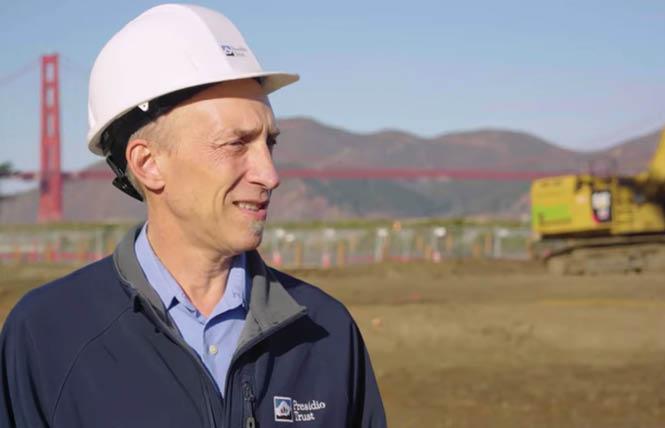 New wetlands are percolating on San Francisco's northwestern shore, with a hiking trail running through it that provides stunning views of the Golden Gate Bridge and urban bird-watching spots.

Called Quartermaster Reach Marsh, the nearly seven-acre site is situated next to Crissy Field Marsh within the Presidio, the former U.S. military installation turned national park site. It opened to the public earlier this month after years in the planning and construction stages.

Helping spearhead its creation has been Michael Boland, a gay man who is the chief park development and visitor engagement officer for the Presidio Trust. The federal agency oversees the management of the decommissioned Army base and is working to restore its natural landscapes.

Boland had met up with the Bay Area Reporter last year not far from the new marshland for an interview ahead of his receiving the prestigious designation of Fellow of the American Society of Landscape Architects. Throughout his career as a landscape architect Boland, 58, has played a key role in designing several of the city's celebrated natural sites.

His work has included the National AIDS Memorial Grove carved out of a dell inside San Francisco's Golden Gate Park; the overall development plan for the defunct prison grounds on Alcatraz Island; and the restoration of the decommissioned airfield at Crissy Field, now a bayside aquatic haven within the Golden Gate National Recreation Area.

Quartermaster Reach Marsh is part of a larger project transforming 14 acres inside the Presidio into new parkland atop highway tunnels that replaced the former Doyle Drive. The elevated freeway that led motorists off the Golden Gate Bridge into the city's Marina district was demolished and replaced with the ground level Presidio Parkway.

Crews covered the enclosed sections of the roadway with dirt in preparation for the creation of new public green spaces set to open in fall 2021. Boland, who joined the Trust in 2001, has worked closely with the firm James Corner Field Operations and federal park staff on the $118 million project.

"For over 20 years the Presidio Trust has been restoring the open spaces of the Presidio, trying to take derelict sites like Quartermaster Reach and turn them into rich natural habitats," Boland notes in a new video the agency released online about the opening of the marshland to the public.

In the video Lewis Stringer, the Trust's associate director of natural resources, describes how the tidal marsh ecological restoration site is increasing the landscape's biodiversity with new habitat for shorebirds, fish, native oysters, mollusks, and other fauna and flora. The site currently resembles more of a mudflat, as it will take some time for the newly planted wetland to take hold.

"We're bringing biodiversity back into this landscape," Stringer says in the video. "You will see thousands of native salt marsh plants that have been planted out here over the last two weeks. We will have an incredible abundance of shorebirds where they will be able to feed and move on as they are migrating." 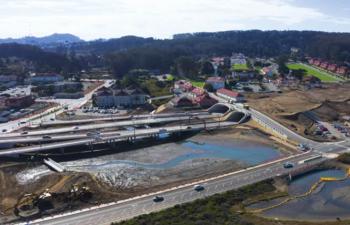 Boland notes in the video that the project wouldn't have been possible without Doyle Drive being "completely rebuilt." Removing the roadway's asphalt, contaminated soil underneath, and old pipes buried underground allowed park engineers to recontour the site, added Boland, "so water flows naturally up from the bay and connects with the Tennessee Hollow Watershed."

For 20 years the Trust has worked on the revitalization of the watershed, the Presidio's largest. It begins in the hills above the gurgling El Polin Spring and meanders via a revived creek that has been daylighted to now connect with the new Quartermaster Reach Marsh.

"So for the first time in over 100 years finally the water flowing from Tennessee Hollow is going to be connected to the SF Bay," Amy Chong, a biological science technician with the Presidio Trust, points out in the video.

The entire watershed is connected by hiking trails that are dog-friendly as long as canines remain on leash. Hiking maps can be downloaded online here.

"You will be to walk down on the boardwalk and be immersed in nature. You'll be surrounded by birds, beautiful plants, and beautiful woodlands," says Boland. "It will be easy to forget you are in the middle of San Francisco."