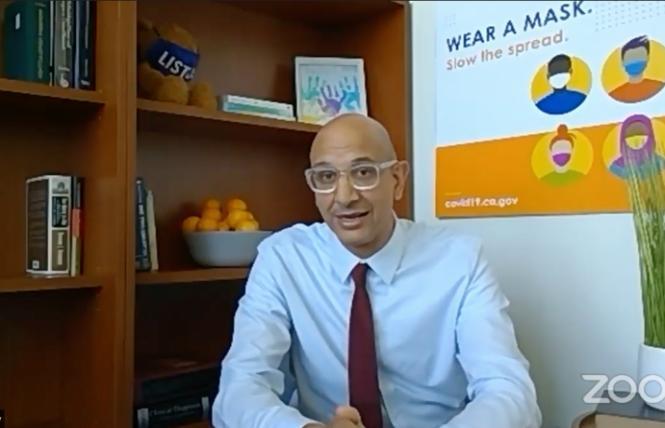 California health officials have now updated their tracking system online to include LGBTQ COVID data. It comes several days after San Francisco began asking COVID-19 test takers what their sexual orientation is in addition to their gender identity.

Monday, December 21, the California Department of Public Health announced that it had moved forward on starting to track the COVID SOGI data. In an advisory to the media, it noted that "as part of its commitment to reduce health inequities and ensure the best outcomes for all Californians, the state has launched a Health Equity Dashboard on www.covid19.ca.gov that tracks California's health equity measure and data by race and ethnicity, sexual orientation, and gender identity."

It can be found here and the data shown is a cumulative 30-day total, updated on December 17, 2020, according to a note affixed to the charts. It also clarifies that sexual orientation and gender identity are not collected for tests.

The state website also links to a separate page with information on how health departments can better collect the SOGI data that was compiled by the National LGBTQIA+ Health Education Center at Boston's Fenway Institute.

Two weeks ago San Francisco officials had informed the Bay Area Reporter they were working with their sponsored testing provider, Color, to expand the data requested at the time of testing or during registration to ask a question about sexual orientation. It makes San Francisco one of the few municipalities in the state to be collecting the SOGI data.

"SOGI data collection has been added to the city's testing site registration through Color lab," Clair Farley, a trans woman who is the director of the Mayor's Office of Transgender Initiatives, informed the Bay Area Reporter December 18.

According to a screen shot Farley sent to the B.A.R., those now signing up to get tested through one of the city's testing sites will be asked: "How do you best describe your sexual orientation or sexual identity?" Options include straight or heterosexual, lesbian, gay, or homosexual, bisexual, questioning, other, or prefer not to say.

A note informs people the CDPH "has requested this information to help understand the impact the virus has across the state." It comes prior to the question people were already being asked about what their gender identity is. The choices include "Trans Female," "Trans Male," or "Genderqueer/Gender Nonbinary."

"We want to thank the COVID Command Center (CCC) and the Color lab for working with us to update the city's testing sites to include vital sexual orientation and gender identity data collection," stated Farley to the B.A.R. "This will help us better track the impact of COVID on our LGBTQ communities and help us to address health inequities."

Law not fully implemented
As the B.A.R. first reported in November, state and most local health officials have not fully implemented a law Governor Gavin Newsom signed in September or regulations instituted in July by Dr. Mark Ghaly, the secretary of the California Health and Human Services Agency, aimed at asking everyone getting tested for COVID-19 to be asked the SOGI questions.

In an interview two weeks ago, Wiener had told the B.A.R. it was "horrifying San Francisco isn't implementing it of all places."

Wiener had also told the B.A.R. December 10 that he plans to send a legislative audit request to the Joint Legislative Audit Committee in order to examine how state health officials are collecting not only sexual orientation but also gender identity demographic data.

"We are now more than two months after SB 932 became the law, and as far as we can tell, CDPH has not made public any SOGI data around COVID-19. Indeed, based on my own personal experience and numerous reports from others, major COVID-19 testing sites are not collecting this data at all," wrote Wiener, who will be meeting with Pan this week. "SB 932 requires that all healthcare providers testing for COVID-19 collect this data. Yet, CDPH does not appear to have ensured that data collection, let alone publish it."

CA officials accuse panel of impeding the health of LGBTQ Americans
Sign up!