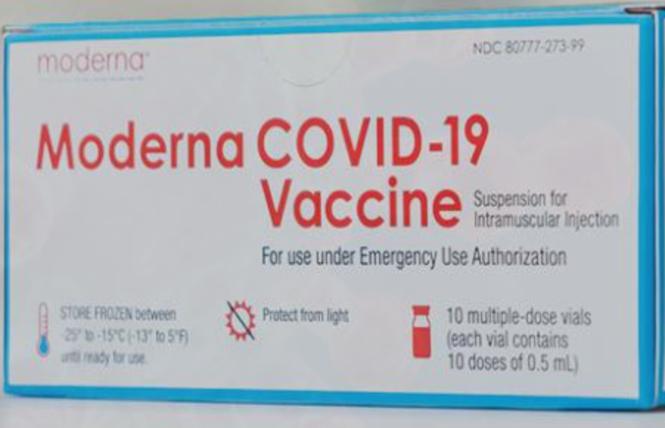 The federal Food and Drug Administration has approved Moderna's vaccine for COVID-19. Photo: Screenshot via Moderna.com

The federal Food and Drug Administration has granted emergency use authorization for a second COVID-19 vaccine, developed by the Cambridge-based biotechnology company Moderna and the National Institutes of Health, for people age 18 and up.

The second green light came December 18, as the first vaccine from Pfizer and BioNTech, approved just over a week ago, is rolling out across the country. Health care workers ranging from custodial staff to doctors began receiving vaccinations at UCSF and Zuckerberg San Francisco General Hospital. More are expected to begin receiving the Moderna vaccine starting this week.

The Moderna vaccine was developed with support from the federal government's Operation Warp Speed, and it will be distributed to Americans free of charge.

In a video posted to Twitter after Friday evening's announcement, Governor Gavin Newsom said that 672,000 doses of the new vaccine are on their way to California. Each recipient will need two doses, like the Pfizer vaccine.

"Our scientific safety review committee will take a look and make a determination as we did with the Pfizer vaccine — another set of eyes to look at the safety and the efficacy," Newsom said, referring the Western States Scientific Safety Review Workgroup, which was established to provide an extra layer of review after President Donald Trump pressured the FDA to approve a vaccine before the November 3 election.

"This is very good news [and] this will allow us to distribute even more vaccines, particularly to more underserved communities, more rural communities, [and] more remote communities in the state," Newsom said.

"Today, with confidence in science and at the direction of the Office of the Attending Physician, I received the COVID-19 vaccine," Pelosi wrote on Twitter. "As the vaccine is being distributed, we must all continue mask wearing, social distancing, and other science-based steps to save lives and crush the virus."

"I urge everyone, especially people of color who have suffered the most from this pandemic, to recognize that the risk of contracting COVID-19 far outweighs the understandable skepticism of this vaccine. I trust it, and I hope you will too," Lee wrote on Twitter.

Building public trust in this vaccine will be crucial if we want to turn the corner and crush this virus.

Today, I followed the recommendation of the Attending Physician of Congress and received the #COVID19 vaccine to ensure continuity of government. pic.twitter.com/dzjNUdGAUj— Rep. Barbara Lee (@RepBarbaraLee) December 19, 2020

Clinical trial results
The Moderna vaccine (known as mRNA-1273) and the Pfizer/BioNTech vaccine both use a novel mRNA approach. Nanoparticles, or fat bubbles, deliver bits of viral genetic material that encode instructions for making the SARS-CoV-2 spike protein, which the new coronavirus uses to enter human cells. When injected into a muscle, the cells produce the protein, triggering an immune response. The mRNA degrades quickly in the body and it does not interfere with human genes.

No mRNA vaccines have been previously approved by the FDA, but the platform has been in development for many years. Once Chinese researchers revealed the genetic sequence of the new virus in January, Moderna was able to produce a vaccine candidate within a matter of days.

"Several years before SARS-CoV-2 entered the public consciousness, [National Institutes of Allergy and Infectious Diseases] scientists were working with Moderna to develop vaccines for other coronaviruses," National Institutes of Health director Dr. Anthony Fauci said in a statement. "That existing scientific foundation is what enabled both partners to move quickly to develop the mRNA-1273 vaccine candidate against the novel SARS-CoV-2 coronavirus."

The Moderna vaccine was tested in a phase 3 clinical trial that enrolled a diverse population more than 30,000 adults. Most were at risk for COVID-19 due to their occupation, including 25% health care workers. About 20% were Latino, by far the most heavily affected group in San Francisco. Many had underlying health conditions, such as obesity, diabetes, or chronic lung disease, that put them at higher risk for severe COVID-19; 176 were HIV-positive.

The volunteers were randomly assigned to receive two doses of the vaccine or saline placebo injections spaced four weeks apart.

The vaccine was 94% effective at reducing the risk of symptomatic COVID-19. A total of 196 cases were observed: 185 in the placebo group and just 11 in the vaccine group. All 30 confirmed cases of severe COVID-19 occurred in the placebo group. The vaccine was effective across demographic groups, including people over age 65 — an important consideration because older people tend to mount a weaker immune response to vaccines.

What's more, the Moderna vaccine also appeared to lower the risk of asymptomatic infection by about two-thirds. The Pfizer/BioNTech trial did not test volunteers regularly for SARS-CoV-2 infection unless they developed symptoms.

It is not yet known how long vaccine-induced immunity against the coronavirus — or natural immunity after infection — will last. The ability of the vaccine to reduce infection and produce long-lasting immunity will be critical to halting the spread of the coronavirus and enabling people to resume pre-pandemic social and economic activity.

The Moderna vaccine was generally safe, though many study participants experienced mild to moderate side effects, especially after the second dose. Most reported injection site reactions such as soreness. Other common symptoms included fatigue, headache, muscle and joint pain, chills, and fever. Flu-like symptoms are not unusual after receiving vaccines and they are an indication that the immune system is working.

Shortly after the rollout of the Pfizer/BioNTech vaccine, a small number of health care workers in the United Kingdom and Alaska experienced severe allergic reactions after vaccination. Responding to concerns, the FDA and Centers for Disease Control and Prevention said these rare reactions should not derail vaccine rollout. However, a clinician with access to emergency supplies to manage anaphylaxis should be available at vaccination sites. People with a history of past severe reactions should be observed for 30 minutes post-vaccination and others for 15 minutes.

Vaccine rollout
Although COVID-19 vaccine development has proceeded with unprecedented speed, initial rollout has not been without challenges.

Many states reported that they have not received as many doses of the Pfizer/BioNTech vaccine as they expected. Pfizer indicated that it has millions of doses still available at warehouses but lacks instructions on where to send them.

This Pfizer/BioNTech vaccine requires ultra-cold refrigeration at minus 94-degrees Fahrenheit. Some doses sent to California had to be returned after tracking sensors indicated that temperatures were not maintained throughout the distribution process. Logistics will be simpler for the Moderna vaccine, which can be transported and stored at standard refrigerator temperatures (36- to 46-degrees Fahrenheit).

The U.S. has contracted to buy 200 million doses of the Moderna vaccine, in addition to 100 million does of the Pfizer/BioNTech vaccine. Federal, state, and local officials are scrambling to obtain more, but vaccines will remain in short supply for months.

Once health care workers and residents of long-term care facilities are vaccinated, there is still discussion about who should be next in line. Some experts argue that people over age 65 and those with underlying health conditions, who are at greatest risk of dying from COVID-19, should go first, as this would reduce pressure on hospitals and lead to a drop in mortality.

Others argue that frontline essential workers, who are at highest risk for coronavirus exposure, should go next. This approach would likely slow transmission and would give priority to the communities that have borne the brunt of the pandemic.

Skirmishes are inevitable as various groups lobby to move ahead in the line. For example, some want teachers to have priority so schools can open sooner. The San Francisco Unified School District and its teachers union announced December 18 that they had failed to reach an agreement that would allow classrooms to reopen in late January.

Even within the health worker category, medical residents at Stanford Medical Center protested last week after some administrators and senior medical faculty who work from home were vaccinated ahead of doctors-in-training who regularly treat COVID-19 patients; the university has issued an apology.

Based on current timelines, younger adults with no particular risk factors could start getting vaccinated in the spring. Most experts predict that herd immunity could occur after around 70% of people have been vaccinated. At that point, there would be too few susceptible people for the virus to spread easily.

Authorization of the Moderna vaccine will help reach this goal, but the projection assumes that additional vaccines — including one from AstraZeneca and the University of Oxford and a single-shot candidate from Johnson and Johnson — will also become available in the coming months.

But even as the supply ramps up, persuading the public that the benefits of vaccination outweigh the risks will be an ongoing challenge. Some people are spreading baseless conspiracy theories on social media and many of Trump's most ardent supporters say they won't get vaccinated.

"It is my hope that all Americans will protect themselves by getting vaccinated when the vaccine becomes available to them," Fauci said. "That is how our country will begin to heal and move forward."