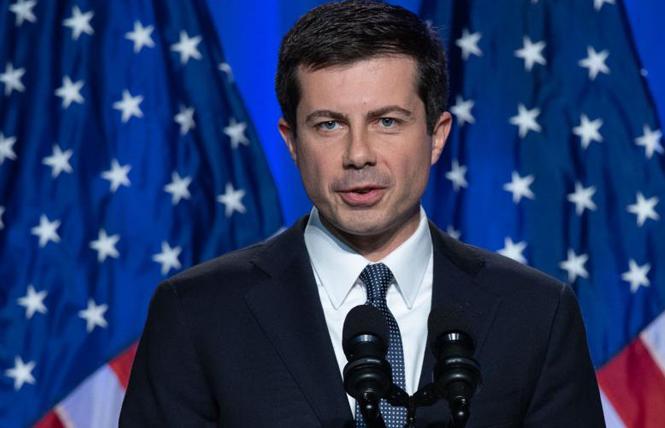 Pete Buttigieg is set to become the first LGBTQ cabinet secretary after being nominated as the 19th U.S. secretary of transportation by Biden December 15.

Biden's formal announcement followed reports on CNN and Politico earlier in the day that said Buttigieg would be tapped for the transportation post.

"Mayor Pete Buttigieg is a patriot and a problem-solver who speaks to the best of who we are as a nation," Biden stated. "I am nominating him for secretary of transportation because this position stands at the nexus of so many of the interlocking challenges and opportunities ahead of us. Jobs, infrastructure, equity, and climate all come together at the DOT, the site of some of our most ambitious plans to build back better. I trust Mayor Pete to lead this work with focus, decency, and a bold vision — he will bring people together to get big things done."

Buttigieg was formally introduced by Biden Wednesday morning in Delaware, where he said he was "humbled" by Biden's confidence in him.

"At its best, transportation makes the American Dream possible, getting people and goods to where they need to be, directly and indirectly creating good-paying jobs," he said.

Buttigieg, 38, burst onto the national scene last year with his landmark bid for the Democratic presidential nomination. He withdrew from the race March 1, throwing his support behind Biden, but not before becoming the first LGBTQ person to win a presidential nominating contest when he defeated Biden and others in the Iowa Caucus earlier this year.

As the Washington Blade reported last week, Buttigieg — a top Biden surrogate in the fall campaign — has turned down two prominent roles in the administration in recent weeks. Biden had pledged to be the first president to choose an LGBTQ member of the cabinet, saying on CNN two weeks ago, "I promise you, you'll see the most diverse cabinet, representative of all folks, Asian-Americans, African Americans, Latinos, LGBTQ, across the board."

Earlier this year, President Donald Trump chose Ric Grenell, a gay man, to be his acting director of national intelligence — a cabinet-level position but not a cabinet secretary.

Biden has long discussed the necessity of a federal infrastructure package, a plan that Buttigieg would be promoting, shepherding, and implementing if he becomes transportation secretary. 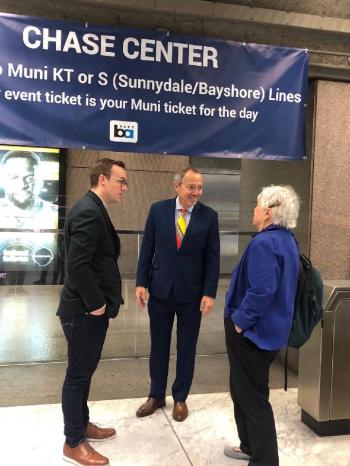 Bevan Dufty, a gay man who is a member of the BART Board of Directors, said that Buttigieg will be helpful in that regard.

"He's going to be a highly visible cabinet member," Dufty told the Bay Area Reporter. "That's good for transit. The Trump administration sat on an infrastructure bill for four years and there's a lot of need because of COVID. Pete will help us recover."

The LGBTQ Victory Institute, which has pressed for out people in the Biden-Harris administration, praised the news.

"Pete's nomination is a new milestone in a decades-long effort to ensure LGBTQ people are represented throughout our government — and its impact will reverberate well beyond the department he will lead," Annise Parker, president and CEO of the institute, stated shortly after the news broke. "It distances our nation from a troubled legacy of barring out LGBTQ people from government positions and moves us closer to the president-elect's vision of a government that reflects America."

Dufty, who used to represent the Castro neighborhood on the San Francisco Board of Supervisors, also reflected upon the historic nature of the appointment.

"I think it's fantastic to break a glass ceiling and have someone so smart leading the U.S. DOT," Dufty said, referring to the Department of Transportation. "As a BART director, I know he'll be good for transit, helping to get us moving again."

Despite a sometimes tense primary season — Biden and Buttigieg were both seen as leaders in the moderate wing of the party — the former vice president and the break-out novice to national politics mended fences, with Biden going so far as to say that Buttigieg reminded him of his late son Beau, who died of brain cancer in 2015.

Vice President-elect Kamala Harris, who was also once one of Biden's rivals for the presidential nomination, also praised Buttigieg.

"One of the most important parts of building America back better is ushering in a safe, modern, and sustainable transportation system that helps us grow our economy, tackle our climate crisis, and connect all Americans to jobs and opportunity," she stated. "Mayor Pete Buttigieg is an outstanding choice to help spearhead this work. An innovative problem solver and trailblazing public servant, Mayor Pete is deeply committed to bringing people together and upgrading our transportation system in a way that serves Americans of all backgrounds and communities of every size — urban and rural — across our country."

Updated, 12/15/20: This article has been updated to include the president-elect's formal statement.

Updated, 12/16/20: This article has been updated to include comments from Buttigieg.