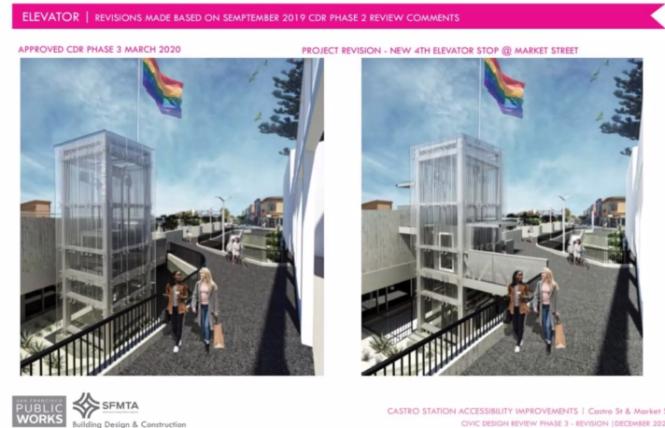 The planned elevator for the Castro Muni Station at Harvey Milk Plaza will have four stops, allowing people to get on it at Market Street, a spokeswoman for the San Francisco Municipal Transportation Agency told business leaders December 3.

When the Bay Area Reporter last reported on the project in July, the elevator was to have three stops, terminating at the plaza level.

The city's public works department is planning to install the new elevator in the middle of the plaza to provide better access to the underground subway station from the street for individuals who use wheelchairs and others with mobility issues. It is working in conjunction with SFMTA on the project.

The "newly designed accessible elevator is a $14.5 million project," Sweet told the merchants.

She added that the project has been delayed by the COVID-19 pandemic and is still in design review.

It was not immediately clear if the cost estimate Sweet provided is for just the elevator or other parts of the project. The B.A.R. previously reported that an estimated $15 million retrofit for the plaza will include the elevator, replacing the existing lighting fixtures, and removing the red bricks for sparkle grain integral color concrete that matches the paving installed when the sidewalks along Castro Street were widened. The plaza project will also widen a segment of the sidewalk fronting Market Street headed toward Collingwood Street.

Sweet did not return an email message following the meeting.

During the meeting, Sweet said that SFMTA will "continue to work with the community" on the project, which is expected to go out for bid next year. It is anticipated work will begin in the fall of 2021 on the three-year project, she said.

The elevator is still going to be transparent glass, as the B.A.R previously reported.

"We're excited; we think it's a great design," Sweet said.

In response to a question from a merchant about the project having minimal impact on businesses once construction starts, Sweet said SFMTA "is taking all of that into consideration."

The elevator project is separate from the Friends of Harvey Milk Plaza's proposed renovation of the plaza. That plan, estimated at $10 million, has been delayed. While preliminary designs for the plaza redo won approval from the city's arts commission, a final schematic is still years away from winning approval from the various city and regional oversight bodies that will need to sign off on it.

Additionally, a determination by San Francisco's planning department in July that Harvey Milk Plaza is historically important and eligible for listing on the California Register of Historical Resources may also affect the Friends' plans.

Andrea Aiello, executive director of the Castro/Upper Market Community Benefit District and board president of the Friends' group, did not return an email message seeking comment.

Brian Springfield, interim executive director of the Friends' group, said it was very pleased that the elevator project now includes the fourth stop.

"We are thrilled to see this increased accessibility added to the scope of the SFMTA project," Springfield wrote in an email. "During our outreach efforts, the community was determined to see that the space named for Harvey Milk should be accessible to everyone, as inclusivity was a core part of Harvey's message. In this instance, the community's vision has prevailed. We are very grateful to SFMTA for their willingness to listen and respond. This is a big win for the community, and a brilliant example of what we can achieve when we work together toward a common goal."

"Currently, we are working to identify a new design team to build on the work already done, and develop further the vision for honoring Harvey Milk at the Castro & Market intersection," he stated.

The historic determination for Harvey Milk Plaza should not impact the proposed elevator project for the Castro Muni Station.

Updated, 12/4/20: This article has been updated with comments from the Friends of Harvey Milk Plaza.