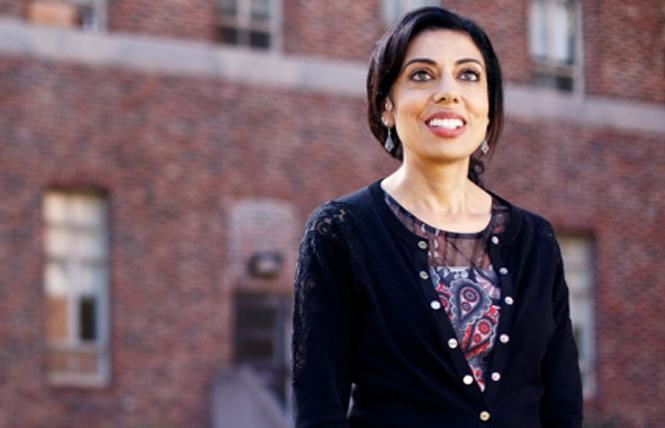 San Francisco has made good progress in reducing the number of new HIV diagnoses and promptly getting people into care, but COVID-19 threatens to roll back these gains, health experts said.

While people with HIV do not have a higher likelihood of acquiring the SARS-CoV-2 coronavirus and appear no more likely to develop severe COVID-19 or die from it, the new pandemic is having a detrimental effect on HIV prevention and care.

"The city is doing great in terms of COVID, but other things are falling by the wayside," Dr. Monica Gandhi, medical director of Ward 86, the HIV clinic at Zuckerberg San Francisco General Hospital, told the Bay Area Reporter. "I'm really concerned that the impact of this pandemic may stop us from keeping our eyes on the goal of combatting HIV."

Scott provided the B.A.R. updated numbers this week, showing that while testing has since increased, the number of tests in October was still 15% below last year's level. However, the proportion of people who have tested positive for HIV this year has remained steady at just over 1%. (The city's annual HIV epidemiology report, released September 10, summarized new HIV diagnoses during 2019 and care metrics for 2018. The data show a 19% decline in new cases, from 204 in 2018 to 166 in 2019. This followed a 13% decline between 2017 and 2018.)

Among people receiving HIV care, viral load testing decreased even more dramatically, falling by 57% in April. Again, declines were seen at most of the above sites as well as Kaiser Permanente, LabCorp, and Quest. After rising in June, tests dipped again, and the October number was 20% below last year's level.

What's more, people with HIV may be having trouble adhering to treatment. In response to the shelter-in-place order, about half of the visits at Ward 86 shifted to telephone check-ins, according to a report by Gandhi and colleagues published this week in the journal AIDS. After the transition, the likelihood of having a detectable viral load rose by 31% compared with pre-COVID levels, even though the number of appointments stayed about the same. People experiencing homelessness — who already had the lowest rate of viral suppression — saw an even larger increase.

Gandhi told the B.A.R. that the impact of the COVID-19 response, including social isolation and financial stress, may also be increasing susceptibility to HIV.

"It's a terrible, lonely time. We don't know the exact impact of COVID on susceptibility, but I suspect that in times of woe and misery, it is likely increased," she said. The city has seen an increase in sexually transmitted disease numbers and overdose deaths, suggesting ongoing risk for HIV via sex and injection drug use.

Vulnerable people like those seen at Ward 86 often receive multiple social services through HIV clinics, and "telehealth didn't end up working well for our population," Gandhi added. "That connection to a human being matters. I had a patient yesterday who said, 'you're the first person I've seen in six months.'"

PrEP use falls off
HIV prevention services have also seen a decline during the pandemic. PrEP visits at Magnet fell from more than 750 in January to just 65 in April. At Kaiser, the number of new PrEP prescriptions dropped by 59% in the second quarter of the year, Dr. Brad Hare, Kaiser's chief of infectious diseases and HIV, reported at the September 24 Getting to Zero Consortium meeting.

And San Francisco is not alone. Researchers from Fenway Health in Boston recently reported that between January and April, new PrEP starts declined by 72%, the number of clients receiving PrEP declined by 18%, and sexually transmitted disease testing decreased by 85%.

"People are getting mixed messages," Hare said. "At first we counseled people not to come in. Now we're asking people to come in, but we're finding many are still scared."

Magnet has continued to prioritize PrEP and STD care during the pandemic, Janessa Broussard, RN, SFAF's vice president of medical affairs, told the B.A.R. The clinic has made adjustments that allow staff to safely see 70 people per day by appointment, down from 100 a day before COVID; walk-in visits have been suspended.

People currently receiving PrEP can often get their prescription extended with less frequent HIV and STD testing. But some are choosing to stop PrEP. A recent Magnet client survey revealed that about 15% reported discontinuation and 11% switched from daily PrEP to on-demand dosing before and after sex. Of those who stopped, nearly 40% felt they were no longer at risk for HIV.

"We saw a dip in requests for PrEP enrollments in the weeks following the start of shelter-in-place, but there has been an increased demand since then, and PrEP starts are close to pre-COVID levels," Broussard said. "Our PrEP navigation team has worked tirelessly to coordinate the changing needs of clients, such as loss of employer-based insurance coverage and switching pharmacies to allow for medications to be delivered."

Experts agree that with precautions in place, it's safe for people to return to care.

"We have had some clarifications around what's considered an essential service, and HIV prevention and care are essential services — it's not something we consider elective," Scott told the B.A.R. "Clinics have protocols in place to maintain the safety of both the patients and the staff."

It remains to be seen how the pandemic will ultimately affect the numbers in next year's HIV epidemiology annual report. Effective COVID-19 vaccines are on the horizon, but experts predict it will be several months before the population is fully vaccinated.

"We know there's less access to HIV testing and that there have been some breaks in treatment for some individuals and in PrEP for others," Scott said. "It's still unclear how this is going to change our trajectory for getting to zero. We really want to encourage people to seek care for HIV prevention and testing. We're all still figuring this out as the pandemic unfolds."