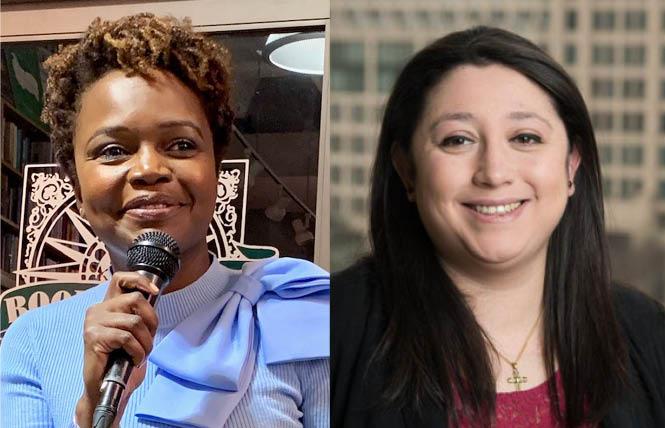 Two prominent lesbians of color have been appointed to major roles in President-elect Joe Biden's communications department, the transition team announced in a news release November 29.

Karine Jean-Pierre, who served as a Biden senior adviser before becoming chief of staff for Vice President-elect Kamala Harris during the campaign, will become principal deputy press secretary.

The two join five other women to make up the seven person all-female communications staff.

"Communicating directly and truthfully to the American people is one of the most important duties of a president, and this team will be entrusted with the tremendous responsibility of connecting the American people to the White House," Biden stated. "I am proud to announce today the first senior White House communications team comprised entirely of women. These qualified, experienced communicators bring diverse perspectives to their work and a shared commitment to building this country back better."

Added Harris, "Our country is facing unprecedented challenges — from the coronavirus pandemic to the economic crisis, to the climate crisis, and a long-overdue reckoning over racial injustice. To overcome these challenges, we need to communicate clearly, honestly, and transparently with the American people, and this experienced, talented, and barrier-shattering team will help us do that. These communications professionals express our commitment to building a White House that reflects the very best of our nation."

During the presidential campaign, Jean-Pierre was a senior adviser and then chief of staff to Harris, making her the first Black person and first lesbian to hold that position for a vice presidential nominee. She had previously been a staffer in President Barack Obama's administration and in his reelection campaign.

In an earlier interview with the Bay Area Reporter the first generation Haitian American discussed her family life with her partner, CNN national correspondent Suzanne Malveaux and their then 5-year-old daughter, Soleil. Previously, Jean-Pierre served as chief public affairs officer for MoveOn.org and has been a frequent cable talk show guest.

"With the historic nomination and appointments of key members to his cabinet, President-elect Joe Biden and Vice President-elect Kamala Harris are returning experienced and diverse leadership to the White House and our government," said HRC President Alphonso David in a prepared statement. "Together, these unquestionably qualified leaders will work to build back our economy and advance America's moral leadership at home and abroad."

US Senate expected to take up out judicial nominees
Sign up!