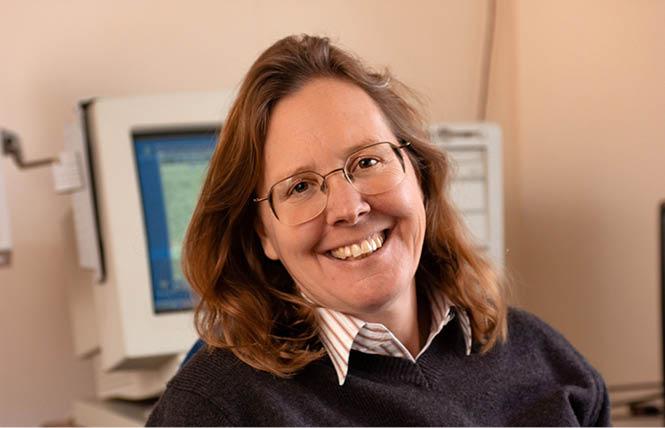 Deb Price, the award-winning journalist and author who wrote the first nationally syndicated column on LGBTQ issues in mainstream newspapers, died November 20 at a hospital in Hong Kong, where she had lived for many years. She was 62.

The cause of death was interstitial pneumonitis, according to Joyce Murdoch, her wife, who was with Ms. Price when she died.

In addition to her work at the Detroit News, Washington Post, and the Wall Street Journal, Ms. Price also taught journalism at Harvard and wrote a number of best selling books, two with her wife.

In an email to the Bay Area Reporter, Murdoch stated that Ms. Price was diagnosed with the autoimmune disorder nine years ago. "It gradually diminished her lung capacity" but "she remained energetic and optimistic," Murdoch wrote.

"She lived life fully, including working at the Hong Kong South China Morning Post" until shortly before she was hospitalized September 3.

Joshua Benton, founder and director of the Nieman Journalism Lab at Harvard University and a longtime investigative reporter at the Dallas Morning News, knew Ms. Price when she was a Neiman fellow at Harvard in 2011.

Posting on Twitter, Benton wrote that Ms. Price was a "was a real trailblazer for LGBTQ people in newsrooms and around the country."

Discussing Ms. Price's nationally syndicated column, Benton said, "It's hard to overestimate how significant this was. This was long before the internet gave Americans a window into any topic or community they wanted. Most people got a huge share of their information about the world from the local daily and local TV news.

"Most Americans in 1992 said they don't know a single gay person," Benton added. "Then suddenly there was Deb, on the breakfast table next to the sports section. She wasn't just running in NYC and SF, either — she was reaching people in red states, too."

Prominent LGBTQ journalist Tracy Baim, publisher of Chicago's alternative weekly, the Reader, said, "The mainstream news business was quite closed to openly LGBTQ reporters even into the 1990s."

Baim, who co-founded Windy City Times LGBTQ newspaper in 1985, added, "When Price's nationally syndicated column began it was truly groundbreaking. It ran in the Chicago Sun-Times, and many other papers, bringing an openly lesbian voice to parts of the U.S. that still had very nascent LGBTQ power structures. Her voice was not just historically critical, but it was also very good."

Among the positions held by Ms. Price were managing editor of Caixin Global, China's independent financial publication; Asia commodities editor and Asia finance and markets editor at the Journal; White House and congressional correspondent and deputy bureau chief at the News; and editor at the Post.

Ms. Price and Murdoch met while at the Post. The couple married in Toronto on June 27, 2003, "the first place on the planet that non-resident American gay couples could marry. We were among the very first American couples to be legally married," Murdoch wrote. Earlier, they'd had a civil union in Vermont and before that, were the first same-sex couple to have a registered partnership in Tacoma Park, Maryland, which, she noted, "was legally meaningless but important nevertheless at the time."

Murdoch and Ms. Price were the first same-sex couple to have their marriage announced on Post's wedding page.

"That was a battle I waged because earlier the Post's bigwigs had declared that gay couples getting civil unions (something Deb and I never had) were barred from the weddings page because they were not in legal marriages," Murdoch wrote. "Once our marriage was legal, I went all the way up to [then-publisher] Donald Graham to press the Post to follow its own rules: Recognizing legally married couples. It did. Beating the New York Times and other major papers in making that change.

"And our breakthrough was announced on the CNN news crawl. ... And other couples then got there marriages announced by the Post and other places fairly routinely. And many of them wrote to thank us," Murdoch added.

Ms. Price and Murdoch authored two books, both well reviewed. In 1996, they wrote "And Say Hi to Joyce" and in 2002, "Courting Justice: Gay Men and Lesbians v. the Supreme Court."

On Facebook, Murdoch wrote, "Deb lived energetically, optimistically, bravely, and fully. Her 18 years as a groundbreaking gay columnist changed lives, healed families, and helped our nation progress toward being a more perfect union.

"She was the center of my universe. So much of what I've achieved personally and professionally was possible because Deb believed in me, encouraged me, loved me," she continued. "For 35 years we were a helluva team. She will live on in my heart forevermore."

In her email, Murdoch stated, "Deb and I always felt that it was our obligation to use whatever power her column gave us personally and professionally to try to make strides for all LGBT folks."

Murdoch said she hopes to become a Hong Kong permanent resident, a status that would allow her to be there as much as she chooses.

Post pandemic, Murdoch hopes to split her time between Hong Kong; Cambridge, Massachusetts, where the couple also had a home; and traveling to see friends.