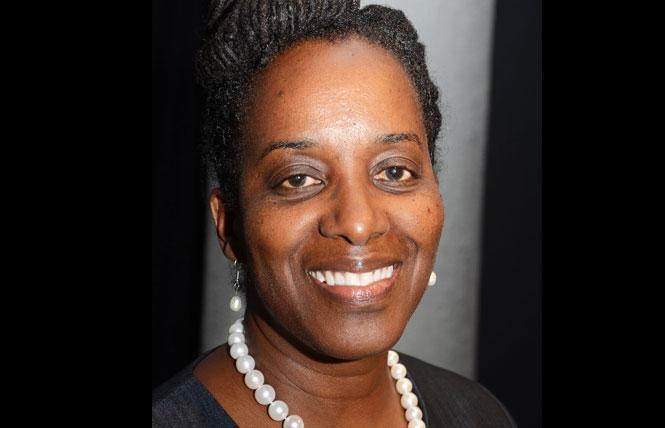 Jovanka Beckles will be sworn in on the AC Transit Board of Directors December 4. Photo: Rick Gerharter

Another ritual has been upended this year by the COVID-19 pandemic: political swearing-in ceremonies. Normally a time for local politicians to celebrate together with their family and supporters inside their governing chambers, the administering of the oath of office to the winners of the November 3 races will largely be done virtually throughout December.

One of the first LGBTQ officials to be sworn in will be Jovanka Beckles, a lesbian former Richmond city councilwoman elected to the Ward 1 seat on the board of the AC Transit regional transportation system that runs buses in both Alameda and Contra Costa counties. Her ceremony will take place live on Zoom at 12:30 p.m. Friday, December 4.

"This is a victory for a vision of public transit as a vehicle of racial, economic, and environmental justice. It's a victory for the idea that public transit is a human right, not a commodity," wrote Beckles in an email inviting her supporters to watch the online event. "But our battle is just beginning — we're going to need to fight to stop cuts, stand up for workers, and win fare-free service. That's why I hope you will stay connected to what's happening on the AC Transit board."

To find the link to join the Zoom meeting, go to https://actransit.legistar.com/Calendar.aspx

Also set to take his seat next week is gay Berkeley City Councilman-elect Terry Taplin. He will be sworn into the council's District 2 seat at 6 p.m. Tuesday, December 1. For information on how to watch the meeting online, go to https://www.cityofberkeley.info/berkmtg/

The second week of December will see a slew of out non-incumbent city councilmembers-elect from around the Bay Area take their oaths of office. Monday, December 7, Lissette Espinoza-Garnica will be sworn into the newly created District 3 seat on the City Council in Redwood City, becoming the Bay Area's first nonbinary city council member.

Also taking their oath that night will be gay City Councilman-elect Michael Smith, elected this month to Redwood City's newly created District 4 council seat. The meeting will begin at 7 p.m. For a link to watch it go to https://www.redwoodcity.org/city-hall/city-council

The next evening will see several out freshmen councilmen-elect take their oaths. In the East Bay, gay Pinole City Councilman-elect Devin Murphy will take his oath of office virtually at 6 p.m. Tuesday, December 8. It will be shown live via Pinole Community Television, which can be accessed via https://www.ci.pinole.ca.us/city_government/pinole_tv

On the Peninsula, bisexual South San Francisco City Councilman-elect James Coleman told the Bay Area Reporter he also will take his oath of office December 8 and then take part in his first council meeting the next evening. For information about how to watch, go to https://www.ssf.net/departments/city-clerk/city-council-meetings

Also that night in the South Bay, gay Santa Clara City Councilman-elect Anthony Becker will be sworn into the body's newly created District 6 council seat. The ceremony will either take place at 5 or 6 p.m., Becker told the B.A.R., and be broadcast via Zoom.

"I am waiting for the time," replied Becker, who previously had lost his bid for mayor two years ago and a citywide contest for a council seat in 2016. "But yes 3rd time is a charm!"

And in the North Bay, Sausalito City Councilwoman-elect Janelle Kellman is expected to take her oath of office at 7 p.m. that night. She has been the chair of the city's planning commission and will be the only openly LGBTQ member on the council.

A link to watch the meeting can be accessed via https://www.sausalito.gov/city-government/city-council/meetings-and-agendas

Brittni Kiick, a bisexual married mother of two, who also identifies as pansexual, will become the first LGBTQ person to serve on the Livermore City Council in the East Bay's Tri-Valley area Monday, December 14. The meeting is set to begin at 7 p.m. and a link to watch it will be posted at https://www.cityoflivermore.net/citygov/clerk/archive/default.htm

Hers will be a hybrid of some people taking part in person while she and two other councilmembers join from their homes via Zoom. The city's current mayor, mayor-elect, and an outgoing councilmember will be using Livermore's new Civic Center Meeting Hall for the first time since it was completed in the spring.

"Basically the current mayor and other councilmember who didn't run want to hold one meeting in our new council chambers before they are gone," explained Kiick. "The building was completed in April, I believe, so no one got to use it due to COVID. I get it for them but there is no reason for me to be there so I will Zoom in along with other councilmembers."

One of the last newly elected council people to be sworn in will be queer Sunnyvale City Councilwoman-elect Alysa Cisneros. The council has scheduled its administering the oath of office to the incoming councilmembers for Tuesday, January 5.

The agenda for it, with details about its start time and how to watch it online, will be posted at https://sunnyvaleca.legistar.com/Calendar.aspx

Melissa Shuen-Mallory is a nonbinary queer femme who won the Trustee Area 2 seat on the New Haven Unified School Board. They live with their wife in Union City in Alameda County.

Felicia Agrelius, director of LGBTQ+ youth programs at the Spahr Center, won the Area 4 seat on the Marin Board of Education. As she told the local newspaper, at 25 years old, she is "the first millennial queer person to be elected into public office in Marin County."

Due to the Thanksgiving holiday, the Political Notes column will return Monday, December 14.