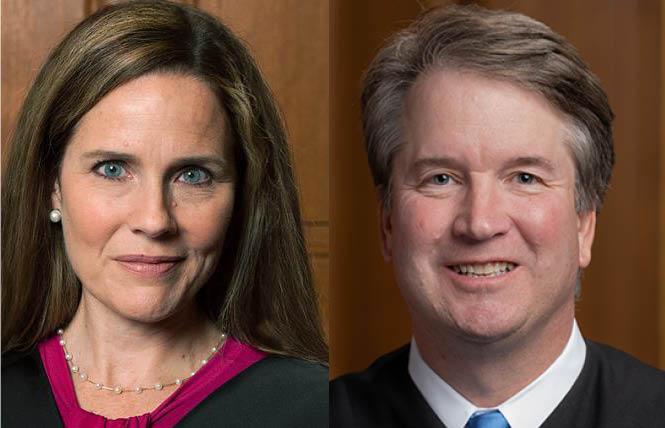 An important oral argument at the U.S. Supreme Court this month went largely overlooked because of the nation's nearly complete fixation on the outcome of the 2020 presidential election. But statements and questions by some conservative justices during that argument — coupled with the new solid majority conservatives have on the court — have left LGBTQ legal activists feeling a bit unnerved.

Among other things, two justices claimed that the court's 2015 ruling striking down state bans on same-sex marriage made "promises" that future Supreme Court decisions would show "respect for religious beliefs" hostile to same-sex marriages.

The two-hour hearing November 4 in Fulton v. Philadelphia is the latest in a long line of lawsuits that have attempted to secure an exemption for some people and businesses to laws prohibiting discrimination based on sexual orientation and gender identity. Those arguing for the exemptions claim that requiring they obey the non-discrimination laws violates their First Amendment freedom to exercise of their religious beliefs that they should discriminate against LGBTQ people.

Opponents of such arguments say people and businesses have a First Amendment right to believe what they want, but if they voluntarily operate in the public arena, they must abide by laws governing the public, including laws prohibiting discrimination based on sexual orientation and gender identity.

In Fulton, the city of Philadelphia discovered that one of its contractors performing foster care placement services had a policy of denying consideration of same-sex couples to serve as foster parents. That contractor, Catholic Social Services, acknowledged it had such a policy but said no same-sex couple had ever approached it so it couldn't be accused of discrimination. When its contract with the city came up for renewal, the city declined to continue it, saying CSS was in violation with the contract's stipulation that contractees comply with laws prohibiting discrimination on the basis of numerous factors, including sexual orientation.

The Beckett Fund for Religious Liberty filed a lawsuit for CSS and two parents who had served as CSS foster parents, including Sharonell Fulton. They lost in the district court and in the 3rd U.S. Circuit Court of Appeals. The three-judge panel at the 3rd Circuit, which included a Reagan appointee, said the "city's non-discrimination policy is a neutral, generally applicable law, and the religious views of CSS do not entitle it to an exception from that policy."

CSS then appealed to the U.S. Supreme Court.

The signs of moderation
At the very top of oral arguments (which can be heard or read at the Supreme Court's website), Chief Justice John Roberts struck a note that many LGBTQ people would probably take as a good sign. He referred to the Supreme Court's 5-4 decision in Obergefell v. Hodges, striking down state bans on marriage for same-sex couples.

The Fulton case, he said, "is a case involving free exercise rights, but ... they're in tension with another set of rights, those recognized in our decision in Obergefell. And whatever you think or however you think that tension should be resolved as a matter of government regulation, shouldn't the city get to strike the balance as it wishes when it comes to setting conditions for participating in ... its foster program?"

Justice Neil Gorsuch also challenged CSS attorney Lori Windham, noting "the city seems to be representing to us ... that the [non-discrimination ordinance] is binding of its own force and that the department can't offer any exemptions." Later, to the Trump administration's Deputy Assistant Attorney General Hashim Mooppan, he asked, "What do we do with the Fair Practices Ordinance and the argument by the city — and we normally take their representations about their law with — with some respect — that the Fair Practices Ordinance applies by its own force and that there are no exemptions here?"

Roberts and Gorsuch have, so far, established moderate records on LGBTQ issues before the court.

The conservative attack
But the established conservatives on the bench seemed eager to score points as such. Justice Samuel Alito was blunt about where he stands, saying, "if we are honest about what's really going on here, it's not about ensuring that same-sex couples in Philadelphia have the opportunity to be foster parents."

"It's the fact that the city can't stand the message that Catholic Social Services and the archdiocese are sending by continuing to adhere to the old-fashioned view about marriage," said Alito. "Isn't that the case?"

"Absolutely not," said Neal Katyal, the attorney representing Philadelphia. He pointed out that both the district court and the appeals panel "rejected that idea" and noted that the city still gives CSS some $26 million per year for other services, "which is hardly something demonstrating religious hostility."

Justice Brett Kavanaugh took a different approach, giving voice to a notion that the Supreme Court majority in Obergefell (three years before he joined the bench) made explicit "promises" to have "respect for religious beliefs" that oppose same-sex marriages.

Masterpiece Cake v. Colorado, decided three months before Kavanaugh was sworn in, was 7-2 in favor of a Colorado baker who refused to sell wedding cakes to same-sex couples claiming it was against his religion to do so.

"What I fear here," said Kavanaugh to Katyal, "is that the absolutist and extreme position that you're articulating would require us to go back on the promise of respect for religious believers."

Katyal did not react to the "explicit promise" remark but assured Kavanaugh "both of these rights are important."

"I don't think the framing of this as religion versus same-sex equality is the right one," said Katyal. "The way the city sees this is actually a case about religion versus religion because, if you accept what [the CSS] argument is, then [that would] allow another [foster care agency to] say 'We won't allow Baptists, we won't allow Buddhists.' ... And, in that sense, religion will be pitted against religion. ... And this will be true, not just in foster care but, in any number of other areas in which the government contracts."

Katyal's point was a sentiment that Justice Stephen Breyer voiced too. If CSS prevails, he said, "it's pretty hard to see how all kinds of government programs can exist with every religion making exceptions every which way for all kind of reasons."

Jenny Pizer, a senior counsel for Lambda Legal Defense and Education Fund, which filed a brief in support of groups serving LGBTQ youth, said Kavanaugh's interpretation of Obergefell was "conveniently dropping the second part" of what its author, Justice Anthony Kennedy, wrote. Kennedy's language, she said, "is the opposite of a promise to allow continued discrimination based on those anti-LGBT religious beliefs."

In Obergefell, Kennedy wrote, "it must be emphasized that religions, and those who adhere to religious doctrines, may continue to advocate with utmost, sincere conviction that ... same-sex marriage should not be condoned. The First Amendment ensures that religious organizations and persons are given proper protection as they seek to teach the principles that are so fulfilling and so central to their lives and faith. ... In turn, those who believe allowing same-sex marriage is proper or indeed essential, whether as a matter of religious conviction or secular belief, may engage those who disagree with their view in an open and searching debate. The Constitution, however, does not permit the state to bar same-sex couples from marriage on the same terms as accorded to couples of the opposite sex."

Kavanaugh, said Pizer, was "taking half of Justice Kennedy's respectful observation about some religious believers and conveniently dropping the second part of the comment — that when those views are made into government policy it wrongfully excludes and stigmatizes the religiously disfavored group."

Leslie Cooper, deputy director of the American Civil Liberties Union's LGBT & HIV Project, said CSS is essentially asking the Supreme Court to create a "constitutional right to discriminate against us in every aspect of our lives" and "open the door to discrimination in any taxpayer-funded program."

Ginsburg had the Supreme Court's most pro-LGBTQ record; Barrett is expected to align closely with the court's conservatives — Alito, Kavanaugh, and Justice Clarence Thomas, all of whom are Catholic. (Roberts and Justice Sonia Sotomayor are also Catholic, and Gorsuch was raised Catholic but now identifies as Episcopalian. The other two justices on the court — Breyer and Elena Kagan — are Jewish.)

Possible radical rewrite
"Many of her questions," said Minter of Barrett, "were designed to lay a foundation for a radical rewriting of existing law, in a way that could have far-reaching negative implications for our community and other marginalized groups."

As an example, Minter noted that Barrett asked Katyal a question about the nature of the relationship between Philadelphia and the CSS — whether it was a government giving a contract or a government regulating a service through granting license. A government awarding contracts could, presumably, have great leeway in deciding the criteria it seeks in potential contractees who would be doing specified work on the city's behalf. Regulating a field of service, through awarding of a license, would enable the government to set certain standards but would dictate the operation of the licensee.

Barrett asked Katyal, "Is it possible for any entity to participate in the recruitment and certification of foster families without a contract from the city?"

Katyal said no, not when it comes to selecting "who cares for the kids in city custody."

"The whole point of the modern foster care system," he said, "is to bring responsibility for those kids inside the government and not leave it into private hands. These are wards of the state, and the city has the highest interest in screening parents.

"When someone is licensed — like to practice law or run a barber shop," said Katyal, "they are not carrying out the government's work. They're performing their own work, a private profession, with the permission of the government." The relationship between Philadelphia and CSS, said Katyal, was not like licensing a business but about performing work for the city to care for children who are wards of the state.

"Do we still say this is a licensing question or, given that the Catholic hospital can't even enter the business without this contract, do you still say this was the provision of a contractual service?" asked Barrett.

Katyal was not given time to answer Barrett's hypothetical fully, but he pointed out a couple of key differences between Barrett's hypothetical and CSS. He noted, for instance, that CSS still receives $26 million a year from Philadelphia to run homes for children, so it can't be said that the city is putting CSS out of the business of foster care.

What troubled NCLR's Minter was Barrett's "apparent endorsement of the idea that the city of Philadelphia is not contracting with Catholic Charities to perform governmental services but rather 'licensing' them," which limits the government's power to enforce its non-discrimination protections.

"If the court were to adopt that view," said Minter, "it would work a radical change in the law governing governmental services and open the door to unprecedented government-funded discrimination."