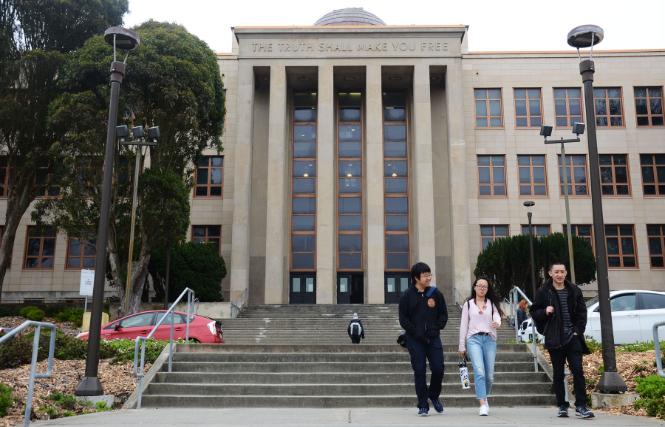 A new certificate program in public safety centering the LGBTQ community unanimously passed the San Francisco City College Board of Trustees at its November 12 meeting.

Two City College professors launched the program, which is probably the first of its kind in the country.

Ardel Thomas, longtime chair of the college's LGBT Studies Department, told the Bay Area Reporter that the idea came to them while talking with Greg Miraglia, an administration of justice instructor, after the police killing of George Floyd earlier this year that renewed discussions of how law enforcement treats minority groups.

"Greg and I were talking and I said, 'Greg, nobody's got a combined degree of Administration of Justice and LGBTQ,'" Thomas, who is nonbinary and trans, said during a phone interview. "He said 'my God, you're right.' In the state of California, first responders have to have LGBTQ+ training. I said, 'this would be a perfect time for us to thoughtfully put together a combined certificate of 18 units.' So what we did was look at administration of justice, saw courses that would work, and developed ADMJ 55 specializing on law enforcement and the LGBTQ+ community and successfully got it through the curriculum process."

Miraglia, who had a career in law enforcement, said he helped draft the legislation — which became law last year — requiring LGBTQ-specific training for law enforcement. As the B.A.R. reported in October 2018, Assembly Bill 2504 was introduced by gay Assemblyman Evan Low (D-Campbell) and was signed into law by then-Governor Jerry Brown.

It requires the California Commission on Peace Officer Standards and Training to develop a course of training for peace officers and dispatchers on issues related to sexual orientation and gender identity differences in order to create a more inclusive workplace and improve law enforcement's effectiveness in serving the LGBTQ community.

"[The courses] will serve not only law enforcement officers but also firefighters and [emergency medical technicians] very well," Miraglia said.

According to the certificate requirements that Miraglia sent to the B.A.R., the other administration of justice courses students would have to take are ADMJ 54-Principles and Procedures of the Justice System, ADMJ 57-Introduction to Administration of Justice and ADMJ 64-Progressive Policing in the 21st Century.

"Criminal procedure is important for a potential activist because it talks about how the system works, and how you can create change, specifically" Miraglia said. "Progressive policing talks about how law enforcement should be engaging with the community in the 21st century context. So it's a nice package for criminal justice proficiency."

Thomas said that the certificate requirements are rounded out by six units from their department: LGBT 50-Lesbian/Gay/Bisexual/Transgender/Communities of Color in the U.S. and LGBT 18-Transgender Lives, Culture, and Art.

"We wanted to make sure the two LGBT classes would be focused on people of color," Thomas said. "We are at this moment where people are looking at intersectional ideas of racism, homophobia, and transphobia and that's why we picked LGBT 50. Greg and I talked and asked 'should Intro to LGBT studies be the other one?' We answered 'No. The community with the most trouble with policing and social justice issues is covered in the transgender lives class.'"

Thomas said that the certificate program is 18 total units because "you need a certain number of units to qualify for federal financial aid — you can do a little nine-unit certificate if you want but this helps incentivize it."

Thomas said that while a lot of focus is still on policing, other first responders sometimes fail to be sensitive to the needs of LGBTQ people.

"Five or six years ago a nonbinary, trans student had a seizure. They had no bracelet and I had no idea why," Thomas recalled, referring to the medical alert IDs people who suffer seizures often wear. "Firefighters showed up and misgendered the person even though we said they are nonbinary. They asked 'is this a boy or a girl' and I said 'they're not.' And then they literally didn't do anything for the person. This was here in San Francisco. Imagine if it'd been in Oklahoma — where I grew up."

Thankfully, Thomas said, two trans women who used to serve in the U.S. armed forces "carried them over the shoulder and took them to St. James Infirmary." That nonprofit serves trans and nonbinary people.

"The student ended up being OK but those are the kinds of situations you see all the time," Thomas said.

Both Thomas and Miraglia said this is the first certificate of its kind in the country that they know of, and certainly the first in California. The two have collaborated on various projects since 2010, they said.

Miraglia said he hopes it should be available for students beginning in fall 2021. Thomas said, however, that students can start taking courses for the certificate next semester.

Miraglia said earlier this week that it is "my understanding is that the approval will come almost immediately once CCSF enters the program and course into the chancellor's office system. There isn't a special date or meeting required to approve it. Approvals are ongoing."

The City College board of trustees approved the certificate program during its regular approval of curriculum changes.

Tom Temprano, a gay man who is vice president of the college board, told the B.A.R. why he supports it.

"City College's Public Safety LGBTQ+ Certificate will be the first of its kind in the country and will help to educate those in public safety careers about the unique experiences of our queer community and what safety means to us," he said. "I'm grateful to our Administration of Justice and LGBT Studies departments for collaborating on this new certificate and to my colleagues for their unanimous support for this groundbreaking program."

Thomas said they hope the certificate will lead to practical change.

"We want to begin to address what we hope is a positive change in the first responder community," they said. "What's going on cannot continue."

Guest Opinion: City College is excited to welcome our students back for fall semester
Sign up!