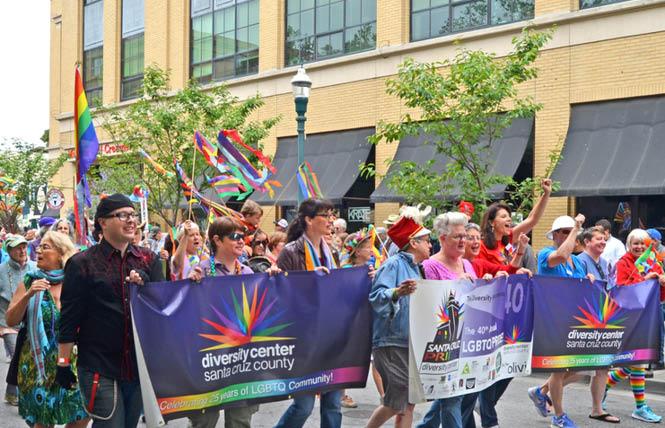 Santa Cruz Diversity Center supporters marched in a Pride parade; the organization is one of several suing the Trump administration over the president's ban on diversity training. Photo: Courtesy the Diversity Center

Joe Biden's election to the United States presidency last week will not stop a lawsuit that attorneys with Lambda Legal Defense and Education Fund have filed to overturn an executive order from President Donald Trump banning some diversity training in federal agencies and their contractors.

The suit, Diversity Center v. Trump, was filed November 3 in the U.S. District Court for the Northern District of California.

"The case has not yet been scheduled for a hearing, as the complaint has just been filed," Karen L. Loewy, a straight ally who is a senior attorney with Lambda Legal, told the Bay Area Reporter. "While we hope this executive order will be among those that President-elect Biden will rescind in the earliest days of his administration, the harm is being felt immediately, and while the executive order remains in effect, we will be looking to the courts to uphold the constitutional rights of our clients and protect the vulnerable LGBT populations they serve and care for."

The suit is a response to Executive Order No. 13950, which was issued by Trump September 22.

The order seeks to end the use of critical race theory in diversity training.

"Many people are pushing a vision of America that is grounded in hierarchies based on collective social and political identities rather than in the inherent and equal dignity of every person as an individual," it states. "This ideology is rooted in the pernicious and false belief that America is an irredeemably racist and sexist country; that some people, simply on account of their race or sex, are oppressors; and that racial and sexual identities are more important than our common status as human beings and Americans."

"Our clients are already being harmed by the administration's actions, having trainings canceled and federal funding withdrawn," Loewy wrote. "We brought the case because the critical, life-saving work of our plaintiffs — LGBT community centers, health care providers, HIV/AIDS service organizations, advocates for LGBT seniors, and a consultancy working in the juvenile and criminal justice systems — depends on being able to train people about the role of implicit bias in contributing to disparities, and to explicitly acknowledge and confront systemic racism, sexism, and anti-LGBT bias."

The lawsuit was filed on behalf of myriad LGBTQ organizations, including the Diversity Center, the Los Angeles LGBT Center, the AIDS Foundation of Chicago, and Services and Advocacy for GLBT Elders, or SAGE.

"For reasons of ideology and partisan advantage, President Donald J. Trump and others in his administration have labeled trainings and grant-funded work that incorporate such concepts 'offensive' and 'un-American' for calling attention to the lamentable extent to which the nation still fails to live up to its ideals," the federal complaint states.

"The president has declared by fiat that the country is not racist or sexist, and has sought to silence speech calling out these failings. Seeking to leverage the federal government's vast reach throughout the economy to control private thought and speech, the president has instructed federal agencies to condition federal contracts and grants — including those completely unrelated to the trainings at issue — on parties' commitment to silence themselves regarding these concepts," the complaint states.

The lawsuit alleges that the executive order violates the First Amendment to the U.S. Constitution by violating the plaintiffs' right to freedom of speech and the Fifth Amendment's due process clause because the order is "unconstitutionally vague."

Darrel Cummings, the chief of staff for plaintiff the LA center, stated in a November 5 news release that "you cannot segregate LGBTQ equality from racial justice." Cummings claimed the order prevents the center from doing its work.

"Core to our mission is training other providers — from foster youth organizations and medical professionals to those who work to end homelessness — to ensure that, whichever door our community uses to access essential services, those services are provided in an LGBTQ culturally responsive manner," Cummings wrote. "You simply cannot do this work without addressing institutionalized racism which LGBTQ, Black, and Indigenous people of color have experienced historically and continue to face every day."

Gil Diaz, the media and public relations director for the center, wrote that "the center will continue to fight like hell for our community — no matter the election results."

The White House and the office of the president-elect did not respond to requests for comment as of press time.