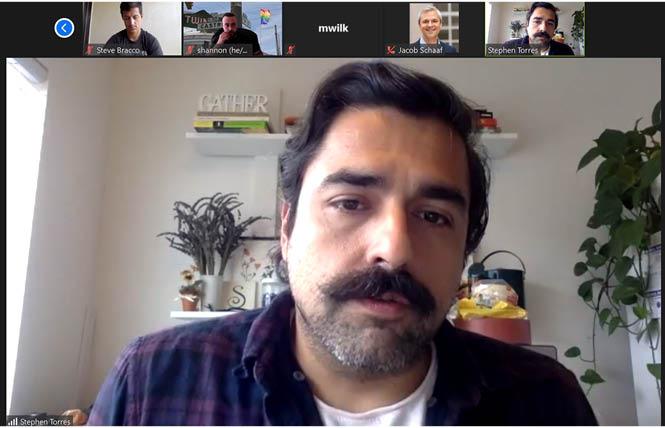 In light of vocal opposition to a proposed plan to install security cameras throughout the business district in San Francisco's LGBTQ Castro neighborhood, the group entertaining the idea is hitting the pause button for now.

Rather than move forward with instituting the safety initiative, the Castro/Upper Market Community Benefit District will instead launch an online survey to gather public feedback and host a Zoom "town hall/listening session" about the proposal, its executive director told the Bay Area Reporter in a phone interview Thursday, October 22.

"I don't know the dates yet," said Andrea Aiello, a lesbian, as for when the virtual meeting would be held.

The decision came after a second local organization raised serious questions about having cameras positioned throughout the Castro. The Castro LGBTQ Cultural District advisory board issued a statement Thursday voicing its "grave concern" about the plan.

Stephen Torres, who sits on the cultural district board, read a statement regarding the cameras that the advisory body had approved just before this morning's meeting of the CBD services committee.

"The community elected advisory board of the San Francisco Castro LGBTQ Cultural District would like to express its grave concern over the proposal being considered by the Castro Community Benefit District, as put forth by the vendor Applied Video Solutions to implement a privately-funded video surveillance system in the CBD footprint which includes the Castro, Eureka Valley, and Upper Market neighborhoods and closely mirrors that of the cultural district," the statement, which was provided to the media at the start of the meeting, partly reads.

"Furthermore, the City and the Union Square BID are already facing a lawsuit brought forth by the American Civil Liberties Union and activist Hope Williams who sits on our allied organization, the Harvey Milk LGBTQ Democratic Club for improperly sharing surveillance footage from a Black Lives Matter protest with the San Francisco Police Department," the cultural district statement noted. "District 3 Supervisor Aaron Peskin is working on legislation to curb abuses of these surveillance networks and to ensure that members of the public have an opportunity to weigh in before they are acquired in the first place."

Speaking on the other side of the issue was neighborhood resident Jacob Schaaf.

"I made it a point of being on this call today because of the fear I have walking our streets," Schaaf said. "I am here because of the conditions we have in our community. I know a number of folks are opposed to cameras but it is part of the process and I am here to voice my support for what we do going forward."

During its meeting Thursday morning, the CBD's services committee discussed what the goals and objectives should be of its public safety initiative. It didn't vote, however, on whether to approve or disapprove of the plan.

The overall plan comprises three ideas, including deploying public safety officers and ambassadors in the neighborhood, funded through the CBD's Castro Cares grant.

But it is the third part of the initiative — the consideration of a "security camera network" in the district — that has raised concern within the community.

As the B.A.R. reported earlier this month, the CBD board ended up postponing a vote on accepting money for the camera system after the progressive Milk club expressed its opposition to their installation ahead of the October 8 meeting.

At that point, Aiello and the CBD went back to the drawing board and discussed how to conduct research, define goals and objectives, and seek community and expert feedback before deciding on whether to go forward with the plan or not.

The camera proposal came about after an increase in crime in the neighborhood this year, Aiello told the B.A.R. two weeks ago. At that time she said that "residents in the Castro" on the neighborhood social media website Nextdoor were excited about a New York Times article that appeared in July about tech mogul Chris Larsen, who is paying CBDs to install cameras around San Francisco.

Larsen has not responded to requests for comment. According to Hoodline, Larsen has paid for over 1,000 cameras surveilling people in the Fisherman'' Wharf, Lower Polk, Mid-Market, Tenderloin, Union Square, and Japantown neighborhoods.

Improving public perception of safety
The beginning of the draft 'goals and objectives' for the CBD's safety initiative states that it is "to improve the perception of public safety in the Castro & Upper Market for all who frequent the district."

During this morning's meeting, Alan Lau, vice president of the CBD board, said, "I'm not sure if perception is the word. What we are saying is we are going to improve it."

Aiello told the B.A.R. after the meeting that the word perception would be changed in the final document.

In the "objectives" piece of the draft document, there are seven steps before "mak[ing a] decision on accepting [the] grant and installing [a] security camera network based on research and feedback from outreach strategies."

These are researching the grant opportunity, an "initial meeting with community leaders in the field to introduce the program and assess interest and any concerns," "collect policies from other CBDs in SF," "define Castro CBD's goals and objectives regarding a security camera network," "develop outreach strategies to solicit feedback from merchants, community members and property owners through an online survey and an online 'town hall,'" "get opinions of visitors and people from other parts of the city who frequent the Castro," and "issue RFP for installation and maintenance of camera system."

The RFP, or request for proposal, is key, Aiello told the B.A.R., as it can include specifications about who has access to the camera footage, what kind of access they have, and when.

"The RFP is how you can state what you want in the product you are buying," Aiello said, adding that it includes what picture resolution one wants from the cameras.

One potentiality could be to have the cameras blur everyone's face unless the administrators of a specific camera are served with a subpoena, Aiello said.

"Some of the concerns and what we want out of the system, if we go forward, can be specified in the proposal to the vendors," Aiello said. "The technology is so advanced at this point that you can do a lot of different things to address a lot of different concerns. I do believe a lot of concerns can be addressed through the policy development process and through the RFP."

The cameras would not be a "daisy chain" of cameras, and each camera would only be accessed at its location, Aiello said, adding that this may make "network" the wrong word to describe what is being proposed.

The CBD executive committee will next meet virtually at 9 a.m. November 3. Interested individuals can join that meeting here.