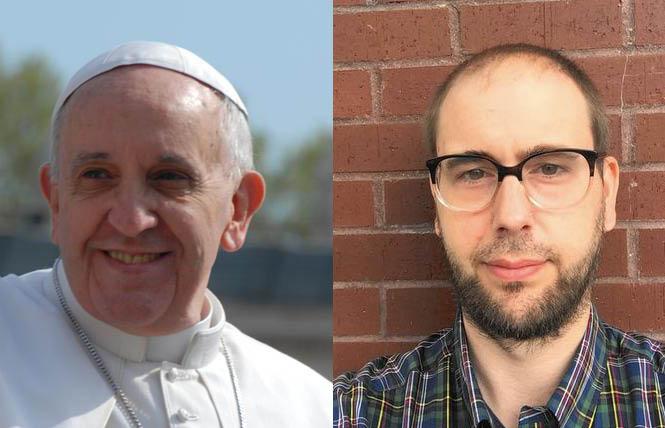 As Pope Francis this week indicated he's OK with same-sex civil unions, a gay man who aspired to be a Roman Catholic priest but who left the church in protest of firings of LGBTQ people from its institutions spoke out about the church.

The pope made the comments in a new documentary that premiered this week.

Published this summer, "A Catechism of the Heart: A Jesuit Missioned to the Laity" was written by Queens, New York-based Benjamin Brenkert, 40, whose departure from the Jesuit order was accompanied by an open letter to Pope Francis.

"I left the Jesuits after the firing of LGBTQ workers and employees at parishes and high schools," Brenkert told the Bay Area Reporter October 15. "When I say I left the Jesuits, I want to underscore that I felt the church left me no option."

The Catholic Church officially teaches that both homosexuality and gender-affirming surgeries are sinful and that LGBTQ people should remain celibate.

But Brenkert said that 15 years ago, when he first entered the Jesuit seminary, he was told he could be openly gay. He had chosen the order over becoming a Dominican or diocesan priest due to its more liberal attitudes.

"They had told me I could be open," Brenkert said.

The Jesuit order did not respond to a request for comment.

Brenkert soldiered on, eventually leaving the seminary in 2014, two years before ordination. He said during that time he encountered a lot of gay and questioning people.

"Certainly the hope was that people had — as healthy as possible — been there [in the seminary] with a full understanding of who they were, whether they were gay or straight. Suddenly that was not the case with everyone I met," Brenkert explained. "For those people really struggling, there were times they hurt themselves or others with their decisions, just like anyone who would do something destructive because they haven't fully figured out who they were."

Nonetheless, the seminarians who were not straight formed something of a "camaraderie" within the seminary world, because they could be more openly themselves without fear of being judged around one another, Brenkert said.

"There's an extent you can find common ground with straight peers but you know you can't be fully yourself," Brenkert said. "To be a gay person, you have to be around other gay people."

Brenkert said that some people chose the priestly life because "for my generation of gay people — our communities weren't so affirming, and the gay world was ruthless."

But Brenkert grew increasingly disillusioned with the hypocrisy and hostility toward LGBTQ rights from the church — even as Pope Francis, who was elected in 2013, made headlines for surprising statements that seemed to support LGBTQ Catholics.

Brenkert said that Francis' famous 2013 remarks asking "who am I to judge?" were "overblown and over-characterized" in the press.

"All of the stuff of 'who am I to judge?' was only about closeted gay priests and it's only about the 'G,'" Brenkert said, referring to the G initial of the LGBTQ acronym.

Further, Brenkert said that Francis' approach, which he characterized as more pastoral than doctrinal, is dishonest because the church still officially teaches that homosexuality is sinful.

"I would say you have the Pope Francis effect, and then you have someone like Amy Coney Barrett," Brenkert said, referring to President Donald Trump's appointment to the United States Supreme Court, who is a conservative Catholic. "It's an interesting time. You have Pope Francis with his most recent encyclical talking about equality, the environment, 'gay children are a blessing,' and you wonder 'why do you even have to say that?'

"In 2020, you have a papacy that was touted as change for the LGBT community — with everything [the Rev.] James Martin is trying to do — and on the other end you have Amy Coney Barrett's style, which is the most authentic style because she's telling you exactly what she believes and not being pastoral, because at the end of the day, if it's 'intrinsically disordered,' isn't that something you'd want people to know?" he added.

Martin, an American priest, is a consultant on the Roman Dicastery for Communication, which advises Francis. As the B.A.R. previously reported, he prayed for "the LGBT teen who is bullied."

Martin told the B.A.R. that Brenkert was right that the "who am I to judge?" statement was only about gay priests.

Pope's support for civil unions
When asked if Barrett's style is more authentic, and if Francis' words are strictly pastoral, Martin touted Francis' statement supporting same-sex civil unions, which was first included in a documentary that premiered October 21. (Francis has spoken against same-sex marriage on many occasions in the past.)

"Well, I would say look what he just did today in supporting same-sex civil unions," Martin wrote October 21, the day the pope's statement went public. "He hasn't changed doctrine but he has certainly changed the tone of the conversation, and that is a substantial change."

Dignity USA, a group for LGBTQ-supportive Catholics, stated in a news release October 21 that it is "cautiously optimistic about this development" regarding civil unions.

"If true, the pope's comments could represent an international game-changer and a major step forward for LGBTQI equality," Marianne Duddy-Burke, the executive director of DignityUSA, stated. "It would remove a key obstacle to LGBTQI inclusion in many places around the world, especially in areas where LGBTQI people are especially vulnerable to discrimination and violence. Civil unions laws can provide essential legal protections to LGBTQI couples and their children. ...

When reached for comment October 21, Brenkert said that "comments made to the director of a movie are not church doctrine."

"From the reports I see this was a private comment made to the director of a documentary," Brenkert said. "The pope is known for making these comments but they do not change doctrine. Why is the pope saying it's OK to be recognized by the state with civil unions and not by the church itself? If the church is talking about the eternal redemption of souls, and the love of God, the first step is to be recognized by the state? Why can't the church have gay marriage? And why is he punting to the state, especially considering with Amy Coney Barrett most likely going to the U.S. Supreme Court, which will be the end of same-sex marriage. ...

"He's not saying gay people aren't 'intrinsically disordered.' He's not saying closeted priests can come out. News people are just not discerning just what this guy is saying and where he says it," he added.

Barrett stated in her Senate Judiciary Committee hearing earlier this month that it's unlikely a same-sex marriage case would make its way to the high court.

Committee Chair Senator Lindsey Graham (R-South Carolina) asked Barrett what would happen if some state "tried to outlaw same-sex marriage" now. She said that, if a case challenged Obergefell v. Hodges, the 2015 decision that legalized same-sex marriage in the U.S., it would have to go through the lower courts first.

Papacy a 'failure'
In summation, Brenkert said that Francis' papacy is "a failure."

"Instead of the environment, he could have said 'let's talk about the contributions of LGBTQ people in the Catholic Church: gay men who sing in the choir, lesbians who teach in schools,'" Brenkert said.

Brenkert wrote in his open letter to Francis that "the last straw for me was when a married lesbian social justice minister was fired from a Jesuit parish in Kansas City." He subsequently left the Catholic Church entirely.

He was referring to the case of Colleen Simon, who was fired in 2014.
"The hope is someday, when possible, I will revisit my vocation and I will pursue the priesthood in the Episcopal Church," Brenkert said. The Episcopal Church accepts both same-sex marriage and LGBT clergy.

Brenkert said he hopes his book will serve as help to anyone on their life journeys.

"This is very relevant for people who want to know about coming out stories and meeting guys in the 90s and 2000s, whether they have faith or no faith at all to discern," Brenkert said. "The book is a journey book and provides an opportunity to go on a pilgrimage. ... It asks, is the place I'm at allowing me to flourish, as part of a community? My book offers people the opportunity to see someone taking a journey and asking — like a marriage — is this working out for me? Can I step away? For me, the answer is yes." 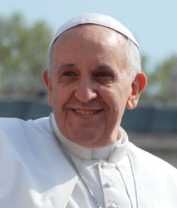 Pope changes tone in remarks on gays
Sign up!