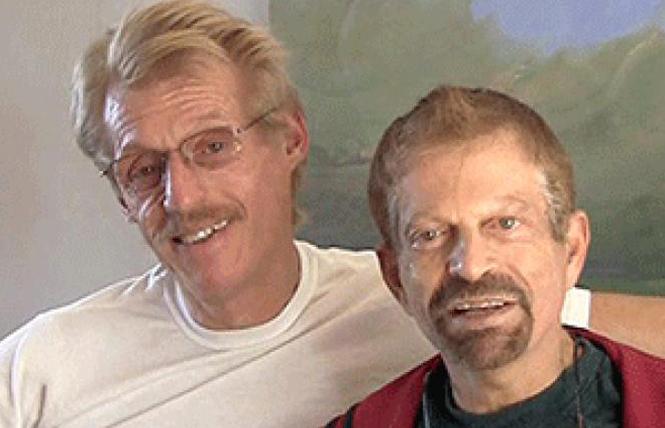 Tom Taylor, who was the keeper of the key to the rainbow flagpole at Castro and Market streets, and, with his husband, was known for elaborate Christmas light displays at their San Francisco home, died October 20. He was 77.

Mr. Taylor was born on September 8, 1943 in Richmond, California. He died at his home Tuesday morning, according to his sister, Barbara Taylor Andreozzi.

Mr. Taylor is survived by his husband, Dr. Jerome "Jerry" Goldstein. The couple had been together since 1973. As the Bay Area Reporter previously reported, comedian Bruce Vilanch quipped at their wedding that their love is "the oldest standing structure in San Francisco Bay." The couple are long-term survivors of HIV who were told in 1983 to prepare for death.

That wedding, held in October 2013, was a block party affair at the site of their 21st Street home in Dolores Heights and was officiated by rainbow flag co-creator Gilbert Baker and Dr. Robert Akeley, a founder of Bay Area Physicians for Human Rights.

It was important for the couple to have a public ceremony "in the street where the SFPD stopped Tom Taylor and almost arrested him in 1976 because he allegedly had no right to live with me," Goldstein told the B.A.R. at the time.

Also at their home, the couple became known for their detailed holiday decorations, which the B.A.R. reported in 2014 were "a winter wonderland with wrapped boxes, stuffed animals, and glittering lights, while a 65 foot tall lighted Norfolk Island pine tree is the centerpiece."

The couple first bought the tree in 1988, Goldstein told the B.A.R. As the tree grew, the couple got more and larger decorations to make it look to scale.

Terry Asten Bennett of Cliff's Variety on Castro Street bid farewell to Mr. Taylor in a Facebook post late October 20, explaining what he did for the flag.

"Rest in peace Tom Taylor. We are so grateful for everything you have done for our community. Tom quietly cared for the flag pole and Rainbow Flag," Asten Bennett wrote. "He stored and modified the giant flags to make sure the flapping wouldn't keep the neighborhood awake at night. He and his husband Jerry spent thousands of dollars and jumped through city bureaucracy to make sure the flag stayed lit at night. Every year he would transform the scrawny tree in front of their 21st Street home into a Christmas fantasy. You brought so much joy to our community, Thank you. You will be forever missed."

Longtime gay activist Cleve Jones shared his thoughts in an October 21 phone interview. He said he was "very sad."

"He was a remarkable man: very funny and full of life," Jones said. "He was one of the hardest working people I've met in my life," adding that Mr. Taylor and Goldstein helped many people and organizations in the Castro without seeking recognition for themselves.

Jones said he'd met Mr. Taylor and Goldstein through Baker, "though I can't recall the year or the circumstances."

"Taylor was always so involved with Gilbert," Jones said. "The flag is an example of how people see something, take it for granted, and have no fucking clue how much work goes into it. He was on call 24/7."

The Diversity Foundation, which the couple co-founded, took care of the flag, obtained new lighting for it, and even took care of the hats of the San Francisco Lesbian/Gay Freedom Band. Mr. Taylor retained custody of the key to the flagpole, which prevented unauthorized actions to the flag, such as lowering it or changing it.

In 2015, Mr. Taylor and Goldstein were honored as recipients of the San Francisco LGBT Pride Celebration Committee board's Heritage of Pride, 10 Years of Service Award.

The couple began their political activism in the 1970s, Goldstein said at the time, protesting against Anita Bryant's homophobic campaign and the Briggs Initiative, a 1978 California ballot measure that was defeated but which would have banned gays, lesbians and their supporters from teaching in public schools.

Gay state Senator Scott Wiener (D-San Francisco), then the District 8 supervisor, attended the couple's wedding. At the time he called the couple "truly Castro royalty." He praised Mr. Taylor in a statement to the B.A.R. early October 21.

"Tom Taylor was one of the engines that made the Castro run," Wiener said. "For decades, Tom cared for and uplifted our neighborhood. His death is a terrible loss for our community. Tom was a kind, selfless, generous human being who was always there for the rest of us. Rest in power, Tom."

At their wedding, the couple spoke of their wish to be cremated when the time comes, with their ashes placed together in a single urn at the San Francisco Columbarium.

After the initial publication of this story, Castro Merchants board President Masood Samereie told the B.A.R. that a memorial is being planned for Mr. Taylor though the exact date and time have not yet been decided.

Samereie added that Castro Merchants "is working with Tom's personal assistant to keep the flag going forward as he would have wished. Tom had a key, I have a key, and the personal assistant has a key." The three of them have been taking care of the flag "for the last few years," he said.

The Merchants has one unused flag in storage and three on the way, Samereie added.

Updated, 10/21/20: This article has been updated with comments from Cleve Jones.

Updated, 10/23/20: This article has been updated with additional details from Mr. Taylor's sister.

Updated, 10/27/20: This article has been updated with comments from the Castro Merchants board president.

Updated, 11/3/20: This article has been updated with a list of Mr. Taylor's survivors. 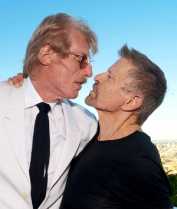 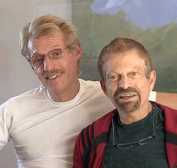 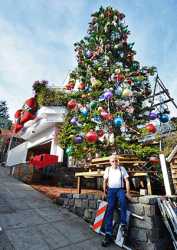