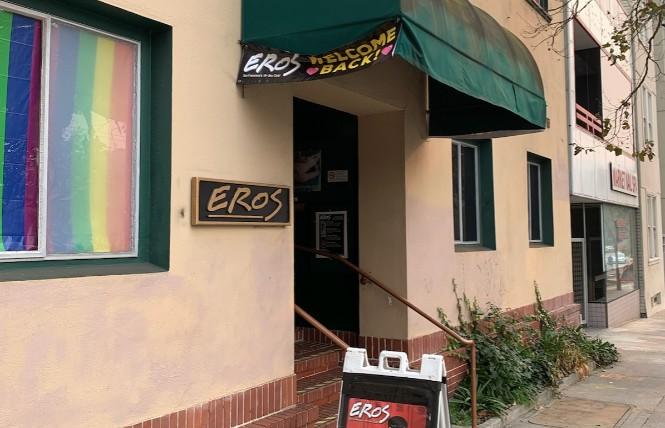 Closed since March due to the coronavirus pandemic, gay sex venue Eros on upper Market Street in San Francisco's Castro neighborhood has re-opened as a "jack-off club," its co-owner told the Bay Area Reporter.

For the time being, patrons are not allowed to physically interact with each other because of the health crisis, noted Ken Rowe in a phone interview October 14.

"We have no steamroom, shower, sauna or locker rooms," said Rowe. "Everyone has to wear masks and stay six feet apart. You're not allowed to touch."

As the B.A.R. previously reported, Eros had closed March 16 due to the COVID-19 shelter-in-place orders. As restrictions for massage studios and gyms eased last month, the club decided to reopen following the rules as applicable to those types of venues, Rowe said.

It has been open to customers since September 24. Rowe said he has not been in touch with anyone specific at the city's health department regarding the club's operations.

According to its website, there are temperature checks required upon entering and updated cleaning protocols every hour. Plexiglass has been installed at the front desk, Rowe said.

There is a limit of a dozen visitors at a time, though the sex club has not seen that many since re-opening, Rowe told the B.A.R.

Eros is open every day, noon to 9 p.m. It will continue to move forward depending on government regulations. Across the Bay, in Berkeley, Steamworks Baths is still closed due to the pandemic, according to its website.

The COVID-19 pandemic has been devastating to gay America's bathhouses and sex clubs, echoing the steep decline in business and government closure orders they saw during the beginnings of the AIDS epidemic forty years ago. As the B.A.R. previously reported , San Jose's Watergarden — which survived the AIDS epidemic — announced in July it was shutting its doors for good. Very shortly afterward the South of Market sex club BlowBuddies announced it, too, was shuttering.

The same month, the San Francisco Board of Supervisors passed legislation that effectively re-legalizes bathhouses in city limits (which are legally distinguishable from sex clubs) after 36 years of restrictions imposed in an attempt to prevent the spread of HIV. The Department of Public Health has until January 1 to update the city's health codes regarding adult sex venues so that the establishments are no longer restricted from having private rooms with locked doors for rent and need to police the sex their patrons engage in.

Eros, which opened in 1992, has set up a GoFundMe page to help it survive the COVID-19 era, as so many other businesses have since shutdown orders were imposed in March. To date, it has raised $5,270 of its $30,000 goal.

"People are happy we are open but they're also too timid to go out-and-about," Rowe said.

SF poised to allow gay bathhouses to return
Sign up!