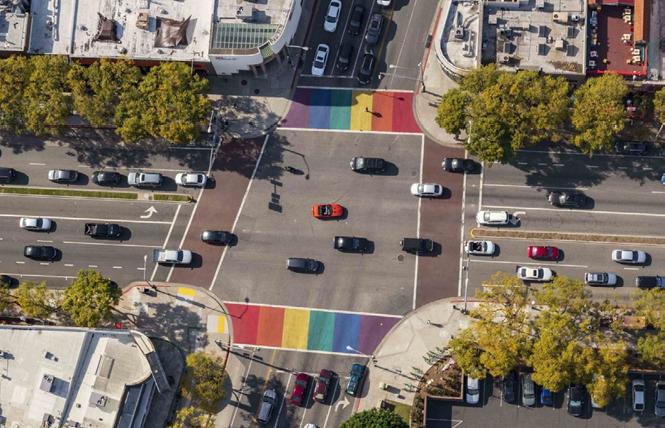 The Southern California LGBTQ enclave of West Hollywood is poised to become the first city in the country to create a drag laureate position.

If it does, it will beat San Francisco in establishing a post that LGBTQ community leaders in the Northern California city had first proposed two years ago. And WeHo officials readily acknowledge they got the "innovative programming" idea from their municipal counterparts.

The West Hollywood City Council was to vote on the proposal and instruct city staff to develop a drag laureate program October 5. But due to technical difficulties it had to cancel its virtual meeting that evening and will now take up the item when it meets next Monday, October 19. Gay City Councilman John Duran, who is seeking reelection this November, and Councilwoman Lauren Meister are co-sponsoring the idea.

They envision a drag laureate serving not only as an ambassador to West Hollywood businesses, particularly those located in the city's historic LGBTQ district, but also as a promoter of the local arts and cultural scene. Should the five-member council adopt the idea then city staff would be tasked with defining the scope of the program, creating guidelines for the position, and outlining a selection process that the council members would need to adopt.

A constituent had flagged the idea for Meister who then approached Duran about moving forward with it. They both told the Bay Area Reporter they expect it to be approved next week and are eager to see the position be filled in early 2021.

"When I read more about it, I thought this was a great thing to do," said Meister, a straight ally. "Right now, what we need to be doing is supporting our local businesses, our small businesses, our legacy businesses and our LGBT businesses more than ever."

Duran noted that the city's LGBTQ district along Santa Monica Boulevard, unofficially called "Historic Boystown" by some, had already been struggling like other such gayborhoods across the country as younger people in the community no longer felt the need to self-segregate in "gay ghettos." LGBTQ nightlife establishments have also had to compete with online and app-based social networking sites and apps, leading many bars and clubs to close in recent years.

Then came the novel coronavirus outbreak early this year, which has further strained businesses in the city's LGBTQ district, Duran noted. It has also deprived drag performers of the spaces where they had worked, with some being able to use virtual platforms for the time being to host shows and earn revenue through texted tips from the online audience.

"Our LGBT district is under threat and under threat from a whole lot of different issues. The most prominent now is COVID-19," Duran said, later adding, "the necessity for gay ghettos is not as critical as it was when we were creating West Hollywood, the Castro, and the West Village as sanctuaries for survival."

A staff report to the WeHo council refers to the drag laureate as being an honorary position with no current fiscal impact that members of the city's LGBTQ community would help select. Advice would be sought from both the West Hollywood Chamber of Commerce and the Los Angeles LGBTQ Chamber of Commerce on how such a position could assist their members.

Duran told the B.A.R. there likely would be some cost, less than $10,000 he estimated, to hold a competition to crown a drag laureate. Whether the city or a civic group would pay for it, or share in the costs, is something he expects city staff will address when they return to the council with a plan for launching the program.

One thing he was certain of is that the City Council should not be the one to determine who is selected as the drag laureate.

"It should be people immersed in drag culture and the bar scene," he said.

"I don't see it being a costly process," she said. "This is something that helps to promote not only the bars and the clubs but also to help promote the drag queens. I think that will be the most important part of it."

With many of the city's bars and restaurants, including LGBT legacy businesses, severely impacted by the health pandemic, the staff report notes that a drag laureate could assist such establishments recover next year.

"In light of the COVID-19 public health emergency and the resulting economic shutdown, most businesses in West Hollywood, including the legacy businesses, have been forced to close, reduce service, or change their normal operations," notes the staff report. "It is unclear how long the health orders will continue in one way or another and how great the economic ramifications of this public health emergency will be in the long-term. The Drag Laureate program will be one of many tools to promote West Hollywood businesses and help the community in its recovery."

And the local drag scene will also have an important part to play, notes the staff report, as it has been an important economic driver in the city.

"West Hollywood has been one of the centers of drag culture for decades," states the report. "Drag performers are often the main attraction at restaurants and bars, star in arts and cultural events, or even lead storytelling and crafts at Drag Queen Story Hour."

SF effort
As the B.A.R. noted in August, establishing a citywide ambassador of drag similar to a poet laureate is among the nearly 50 suggestions included in San Francisco's groundbreaking LGBTQ+ Cultural Heritage Strategy. The document, a draft version of which was first released in 2018, aims to provide city leaders myriad ideas for preserving and strengthening San Francisco's LGBTQ community.

WeHo officials zeroed in on the drag laureate idea as one of more "innovative programming recommendations" in the strategy.

It had been expected that San Francisco would have officially adopted the strategy by now, but the approval process was interrupted by the health crisis. And it has taken an extended period of time to have various city departments weigh in on the strategy and for staff to determine the estimated cost to implement each idea listed in the 56-page document.

It would likely cost the city anywhere from $10.2 to $15.7 million, with the price tag to pay for the top 10 prioritized steps ranging from $1.3 to $2 million. A hearing date before either the city's planning commission or Board of Supervisors to review and vote on the strategy has yet to be announced.

"Nothing has been scheduled at the moment. We're still waiting guidance from the commissions and BOS about scheduling any hearings or briefings on the strategy," Candace SooHoo, deputy communications manager for the planning department, told the B.A.R. October 7.

While the idea for creating both a city drag laureate and a city trans laureate had been listed in small type in a chart in the earlier version of the strategy released in 2018, the revised document now highlights the drag laureate concept in the "Culture" section.

A spokesman for Mayor London Breed did not respond to the B.A.R.'s query in August if she would name such an individual in 2021. Mayoral adviser Clair Farley, a transgender woman who is director of the city's Office of Transgender Initiatives, told the B.A.R. that she loved "the idea of lifting up leadership of the city with a drag laureate."

Gay District 8 Supervisor Rafael Mandelman, the lone LGBTQ community member on the board, also enthusiastically supported the idea when asked about it by the B.A.R.

Asked by the B.A.R. last week about the possibility of seeing West Hollywood beat San Francisco to the punch in having the nation's first official drag laureate, Mandelman didn't express any concern about the prospect.

"I think it would be an amazing thing for every city to have a drag laureate," he said. "If it is an idea that spreads around the country and around the world, so much the better."

Neither Duran nor Meister realized San Francisco has yet to establish a drag laureate program. They were a bit nonplussed when being told that by the B.A.R.

"That would be something! What happened, San Francisco?" asked Meister. "Governments move very slowly, I will tell you that."

"Wow! That is interesting," responded Duran. "We are copying it from you all! I thought San Francisco already had a program in place."