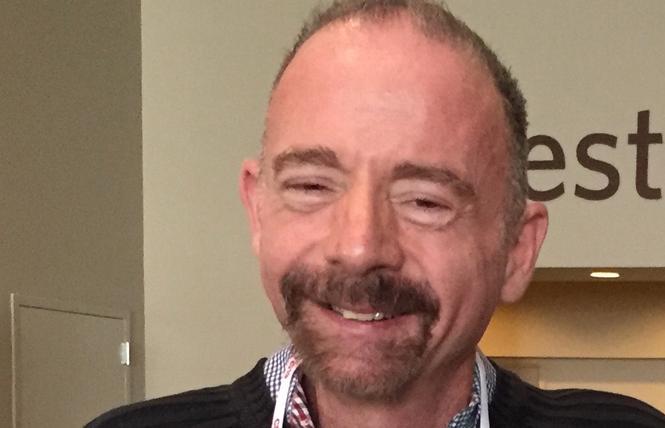 Timothy Ray Brown, the first person cured of HIV, died September 29 at his home in Palm Springs, surrounded by his partner and friends, after battling a recurrence of leukemia. He was 54.

Since he revealed his identity as the Berlin Patient a decade ago, Mr. Brown has been a tireless advocate for HIV cure research, submitting to countless tests, speaking at AIDS conferences, and being interviewed by journalists worldwide.

"Timothy committed his life's work to telling his story about his HIV cure and became an ambassador of hope," Mr. Brown's partner, Tim Hoeffgen, wrote in a Facebook post announcing his death.

In 2006, Mr. Brown was living in Berlin and had well-controlled HIV when he was diagnosed with leukemia, which would ultimately require two bone marrow transplants. His German physician, Dr. Gero Huetter, had the idea to use stem cells from a donor with a rare genetic mutation that blocks HIV from entering cells. He underwent intensive chemotherapy and radiation — nearly dying in the process — and the donor stem cells rebuilt a new immune system that was resistant to the virus.

Mr. Brown willingly became a guinea pig, undergoing extensive testing to help researchers learn more about how his HIV was eliminated. Scientists searched for residual virus in his blood, gut tissue, and everywhere else they could manage to look, but they were not able to detect intact HIV anywhere in his body.

Bone marrow transplants are too risky to use as a routine cure approach for HIV-positive people who don't need them to treat life-threatening cancer, but Mr. Brown's case inspired researchers to find other ways to make immune cells resistant to HIV or enable the immune system to control the virus.

"Timothy Brown cut the Gordian knot in terms of HIV elimination and a cure," Huetter told the Bay Area Reporter in an email. "Timothy is still the inspiration for any HIV-related [cure] research and this will last until the day a cure for HIV has been found."

Last fall, Mr. Brown began to experience pain and neurological symptoms, and tests early this year revealed that his cancer had relapsed, Hoeffgen told the B.A.R. in August.

At the height of the COVID-19 crisis, Mr. Brown underwent chemotherapy and radiation, but the treatment was not effective and the side effects proved intolerable. This summer, he decided to stop treatment and entered home hospice care, where he received many visits from loved ones, AIDS advocates, and HIV researchers.

Mr. Brown was born on March 11, 1966, and grew up in Seattle, according to Hoeffgen's Facebook post. An avid traveler, Mr. Brown lived in Berlin from the early 1990s to 2010, where he worked in a cafe and was a German-English translator.

After Mr. Brown's bone marrow transplants led to sustained HIV remission, his case was described in a poster at a scientific conference in 2008 and was written up in medical journals — referring to him only as the Berlin Patient — but received little attention outside the field.

After moving back to the United States, Mr. Brown went public for a cover story in Poz magazine in June 2011. Since then, he has continued to undergo testing for HIV, including at UCSF when he lived in San Francisco. At the time of his death, Mr. Brown had been free of HIV for 13 years.

One of the doctors who Mr. Brown worked with mourned his passing.

"Timothy was a true hero," HIV cure researcher Dr. Steven Deeks of UCSF and Zuckerberg San Francisco General Hospital, wrote in an email to the B.A.R. "He gave up his time and went through countless invasive procedures to help advance the cause. He rarely asked for anything in return. He always made me smile and seemed to have that affect on everyone in the business."

Mr. Brown and Hoeffgen met in 2013, when both men were living in Henderson, Nevada. The couple moved to Palm Springs in January 2015.

As he had long wished, Mr. Brown finally had the opportunity to speak with another person widely regarded as cured of HIV, Adam Castillejo of London. Like Brown, Castillejo also underwent a bone marrow transplant for cancer treatment using stem cells with the protective mutation; his case was first presented at a scientific conference in 2019.

Even during his last weeks, Mr. Brown maintained his message of hope. When asked what final message Mr. Brown wished to convey, Hoeffgen told Mark S. King, who broke the news of Brown's illness in his My Fabulous Disease blog, "He said, 'Tell people to keep fighting. Fight for a cure for HIV that works for everyone. I never wanted to be the only one.'"

Doc believes 2nd woman may be naturally cured of HIV
Sign up!