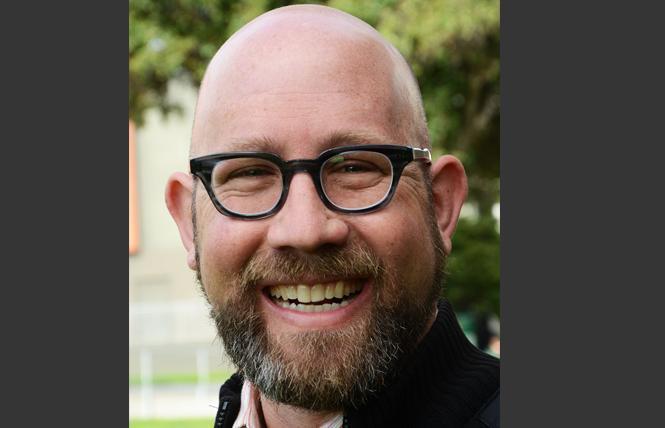 District 8 Supervisor Rafael Mandelman has been able to secure additional funding for several LGBTQ-related programs through the Board of Supervisors add-back process for the city's two-year budget. Photo: Rick Gerharter

Additional funding for Lyon-Martin Health Services; HIV and trans housing subsidies; and initiatives relating to homelessness has been added to the mayor's two-year budget as part of the Board of Supervisors add-back process through the office of gay District 8 Supervisor Rafael Mandelman.

After Mayor London Breed made her balanced budget proposal for Fiscal Years 2020-21 and 2021-22 in late July, supervisors craft a spending plan that includes their amendments, or add-backs, before the new budget goes before the full board. The supervisors finished their budget work in late August. A board vote is expected at the end of September.

Mandelman's office oversees add-backs relating not only to District 8, but to LGBTQ issues generally, according to aide Tom Temprano, since Mandelman is the only queer person on the board.

"This is an incredibly challenging time for people throughout San Francisco and the world," Mandelman told the B.A.R. September 1. "In our budget, we felt the need to protect the most vulnerable, especially at a time when people are facing challenges in health care."

City funding for Lyon-Martin
As the B.A.R. previously reported, Lyon-Martin's parent organization, HealthRIGHT 360, announced earlier this year it would have to cut back on the number of people served by the clinic because it has generated significant financial losses. Lyon-Martin primarily serves low-income trans women.

In April, Mandelman secured a deal to provide city funding to keep Lyon-Martin open at its present location. Now, an add-back would provide $1.2 million for Lyon-Martin this budget year and another in the next.

"The Lyon-Martin investment is especially important to me because it is such an integral institution for our community," Mandelman said. "There have been many threats to its survival for many years but it has always survived. It's good to see the Board of Supervisors step in with additional funding to make sure Lyon Martin can continue providing services."

"This is one of my favorite things about this job and kind of what I enjoy most, honestly," Temprano told the B.A.R. August 28. "This is the stuff where it's like 'Oh my God — we got millions of dollars for Lyon-Martin.' That's really cool."

Lauren Kahn, the vice president of communications for HealthRIGHT 360, told the B.A.R. that Mandelman's support is "very consistent with who he is, in a good way."

"Supervisor Mandelman has been extremely supportive of us and we are super, super grateful," Kahn said. "We are always grateful when people go out of their way to make sure our folks are cared for."

Trans and HIV housing subsidies
As the B.A.R. reported just two weeks ago, Breed's announced balanced budget includes $2 million annually each for Our Trans Home SF and the HIV/AIDS rent subsidy program for the next two years.

The add-backs would expand the funding for both dramatically — each would receive an extra $450,000 this budget year and an extra $600,000 next budget year.

"The need is so great and we see it on our streets with so many people who are trans or living with HIV out there and they don't get the prioritization they need," Mandelman said. "The best way to prevent homelessness is to keep people living where they are housed."

Clair Farley, a trans woman who is the director of the Office of Transgender Initiatives, stated that the trans advisory committee "met virtually with members of the Board of Supervisors at the end of July for our annual Trans Advocacy Week, sharing their stories of the impact of COVID and community recommendations."

"We are grateful for the leadership of Supervisor Mandelman and Mayor London Breed for continuing to support critical and life saving services," Farley stated in a September 1 email to the B.A.R. "During this extremely difficult time, our community organizations have been at the forefront of COVID relief including our trans and LGBTQ programs, who tend to be the only safe and accessible resources for our community.

"We continue to see how the pandemic and the economic downturn is disproportionately impacting our Black and Latinx trans and queer communities," she added. "It is critical that we do everything we can to get and keep our most vulnerable communities housed, and assure that there is access to inclusive healthcare, and essential services."

Q Foundation did not respond to a request for comment.

With this funding, the shelter will be able to expand by 28 beds, according to Temprano.

"We know how many queer people in particular don't feel safe in traditional shelters," Mandelman said. "That's a need that's been identified over and over again. We've been able to provide 28 additional beds, which certainly doesn't meet the need but is a step in the right direction."

Dolores Street Community Services did not respond to a request for comment.

As the B.A.R. previously reported, Mandelman has been publicly stating the need for more city response to the mental health crises of unhoused individuals for some time. Another budget add-back would provide funding for two more crisis response teams consisting each of "a fire department paramedic, a clinician with the department of public health and a peer," Mandelman said.

The add-back would bring the total number of such response teams from four to six.

Street crisis response teams were also a top recommendation of the methamphetamine task force last year, on which Mandelman served.

"It is possible we can redirect 21,000 calls answered by SFPD last year to mobilized crisis teams and so I pushed — and supervisors [Hillary] Ronen and [Matt] Haney pushed — to expand it to six by end of year."

The expansion will cost "a few million dollars," Mandelman said.

Castro neighborhood add-backs
Lavender Youth Recreation and Information Center will be receiving $200,000 for its capital planning project. Of that, $25,000 is in the form of an add-back, and the balance was secured from the mayor's office, according to Temprano.

"LYRIC is an anchor, they are embarking on a capital planning process, and so we included $200,000 for them," Mandelman said. "They need a lot and this is a modest city contribution to that effort, which is for more than $200,000."

LYRIC's total capital renovation program is $2 million, according to Jodi Schwartz, the agency's executive director, in a September 2 email to the B.A.R.

"We are getting close to meeting the halfway point of that goal," Schwartz stated in the email, which began with thanks to Mandelman. "While the key leaders in the city have indicated a strong desire to support the construction phase of LYRIC's project, specific funds have not yet been specifically identified. LYRIC will continue our conversation with the mayor's office and other key city leaders to ensure that LYRIC's primarily low-income LGBTQQ+ youth of color are prioritized and that they will have a safe space to come back together to connect and heal post pandemic. We are calling on our community to stand with LYRIC and invest in this critical project."

"These are non-police, non-security folks out on the street who provide assistance for people who need assistance," Mandelman said.

Union Square and Rincon Hill are the only San Francisco neighborhoods to currently have community ambassadors.

Finally, $60,000 will be spent on "technical assistance, community ambassadors and infrastructure for D8 shared spaces," referring to the street closures to accommodate diners due to the COVID-19 pandemic, such as on 18th Street in the Castro.

"The labor is being staffed entirely by volunteers," Mandelman said. "So we put some money for that."

One is $25,000 to support "Black Indigenous People of Color programming and work in the Castro." As the B.A.R. previously reported, this summer's mass protests against racism and police violence have shined a new light on racism in the LGBTQ community.

"We're just at the starting place where we are having conversations about a town hall. We may do something with community small businesses and people of color on how to make the Castro a more welcoming community and encourage people to open up a business in the Castro," Mandelman said. "We put a little seed money in there for whatever efforts might come out of those conversations."