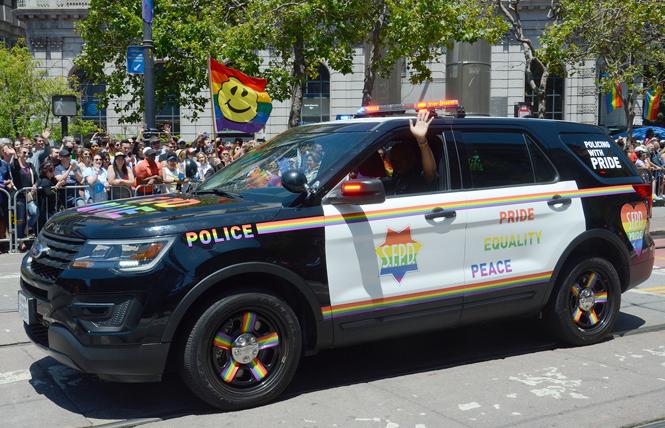 The Pride Alliance of the San Francisco Police Department has been banned from participating in the San Francisco LGBT Pride parade in uniform as a contingent next year, according to a Facebook statement Wednesday by SF Pride board President Carolyn Wysinger.

Wysinger's message, which was co-signed by SF Pride Executive Director Fred Lopez, stated that the organization has "concluded that in 2021 we cannot welcome the participation of the San Francisco Police Department's Pride Alliance — which is to say, uniformed SFPD officers marching as a Parade contingent."

The Pride leaders said the organization was "disappointed and frustrated" following a 2019 incident when police used force against anti-police and anti-corporate protesters who blocked the parade route for almost an hour.

As the Bay Area Reporter previously reported, one of those protesters, Taryn Saldivar, recently filed a federal lawsuit against the city and law enforcement officers for how they were treated by SFPD. Saldivar's attorney, EmilyRose Johns, did not respond to a request for comment from the B.A.R. for this story.

Officers will still be involved in the parade and festival for security purposes, as required by the city as part of its street permitting process. And Wysinger and Lopez's statement did not say anything about individual police officers marching in street clothes.

Notably, the statement does not rule out police marching without uniforms or in years post-2021.

In an emailed statement to the B.A.R. after this story was initially published, Police Chief William Scott said he was "disappointed" and touted his department's record on diversity and inclusion.

"Through our efforts in recruiting, community engagement, policy changes and inclusion, the San Francisco Police Department has become one of the most diverse law enforcement agencies in the country. We are indebted to the enormous volume of work by community members, city leaders and San Francisco Police Department LGBTQ and nonbinary officers, past and present, who are contributing to foster positive changes within law enforcement," Scott stated. "As the chief of police, I am disappointed in the Pride board's decision to exclude uniformed SFPD officers from participating in the 2021 Pride parade.

"I believe it is important for our members to participate in Pride Month activities so we can show firsthand that we are a diverse department, that we are proud of who we are and that we are willing to work closely with the LGBTQ community we serve," he added. "It's also important to show youth in the Bay Area and around the country that we are united as a community in inclusiveness, diversity and acceptance."

In her statement, Wysinger, a lesbian who is the president of the board of the San Francisco LGBT Pride Celebration Committee, said the decision comes in the wake of the Department of Police Accountability dismissing five counts of unnecessary force stemming from last year's parade incident.

SF Pride officials are apparently displeased with inaction by the city's Department of Police Accountability in the 2019 incident.

"While we appreciate the work of the Department of Police Accountability, we now see that it is limited in its capacity to effect change in a situation like this. Ever since that day, Pride has advocated that SFPD's charges against the protesters be dropped, sending letters to the court and stating our request at a press conference," the statement reads. "We acknowledge and appreciate the steps that the police have taken to heal decades of mistrust between the department and the city's LGBTQ+ communities.

"But SFPD's long-standing patterns of violence outweigh any rainbow-colored police cruisers or Pride patches, and it overshadows even Chief Scott's apology for the historical mistreatment of LGBTQ+ San Franciscans at Compton's Cafeteria and in numerous raids," the statement reads. "While welcome, such actions are merely symbolic unless accompanied by real change. Consequently, the board and staff have come to a decision about the involvement of uniformed law enforcement officers in the San Francisco Pride parade."

Paul Henderson, a gay man who is the executive director of the Department of Police Accountability, told the B.A.R. in a phone call September 3 that there was not much he could say for legal reasons, but clarified that the investigation dealt with five allegations but more than five officers. Four law enforcement officers had been named in the lawsuit against the city and county.

"I can't talk much about specific cases," he said. "What I can say is that the Pride organization contacted us and wanted to file a complaint. We can get complaints from individuals, from organizations; it's an open field.

"I think the real issue is 'what took so long?' All I can say is that there are a number of reasons why," Henderson explained. "In a case like this, with 40-60 body-worn cameras, that causes an inordinate delay because DPA is one of the only such agencies in the country without body-worn camera access. So each request has to go through the police department and it can take months."

Henderson said that while there "were no sustained allegations, there were policy recommendations made as a result of the investigation for concerns the organization had about procedures that were observed and investigated."

His office's dismissal of the allegations was within the past month, Henderson said.

Tony Montoya, a gay man who is head of the San Francisco Police Officers Association, called the decision "disheartening."

"We reject all forms of racism, bias, bigotry, prejudice, intolerance, and sexism that targets any San Franciscan, and we are disappointed that rather than entering into a dialogue with our police officers to bring us together, that the event sponsors would choose to ostracize us from the community we serve," Montoya stated in an email to the B.A.R. September 2. "It is the height of irony that our Pride parade would be used as a wedge instead of as an opportunity to work toward improving police and community outcomes. The fact that this organization would also discriminate against our LGBTQ police officers who want to build bridges to the LGBTQ community and SFPD, is completely disheartening."

The issue of police participation in the parade has become controversial in recent years. Earlier this year — before the resurgence of Black Lives Matter activism this summer — the board of directors for the Pride organization struck down an effort to ban Alameda County Sheriff's officers from the parade (though they were not included as a contingent in the first place).

The September 2 statement from Wysinger and Lopez goes on to say that while "'LGBTQ people' and 'police' are not mutually exclusive ... police presence does not allow for [Black transgender individual and group] participation in our events."

District 1 Supervisor Sandra Lee Fewer, who gave a certificate of honor from the Board of Supervisors to the Pride Alliance last year, defended giving that recognition in a phone interview after the initial publication of this story.

"I think that the reason I have the award is that the police department has been dominated by white heterosexual men since its inception. For folks to come out in the police department takes courage and camaraderie and I wanted to thank their courage for coming out in that culture. It didn't have to do with the police job so much specifically," Fewer told the B.A.R.

When asked if SF Pride should have banned the contingent, Fewer said, "I'll leave that to the organizers."

"But what I will say," Fewer added, "is that it's hard being rejected by your peeps. It's hard to come out in a culture like that and at this time what you need is support. Yeah, when you texted [about SF Pride banning the Pride Alliance] I said 'Oh' and felt bad for them and felt they've had a hard time within the context of that culture. ... SF Pride is such a moment of joyousness and camaraderie that to have that family reject you for your profession is a little sad. But SF Pride is its own organization."

In a text message to the B.A.R. after the initial publication of this story, Inn stated that the Pride organization is "FINALLY! 'LISTENING TO BLACK VOICES!'"

"It took them long enough," Inn wrote. "Carolyn [Wysinger] is trying to make it look like it's her idea and something new that they've come up with when many of us REAL activists, especially our BIPOC activists, have been saying this for many, many, many years. No police presence at PEOPLE'S MARCH 2020 was the answer to SF Pride's ignorance and their continuation of putting Black lives at harm.

"When I ran for the board and stepped down within two months of their nonsense, I ran on bringing back Black and Brown communities to San Francisco pride and have SFPD only be a traffic monitoring crew," Inn added. "San Francisco Pride board wanted nothing to do with that. So of course they are going to now! How would it look in the era of Black Lives Matter and all that's happening to Black lives at the hands of police that they continue to accept the entry fee of the SFPD? So if not now, when? SF Pride finally woke the fuck up!"

The decision comes after Pride organizers in San Diego in June decided not to allow law enforcement participation in San Diego Pride festivities going forward until a series of demands are met. The Pride committee also banned such groups from having booths at its festival.

"It can be traumatizing for folks to see people with guns and Tasers and batons march down a parade," San Diego Pride Executive Director Fernando Lopez told San Diego's ABC-TV affiliate in June. "Now, someone who's black can't take off their skin. A law enforcement officer can take off their uniform. They are a whole human being. If they want to take off their uniform and march with a peace flag or Latinx community ... If the police chief wants to not wear his uniform next to me next year, I'd be happy to have him walk next to me next year."