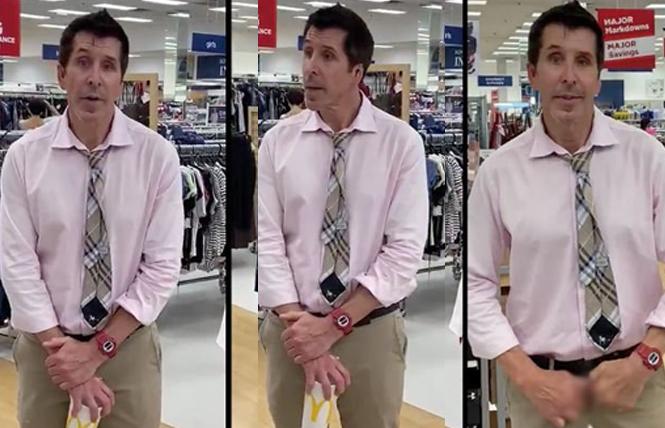 Tim Gaskin has been exonerated after a video of him at a South Bay Marshalls went viral last month. Photo: Courtesy Twitter

A gay man who became the unwitting star of a viral video last month before he was arrested for indecent exposure has been cleared of criminal wrongdoing, Campbell police told the Bay Area Reporter September 1.

Hayward resident Timothy Gaskin (who has legally changed his name to Arthur Master), 53, was placed under citizen's arrest by Anthony Zamora, 39, of Pacific Grove, at a Campbell Marshalls last month for allegedly indecently exposing himself.

However, when police reviewed closed circuit television from inside the Marshalls, they determined Zamora's claims to be "unfounded."

"The supposed victim was placed under arrest for filing a false police report," Captain Ian White, the public information officer for Campbell police, told the B.A.R. Zamora was cited and then released pending a court date.

Zamora was arrested August 25. Eight days earlier, on August 17, Gaskin was videotaped by Zamora telling Marshalls employees that he couldn't wear a mask because of an ear condition that prevents the mask string from going around his ear lobe. He used homophobic and racial language during the video, which prompted the online outcry that Gaskin was the equivalent of a "Karen," a pejorative term for an entitled, demanding or racist white woman.

But Gaskin told the B.A.R. September 1 that he was only repeating back the language used by an individual harassing him and his boyfriend in the store. It was that individual who Gaskin identified as the man taking the video.

"I've realized that people could be hurt by what they were watching and people have taken it in many different ways," Gaskin said. "I apologize for reacting like that if they saw it."

Gaskin said that the man who took the video had told people he wanted to make a "Karen" video and he feels he was targeted for his sexual orientation. He characterized the videographer's actions as a "hate crime."

"If you accuse a man who is gay of pulling out his penis, it must be true," Gaskin sardonically said. "I was unaware for 24 hours that this went viral and the calls I got were from personal family and friends who were convinced at what they saw. My godson called crying about my behavior."

Gaskin said he pulled his zipper up and down to demonstrate that it had been up when he was accused of it being down.

"The person who called my boyfriend and I 'faggots' said, 'You look like you need new clothes.' He said my zipper was down and he was making fun of my clothes," Gaskin said. "[The zipper] was up and I zipped it up and down to show him it was up."

Gaskin said individuals on the internet and social media have been demanding he be fired for his conduct in the viral video.

"When people say something went viral, you're never sure, but people stop me on the street now and it's humiliating," Gaskin said.

Marshalls did not respond to a request for comment. Zamora could not be reached for comment after attempts were made to find his telephone number.

San Jose DJ Eddie House tweeted the video on the evening of August 17, stating at the time, "Today at Marshalls in Campbell, Ca this 'Kevin' didn't want to wear a mask. Hurled offensive comments to the workers, my friends, to customers while exposing gestures to the public. I'm reaching out to y'all in the ether to expose this m'fer to the world!" He stated the videographer was his friend.

Today at Marshalls in Campbell, Ca this Kevin didn't want to wear a mask. Hurled offensive comments to the workers, my friends, to customers while exposing gestures to the public. I'm reaching out to y'all in the ether to expose this m'fer to the world! #KarenStrikesAgain #mask pic.twitter.com/ftBkGsDqcW— Eddie House (@fetcharooskies) August 18, 2020

Gaskin may be familiar to some from his days as the host of "Open House," a radio and television show about San Francisco real estate, in the 2000s. In 2004, he hosted "OUT Spoken" for Comcast public access television, a show centered on the LGBTQ community.

Gaskin started the magazine Benefit about San Francisco's philanthropic community and claims to be a co-founder of the LGBTQ magazine Gloss along with Bevin Shamel. Gloss publisher Cecil Russell, however, said Gaskin did not co-found the magazine but did contribute content for it in the past.

Gaskin was recommended for the San Francisco Arts Task Force in 2006 by then-Mayor Gavin Newsom. In 2006, Gaskin hired Ruby Rippey-Tourk as a producer for Benefit's television and radio auxiliaries.

Several years after Rippey-Tourk — whom Gaskin described as his best friend — had an affair with Newsom, Gaskin left the city and changed his name.

Gaskin told the B.A.R. September 1 that he'd wanted to focus more on his identity as an artist.