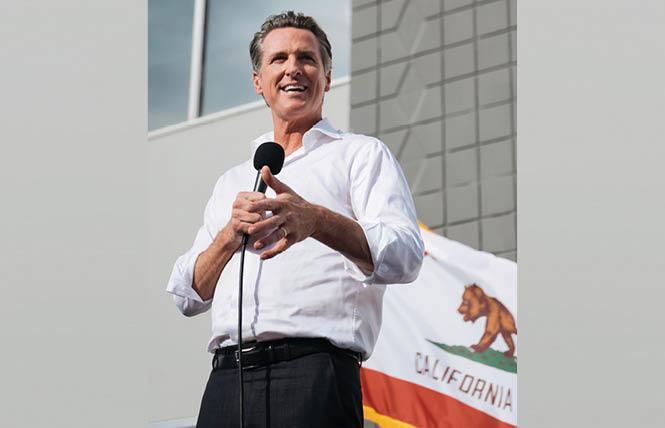 Several LGBTQ bills have been sent to Governor Gavin Newsom as the legislative session comes to an end August 31. Photo: Courtesy Governor's office

California lawmakers have sent Governor Gavin Newsom legislation that would allow transgender inmates to be housed with others of the same gender and require state health officials to track LGBTQ people impacted by the novel coronavirus outbreak.

They also sent Newsom a bill that would end discriminatory insurance practices against people living with HIV and AIDS. The trio of bills is among a number of LGBTQ pieces of legislation the state Legislature is expected to approve by the end of Monday and send to the governor for his signature.

After several years of debate on changing state prison rules that require transgender inmates to be housed based on the sex they were assigned at birth, legislators have finally passed Senate Bill 132, the Transgender Respect, Agency and Dignity Act authored by gay state Senator Scott Wiener (D-San Francisco). It requires incarcerated transgender individuals in the custody of the state's Department of Corrections and Rehabilitation to be classified and housed with other inmates based on the gender identity of their choice. Thus female trans inmates, currently housed in male prisons, could choose to be placed in female prisons.

"Transgender people in prison — particularly trans women — are at severe risk of assault and sexual victimization because they're automatically housed by their birth-assigned sex," stated Wiener. "I'm authoring this legislation to ensure they can be housed where they're safest. Transgender people should not be forced into isolation because they aren't protected where they are forced to live. They should be able live by their gender, and SB 132 will allow for that outcome."

Transgender, Gender-Variant, & Intersex Justice Project legal director Alex Binsfeld said the bill is an important step in protecting transgender inmates from being harassed and attacked while in custody of the state.

"While transgender, gender-variant, and intersex (TGI) people will never be safe in prisons, SB 132 will be a useful tool for TGI people housed in California prisons to access safer housing and to advocate that their correct pronouns and honorifics be used," stated Binsfeld.

As state prison officials have worked with Wiener and LGBTQ advocates on it, Newsom is expected to sign it into law. He has until September 30 to do so, and it would become effective January 1.

SOGI data collection
Lawmakers also sent to Newsom Wiener's SB 932, which will require state public health officials to track how many LGBTQ people are being infected, hospitalized, and placed in intensive care due to the coronavirus, as well as how many have recovered versus died. Throughout the spring and early summer state health officials were not tracking such data, to the consternation of LGBTQ lawmakers, allies, and advocates since previous legislation the state enacted had required state public health officials to collect sexual orientation and gender identity data.

"We must never again allow members of the LGBTQ+ community to be erased or ignored during a pandemic or any other health crisis," stated Equality California Executive Director Rick Chavez Zbur, whose LGBTQ statewide advocacy organization had made SB 932 its top legislative priority of the year. "I lost too many friends and loved ones during the AIDS crisis to watch that happen again. We're so grateful to Senator Wiener for championing this critical issue and to Governor Newsom and his administration for the decisive action they took last month."

For several years Gonzalez has been trying to pass the bill, which is backed by gay Insurance Commissioner Ricardo Lara. After first being introduced as a stand-alone bill, it was bundled together into a more expansive piece of legislation.

"I am very grateful for the support of my Senate and Assembly colleagues on this critical legislation. I must especially thank Senate Committee on Insurance Chair, Susan Rubio, for allowing me to continue with this policy under their committee's omnibus bill," stated Gonzalez, noting it "is a huge step to ensure that Californians living with HIV and their families have equal access to life and disability income insurance coverage."

Added Lara, "With HIV-positive individuals living longer, healthier lives than before, we need to end discrimination when it comes to accessing life and disability income insurance to protect themselves and their loved ones. I thank Senator Lena Gonzalez for authoring SB 1255, which will finally give the same insurance rights to people living with HIV that others have."

Other bills awaiting final votes before being sent to Newsom include Wiener's SB 145, which would ensure LGBT adolescents are treated the same as their heterosexual peers when faced with the possibility of being listed on the state's sex offender registry. It was held up last year in the Assembly Appropriations Committee by its chair, Assemblywoman Lorena Gonzalez (D-San Diego), who wanted more time to address the issue.

Another bill held over from last year, SB 741 authored by lesbian state Senator Cathleen Galgiani (D-Stockton), would allow transgender Californians to update their marriage certificates and the birth certificates of their children to accurately reflect their legal name and gender, while still protecting their privacy.

It initially appeared dead for the year due to its $15 million price tag, as state lawmakers shelved most bills not explicitly related to the state's COVID response. But after transgender advocates protested, led by the TransLatin@ Coalition in Los Angeles, lawmakers stripped the funding requirement out of the bill and allowed it to move forward.

"AB 2218 is historic for our community," Bamby Salcedo, a trans woman who is the president and CEO of the coalition, told the B.A.R. "In the history of the state of California there's not been a bill that has been designed, organized crafted and pushed specifically by trans and gender-nonconforming people. This is a sign that we can design the destiny of our people."

Wiener was a principal co-author and said he is hopeful Newsom will sign the bill.

"AB 2218 is landmark legislation that will help ensure that transgender, gender-nonconforming and intersex people receive the health care they need," Wiener stated in a text message. "We are living in the worst health crises of our time and TGI people deserve access to healthcare. Governor Gavin Newsom is a strong ally to the LGBTQ community, also I am hopeful that he will sign AB 2218 into law."