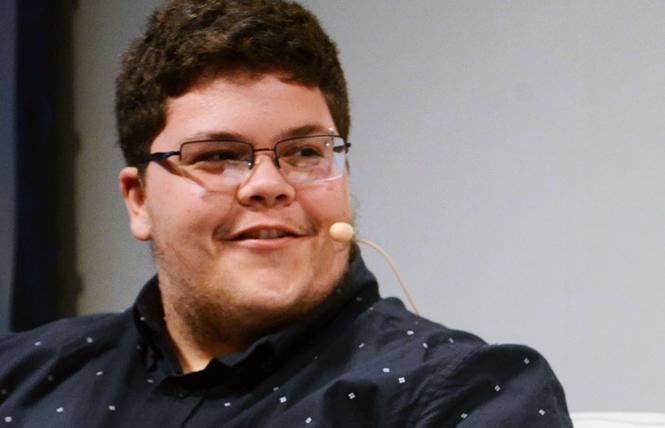 A federal appeals court panel made a favorable decision in Gavin Grimm's ongoing case to allow trans students to use school restrooms that match their gender identity. Photo: Rick Gerharter

The two new rulings came from the 4th Circuit and 11th U.S. Circuit Courts of Appeal, involving cases in Virginia and Florida where public high schools refused to allow transgender boys to use the boys' restroom.

Both cases were decided by three-judge panels and could now be appealed to the full bench in each circuit and, eventually, to the U.S. Supreme Court. Issues surrounding accommodating transgender students have been in litigation for some time and were a focus of one speaker at the Republican National Convention last week. The person, Cissie Graham Lynch, told viewers that Democrats have "pressured schools to allow boys to participate in girls' sports and use girls' locker rooms."

Both appeals panel decisions found that the refusal of schools to allow transgender boys to use the boys' restroom violated the students' U.S. constitutional right to equal protection and Title IX of the Education Amendments Act.

The stories of both transgender students — Gavin Grimm in Virginia and Drew Adams in Florida — are relatively similar. Both had been identified as female at birth but experienced a lifelong sense that they were males. Both sought and received help from their parents and medical experts; both transitioned to live as males; both had their driver's licenses and birth certificates amended to indicate they are male.

In both cases, the students began using the boys' restrooms with no problems at first. However, eventually, school officials began to hear complaints. In Grimm's case, it was from parents. In Adams' case, the complaints came from "two unidentified girl students" who simply saw Adams entering the boys' restroom.

"There were no complaints from boy students who shared bathroom facilities with Adams," noted the majority. "Regardless, school officials gave Mr. Adams two choices: use a single-stall, gender-neutral bathroom in the school office, or use the girls' facilities."

Both Grimm and Adams said they felt stigmatized by being barred from using the boys' restrooms and required to use an alternative facility.

Interestingly, in the case of Adams, the school district of St. John's County had adopted a policy requiring teachers to address LGBTQ students by their preferred names and pronouns and promoted other LGBT-sensitive rules around attire, bullying, and privacy.

And both majority decisions relied on Bostock.

"With Bostock's guidance, we conclude that Title IX, like Title VII, prohibits discrimination against a person because he is transgender, because this constitutes discrimination based on sex," said the 11th Circuit in the Adams case.

"After the Supreme Court's recent decision in Bostock v. Clayton County, we have little difficulty holding that a bathroom policy precluding Grimm from using the boys' restrooms discriminated against him 'on the basis of sex'," said the 4th Circuit majority.

"At the heart of this appeal is whether equal protection and Title IX can protect transgender students from school bathroom policies that prohibit them from affirming their gender," wrote Judge Henry Floyd, in the Grimm case. "We join a growing consensus of courts in holding that the answer is resoundingly yes."

In the Adams decision, the 11th Circuit majority applauded the Florida school district's goal of protecting "the bodily privacy of young students." But, said the majority, while it makes sense to designate some restrooms as being for boys and others for girls, it does not protect the bodily privacy of students to force a student who was designated at birth as a girl to use a girls' restroom after they have transitioned to living as a male.

The 11th Circuit panel noted that the St. John's school board could not point to any complaints from boys when Adams was using the boys' restroom or "any incidents across the country in which allowing transgender students to use the restroom according to their gender identity compromised other students' privacy."

"In fact, the [St. John's] School Board conceded at oral argument it was 'fair' that some transgender students in the school district may already be using the bathroom consistent with their gender identity, without anyone's knowledge," said the majority. And the court refused to accept, without any evidence, the school district's claim that the "mere presence" of a transgender boy in the boys' restroom violates the privacy of other boys using the restroom.

The 11th Circuit case was brought by Adams when he was a student at Nease High School, with the help of Lambda Legal Defense and Education Fund.
The 4th Circuit lawsuit was brought by Grimm with the help of the American Civil Liberties Union when he was a junior at Gloucester High School. School officials initially allowed Grimm to use the boys' restroom, but some parents objected, and the school board adopted a policy that required transgender students to use an "alternative" private restroom.

Grimm, now 21, is a student at Berkeley City College in the Bay Area. The outcome of the case is still important to him, though, because Gloucester High School has refused to change his records, which could be relevant to applications to other schools and jobs.

In the decision, Floyd took considerable time to discuss "what it means to be transgender" in a way that would be helpful to a person who is unfamiliar with the term to understand its implications. He noted, for instance, "there have always been" people who "express" a gender "we would think of as opposite to their assigned sex."

"Such people are transgender, and they represent approximately 0.6% of the United States adult population, or 1.4 million adults," wrote Floyd. "Just like being cisgender, being transgender is natural and is not a choice."

While transgender people face "major mental health disparities," wrote Floyd, being transgender is "not a psychiatric condition, and 'implies no impairment'...." The diagnosis of gender dysphoria describes the "significant distress experienced by some transgender people resulting from the incongruence between the gender with which they identify and their sex as identified at birth."