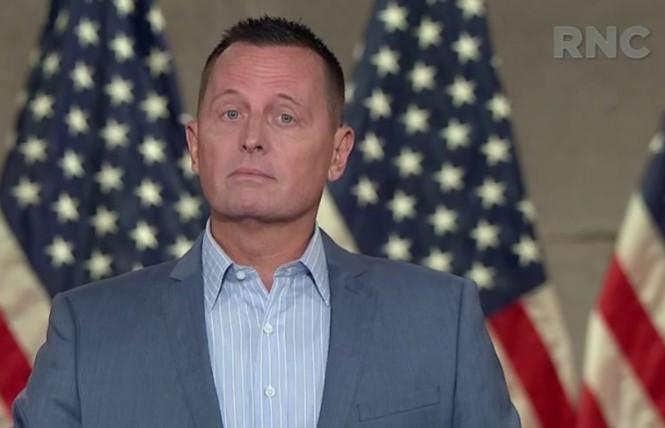 Richard Grenell, the first gay person to hold a cabinet-level position, didn't mention his sexual orientation or LGBTQ issues during his August 26 remarks at the virtual Republican National Convention.

Grenell, President Donald Trump's former ambassador to Germany who served for a time as the acting director of national intelligence, instead praised Trump's foreign policy Wednesday.

Grenell, 53, made history when he served as national intelligence director, which, while not in the president's cabinet, is considered cabinet-level.

"President Trump rightly calls our foreign policy 'America First,'" Grenell said. "America First is simply the belief that politicians should focus on the equality and dignity of every American and that this duty is fulfilled by promoting the safety and wealth of the American people above all else. That's America First, that's the Trump doctrine, and that, my friends, is four more years."

Grenell said that Trump's foreign policy is a contrast with those of the Barack Obama, Bill Clinton, and both Bush administrations, and said the president is a nationalist.

"At the end of the Cold War, Democrats and Republicans in Washington bought into the illusion that the whole world would start to resemble America and so they started to pursue unlimited globalization," Grenell said. "While Washington politicians built a global system, American wages stagnated. Our great cities and industries were hollowed out. That's what happened when Washington stopped being the capital of the United States and started being the capital of the world. ... Donald Trump's administration has always made it clear that our priority is the American people's security. In four short years Donald Trump has led even some Washington Democrats to agree about the nature of the Chinese threat. The Washington elites want you to think this kind of foreign policy is immoral and so they call it 'nationalist.'"

"As acting director of national intelligence I saw the Democrats' entire case for Russian collusion and what I saw made me sick to my stomach," Grenell said. "The Obama-Biden administration secretly launched a surveillance operation on the Trump campaign and silenced the many brave intelligence officials who spoke up against it."

A 2019 Justice Department report states that the inspector general "did not find documentary or testimonial evidence that political bias or improper motivation influenced [the] decision to open Crossfire Hurricane," referring to the FBI's investigation of key Trump associates on suspicion they were colluding with the Russian government.

A report released by a Republican-led Senate committee found that the Trump campaign's contacts with Russian spies constituted "a grave counterintelligence threat" to the United States.

There was some speculation that Grenell would speak about LGBTQ rights as he did in a pre-convention video, as the Bay Area Reporter previously reported. In the video, Grenell said Trump is the "most pro-gay president in American history" and attacked Biden for his past opposition to same-sex marriage.

As vice president, Biden came out in favor of same-sex marriage in 2012 and at the time was the highest-ranking official in the U.S. government to have done so. Trump expressed opposition to same-sex marriage for many years, including during his 2016 campaign. Shortly after his election victory, however, when CBS News' Leslie Stahl asked him if he supports same-sex marriage, he said "It's irrelevant because it was already settled. It's law. It was settled in the Supreme Court. I mean it's done." He went on to state he is "fine with that."

The Trump administration has been criticized for hostility to LGBTQ rights. It filed a legal brief arguing that Title VII of the Civil Rights Act of 1964 should not protect LGBTQ people from job discrimination, and another arguing adoption agencies should be able to refuse to work with same-sex couples.

The Supreme Court in June ruled that Title VII of the Civil Rights Act does protect LGBT workers both on sexual orientation and transgender status.

The Trump administration also ended an Obama-era policy allowing transgender people to serve in the military and tried to change Obama-era language in federal health regulations designed to protect trans patients from discrimination.

Human Rights Campaign President Alphonso David attacked Grenell for associating with "a stage filled all week with transphobes and homophobes," referring to the quadrennial gathering of the nation's Republicans. HRC has endorsed Biden.

"'Gaslight Grenell' doesn't speak for LGBTQ people or our movement. As a gay man, 'Gaslight Grenell' couldn't even say 'gay' or 'LGBTQ,' which is unsurprising, given that this administration has taken every opportunity to dehumanize LGBTQ people and undermine our basic rights," David said. "It's also unsurprising given we have exposed Trump's lies and Grennell's hypocrisy in supporting him. Trump and his campaign are attempting to win our allies' votes while ignoring our community's voices and disregarding the dignity of our lives. LGBTQ people won't fall for it, and neither will voters who value equality."

Greg Gandrud, a California Trump delegate to the convention, told the B.A.R. that the party has been changing in recent years.

"I think it's evolving more and more rapidly," Gandrud said. "Particularly for the younger folks, it's not an issue anymore and I've found I've gotten a lot of support for people who used to oppose us who now have come around to supporting us."

The national Republican Party did not issue a new platform this year, re-releasing its 2016 platform and making a broad statement in support of the Trump administration. The platform states that "our laws and our government's regulations should recognize marriage as the union of one man and one woman and actively promote married family life as the basis of a stable and prosperous society."

Four years ago, Log Cabin Republicans, the national gay GOP organization, came out against the platform.

Gandrud said he thinks the language could have changed if the party had a debate on the platform this year.

"We came close to changing the state platform," Gandrud said. "I think the [national] platform would have been changed, unfortunately there was no opportunity for that because of COVID."

"I was really impressed with it," Gandrud said, referring to Grenell's speech, "especially how he explained how the president has kept us out of new wars and the philosophy underpinning all of that, because we need to put our country first."

Fred Schein, a gay man who is on the board of the California Log Cabin Republicans, said he thought it was OK that Grenell didn't mention being gay in his speech.

Schein said he is looking forward to Trump's speech Thursday, the last of the convention.

"President Trump will have to pull together a lot of things and I have no idea how he'll do that," Schein said. "When you have a convention like this, as the Democrats did, you have to bring it together and sum it all up."

Charles Moran, at-large director of Log Cabin Republicans and a California delegate pledged to Trump, told the B.A.R. August 21 that the delegates from each state proxied their votes to one of six members of the delegation. Those six traveled to the convention site in Charlotte, North Carolina, where they voted August 24. (Democratic delegates held a virtual roll-call last week.)

Trump received the votes of all 2,550 delegates to the convention, and will formally accept that nomination Thursday.