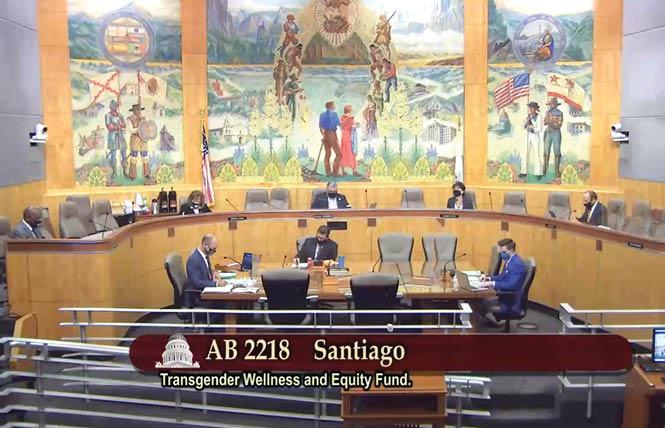 The Senate Appropriations Committee passed AB 2218 Thursday but the bill to establish a transgender wellness fund still has to clear the full Senate. Photo: Screengrab via John Ferrannini

A bill to establish a transgender wellness fund that was thought to be a victim of the novel coronavirus pandemic cleared a state Senate panel Thursday and is headed for a floor vote.

Assembly Bill 2218, which would establish a transgender wellness and equity fund, passed the state Senate Appropriations Committee August 20 in a 5-2 vote.

The bill will be voted on by the full Senate "sometime this week," Catie Stewart, communications director for gay state Senator Scott Wiener (D-San Francisco), said Monday, August 24. Wiener is a principal co-author of AB 2218.

As the Bay Area Reporter previously reported, the bill was considered dead just weeks ago before activists from the TransLatin@ Coalition put pressure on health committee lawmakers to bring it up for a vote. After the health committee, the bill had to go through appropriations before it could be sent to the Senate floor.

"I feel good that AB 2218 passed through," Bamby Salcedo, a trans Latina immigrant woman who is the president and CEO of the coalition, said in a phone interview with the B.A.R. August 20. "I think this is definitely a sign that shows when people mobilize and participate in their right to participate, changes are created. When you call people directly, people are able to use their heart and see the need for trans people to have some sort of dignity in our society."

Salcedo tied the bill's passage out of appropriations to a broader understanding of the need to ameliorate the effects of discrimination against the trans community.

"Trans people continue to have a lack of resources and now we are experiencing this global pandemic," Salcedo said. "We're glad legislators are opening their minds and hearts."

The bill was opposed by committee vice chair Senator Patricia Bates (R-Laguna Niguel) and Senator Brian Jones (R-Santee), neither of whom responded immediately to requests for comment.

Portantino and Assemblyman Miguel Santiago (D-Los Angeles), the latter of whom introduced the legislation in the state Assembly, have also not provided comment as of press time.

"California hasn't done nearly enough for our trans siblings," Wiener said. "AB 2218 is a step toward standing up for a community that's been marginalized and stigmatized for way too long. It creates a foundation for future funding for trans health needs."

Updated, 8/24/20: This article has been updated with information on the upcoming floor vote.