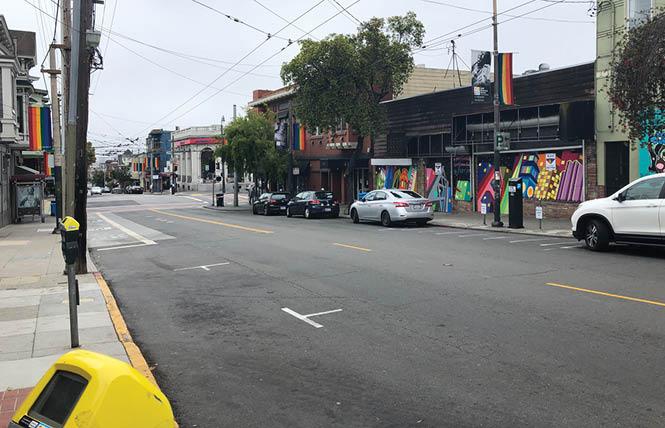 Two blocks of 18th Street in the Castro will be allowed to close on Sunday afternoon and evenings to allow for outdoor dining. Photo: Matthew S. Bajko

Castro businesses have been granted approval to turn two blocks of 18th Street in the heart of San Francisco's LGBTQ district into an outdoor dining plaza on Sundays through the end of the year, and if successful, could be extended to cover the entire weekend.

The permit goes into effect this Sunday, August 23, and will remain valid through December 27. It allows for 18th Street between Collingwood and Castro streets, and between Castro and Hartford streets, to be closed to vehicular traffic from 1 to 10 p.m. As a trial run, the Castro Merchants association is planning to test out the closure this Sunday from 2 to 7 p.m., according to its spokesman Dave Karraker.

"This is a very positive thing for all the businesses along this corridor," he said. "It will bring in needed foot traffic to the neighborhood, which will help out all of the businesses there."

According to the merchants group, restaurants expected to make use of the road closure are El Cápitan, Thai Chef, Harvey's, Gyro Express, Poesia, Blind Butcher, Lark, Oz Burger, and Kasa India. Bars the Edge, Toad Hall, the Mix and Midnight Sun are also planning to utilize the outdoor area, as is coffeehouse Starbucks.

For now the permit only covers Sundays at the request of the Castro Merchants, according to the office of gay District 8 Supervisor Rafael Mandelman. If the Sunday street closure proves successful, then the permit can be extended to also cover Fridays and Saturdays.

The permit, a copy of which was shared with the Bay Area Reporter, initially was written in a way that doesn't make it clear it is only good for Sundays and appeared to allow for the closure to occur seven days a week. But Karraker and Jacob Bintliff, a legislative aide to Mandelman who worked with the Castro Merchants on the permit request, both clarified to the B.A.R. it is meant to only cover Sundays for now and can be extended to include the other two days of the week. No additional days are being eyed, both said.

If it is revised to add Saturdays, the permit does stipulate that the street will not be closed down for Halloween, as October 31 falls on a Saturday this year. The Castro district hasn't hosted an official Halloween street party for years, as the annual event was canceled in 2007 following a series of violent events that led city officials to put the kibosh on the annual tradition.

The neighborhood's business association sought the permit as a way to help out restaurants and bars that have been struggling due to the novel coronavirus outbreak. Restrictions on the businesses being able to open have been in effect since mid-March, and city health officials allowed them to reopen solely for outdoor dining in July. Bars were given permission to do so if they teamed up with a nearby eatery to offer food to customers.

As such, under the street closure permit rules, drinking of alcohol will only be allowed at the dining areas set up on 18th Street overseen by the local businesses. The sidewalks must remain clear of tables and chairs to allow for pedestrian use at all times. Smoking will not be allowed, nor are food trucks permitted to operate there.

As the B.A.R. previously reported, the permit approval had been held up over fire vehicle access concerns and if volunteers would need to be stationed at the closed intersections. After weeks of discussions, a compromise was reached where the street closure could proceed so long as the merchants maintain an emergency access lane throughout the entire length of the street closure.

As stated in the permit, "This lane must be kept free of structures and physical obstructions, though it may be occupied by people." The fire department and Municipal Transportation Agency officials agreed not to require that volunteer monitors be stationed at the entrances into the street closure area.

"We are very pleased that, after much advocacy, SFFD and MTA were able to work out barricade requirements that do not require a constant staff/volunteer presence at each barricade point, so that CMA's volunteer efforts can focus on supporting a safe and successful event throughout the area," wrote Bintliff in an email to the B.A.R.

Street dining begins in the Castro