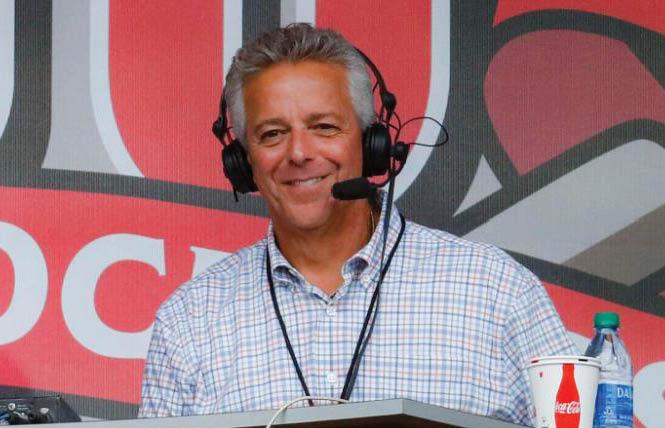 Cincinnati Reds broadcaster Thom Brennaman was suspended over his on-air use of an anti-gay slur during a game Wednesday. Photo: Courtesy CNN

The Cincinnati Reds suspended longtime broadcaster Thom Brennaman after he used an anti-gay slur on the air Wednesday (August 19).

Brennaman could be heard saying on the Fox Sports Ohio broadcast, "One of the fag capitals of the world," before then resuming his on-air duties, CNN reported. It's unknown what led to that remark and the context behind it. The comment was made after a commercial break during a doubleheader between the Reds and the Kansas City Royals in Kansas City, Missouri.

Here's my open letter to him.

As a Cincinnati native and longtime Reds fan from before either you or your father broadcast games for them, let me offer you some help and advice as public backlash descends upon you for referring to a city as a "fag" capital.

In your initial "apology," you said you were sorry "if" your statement offended anybody. Let me clear that uncertainty up.

It did. It most certainly offended me. As a native son and a fan, it especially disgusted me.

It also undoubtedly did worse than that for some people. You probably do not deal much with statistics on things like hate crimes or suicide rates among LGBTQ youth, but you're a bright fellow: common sense tells you that disparaging ridicule of any group is injurious to that group and emboldens those who would do them harm. I'm sure that as a person of faith, as you say you are, you realize that knowingly doing such harm to fellow humans is a sin.

Oh, wait: I almost forgot to introduce myself. For all you know, I am some wild-eyed activist who doesn't follow baseball, probably doesn't follow sports at all, or has never been around teams and athletes enough to understand their internal culture and that the language that would otherwise be offensive is in the sports world what our president would classify as "locker room talk."

That is not the case. I have been in and around sports almost all of my life as an athlete, spectator, coach, organizer, volunteer, advocate, and journalist.

I played my first Little League games in Ohio. During my college years, I spent countless hours in batting cages in Cincinnati, belting out line drives from a deep Pete Rose crouch. After shifts working in a cafeteria on the east side of town, I'd lie in my bed in the dark listening to game broadcasts by Joe Nuxhall and Al Michaels. I took my father to watch Don Gullett pitch a one-hit shutout of the Cubs. I took my friends there to watch Rose break the franchise record for hits. Made my first bet on the Reds when they were behind in Game 7 of the 1975 World Series. Flew from Alaska to Cincinnati to watch Rose as he chased down Ty Cobb.

In high school and college I wrestled and played rugby and soccer. As a cub reporter, I stole pitcher Jim Bouton's jacket so he'd have to run into me so I could get an interview. In 1982, I became the first openly gay sports editor at a major daily newspaper. I coached wrestling nine years in Alaska and spent the last 12 years, now in my 60s, coaching high school wrestling in San Francisco and Berkeley. I am the only person ever to wrestle in a USAW tournament on dual hip replacements. I am in the LGBT Sports Hall of Fame and the Wrestlers WithOut Borders Hall of Merit.

So, I am not a drive-by social critic taking exception to your comment. I would not have had much of a life had I not carved out a place in sports.

In your first response, you also said the use of the word "fag" was not reflective of who you are. The reality is a slip of the tongue usually does not draw upon unfamiliar vocabulary; instead, it inevitably comes from a term sitting upon the pile of the person's everyday vocabulary. It is there, ready to be used, without even a conscious effort to hurl it.

I don't think you'll lose your job over this and I certainly do not think you should. You'll get a slap on the wrist, contrition will be expressed, maybe even a sensitivity training session or two will be required, and then life will go on as usual for you. Maybe not for some individuals you have already harmed, but you undoubtedly will come out unscathed.

Now, I'm thinking outside the box here, and this may sound crazy, but here's a step you might consider taking if indeed you regret that you said what you did and not just that you were caught:

Don't distance yourself from your slur. Admit it was in your vocabulary, you regret that, and now you want to work to expel and reject it. Talk with activists and educators about LGBT issues and sports inclusion not because you are ordered to or to minimize the negative publicity: do it because as a person of faith you want to treat people better. Do it because it is the right thing to do.

I am the founder of a group called Equality Coaching Alliance. We have more than 1,000 members, all of them sports professionals at all different levels, from Olympic athletes to recreational coaches. We're here to talk if it is in your heart. All you have to do is call.