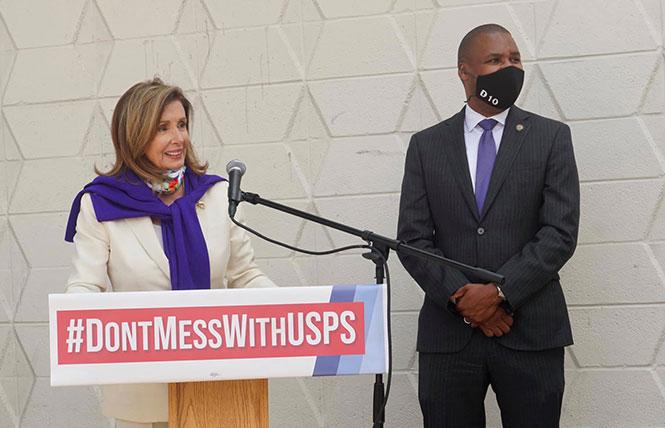 After sitting out the March primary race for San Francisco's 12th House District, the progressive Harvey Milk LGBTQ Democratic Club has endorsed House Speaker Nancy Pelosi (D-San Francisco) in the November 3 general election. The decision is a major snub for her democratic socialist opponent, Shahid Buttar, who had sought the club's endorsement.

A cisgender heterosexual man who also identifies as queer due to his gender expression being fluid, Buttar had rode a wave of favorable press coverage this spring after placing second in the March contest in order to advance to the fall election. Since only his and Pelosi's names will be on the November 3 ballot, it was seen as the first time that a progressive candidate would mount a serious challenge to Pelosi since she was first elected to her House seat in a special election in 1987 following the death that February of Congresswoman Sala Burton.

But then Buttar's campaign was rocked this summer by allegations he sexually harassed a woman he knew in D.C. and fostered a misogynistic workplace that led to 13 of his staffers, including his genderqueer campaign manager, to resign after the primary. Buttar has denied the charges, but the accusations have cost him support among San Francisco progressives.

Following a number of local leaders who publicly dropped their backing of Buttar, including fellow democratic socialist District 5 Supervisor Dean Preston, the Democratic Socialists of America local chapter rescinded its endorsement of him. A vote by the SF Berniecrats earlier this month to also unendorse Buttar fell short of the two-thirds majority vote threshold required to do so.

But with 56% of its members voting to rescind the endorsement, the political group's board issued a statement in which it pledged "to address the concerns of the majority of our club members who voted to revoke Mr. Buttar's endorsement and the strong minority who voted to uphold it. We recognize this is an ongoing issue and are committed to continuing to work to ensure it is addressed. Actions will continue to be taken to ensure progressives remain unified against the ruling class."

After a lengthy interview last month with Buttar that delved into the accusations alleged against him, the Milk club's political action committee had recommended that the full membership endorse Pelosi. The club voted to do so Tuesday night; the city's other main queer political group, the Alice B. Toklas LGBTQ Democratic Club, had endorsed Pelosi ahead of the March primary.

"The Milk club gets shit no matter what we do with CD-12. I just ride the wave and hope for the best," Milk club co-president Kevin Bard told the B.A.R. after announcing the results of this week's endorsement vote.

Pelosi had won the Milk club's support of her reelection bid in 2018. She was the second biggest donor, at the $1,500 "Instigator" level, to the group's 44th annual Gayla awards fundraiser, held virtually Saturday, August 15, due to the viral pandemic.

Coincidentally, with the Democratic National Convention also being held virtually this year, Pelosi was not in the host city of Milwaukee Tuesday but in San Francisco convening a news conference in the city's Bayview district with District 10 Supervisor Shamann Walton and postal union leaders to call out the actions of Postmaster General Louis DeJoy, who's been accused of meddling with postal operations in order to slow down mail delivery with an eye toward lifting President Donald Trump's chances for reelection in November.

Also Tuesday, Pelosi issued a statement hailing the Eastern District Court in New York, in the case of Walker v. Azar, for its enjoinder of the federal Department of Health and Human Services from allowing health care providers to discriminate against patients based on their sexual orientation or gender identity. The House of Representatives filed an amicus brief in support of the plaintiffs in the case.

"In the midst of a pandemic, the Trump administration has executed a relentless assault on the health and well-being of our communities, working tirelessly to dismantle all of the Affordable Care Act's life-saving protections for millions of Americans," stated Pelosi. "The Trump administration's discriminatory HHS rule, denying crucial health care benefits to LGBTQ Americans, is just the latest cruel attack in the Administration's ongoing anti-health care agenda. Today's district court decision enjoining this dangerous rule is a victory for the LGBTQ community and the rule of law."

Other electoral endorsements
As for the Milk club, it also officially endorsed at its meeting Tuesday former vice president Joe Biden and Senator Kamala Harris (D-California) for president and vice president. Harris will officially accept her party's nomination Wednesday (August 19) and Biden will do so Thursday (August 20).

Republican John P. McDonnell is running against Ting in November for his 19th District Seat. Ting this summer acknowledged he had had an extramarital affair after a conservative online news site broke the news.

In the races for the city's odd-numbered supervisor districts on the fall ballot, the club members approved all of the PAC's recommendations to endorse progressive candidates in the contests. Incumbents Supervisor Aaron Peskin (District 3), Hillary Ronen (District 9), and Preston all secured Milk's support for their reelection bids.