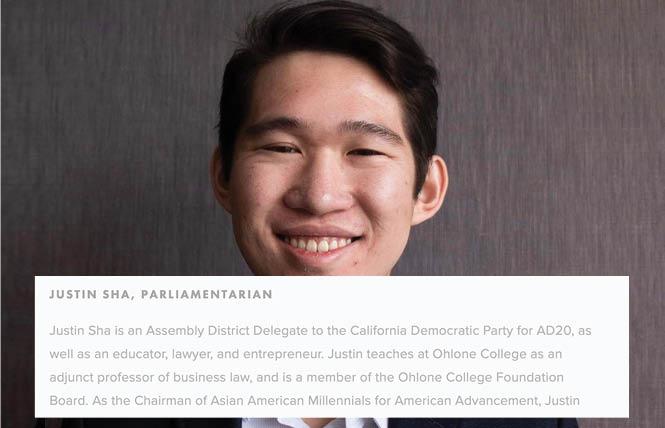 A screenshot of Fremont mayoral candidate Justin Sha's bio on the website of a young Democrats club had listed him as a lawyer, before it was changed. Photo: Courtesy South Alameda County Young Democrats.

In 2018, when Justin Sha sought a Fremont City Council seat, his ballot designation told voters he was an "entrepreneur/law clerk." Yet having graduated from UC Hastings College of the Law that year, Sha also claimed to be a lawyer.

For instance, on his questionnaire he submitted in seeking the endorsement of the Harvey Milk LGBTQ Democratic Club in San Francisco, Sha wrote, "I am a lawyer and an entrepreneur who has cofounded three startups." The progressive political club voted to endorse Sha, a gay man, in his bid for the East Bay city's District 4 council seat.

And Sha, 27, had continued to claim he was a lawyer, such as in his bio listed on the website of the South Alameda County Young Democrats. The political group's parliamentarian, Sha had been described as "an educator, lawyer, and entrepreneur."

But Thursday, after the Bay Area Reporter inquired about his claims to be a lawyer, Sha's bio on the club's website was changed to state, "He does business development, sales, and operations at an information technology company, and he also teaches at Ohlone College, where he also serves as a member of the Ohlone Community College District Foundation."

Sha, who requested the change, told the B.A.R. that, "Yes, I definitely made a mistake and should have been more careful. I've done a lot of self-reflection since the election and I'm definitely still learning."

The discrepancy came to light as Sha is now running to unseat Fremont Mayor Lily Mei, who is seeking a second term. He is one of five candidates who qualified to take on Mei, the city's first woman and person of color to be elected mayor.

In reporting on LGBTQ candidates running this fall in the East Bay, the B.A.R. had contacted Sha to confirm his mayoral bid, as he had not launched a campaign site. Subsequently, Sha asked that the B.A.R. update several articles that covered his city council bid two years ago to change references to him being a lawyer to say he was a law clerk.

In researching notes about his council candidacy to determine how such a mistake was made, Sha's Milk club questionnaire was found. When asked about the discrepancy regarding his job title, Sha confessed that he had made a "mistake" in referring to himself as a lawyer.

"Yes, it was definitely my mistake. I had grown up thinking that anyone who graduated from law school was a lawyer, whereas anyone who was licensed and practicing was an attorney," explained Sha, 27, who is Chinese American. "I am first-generation, and I know that sometimes others in my peer group might have had also confused that distinction as well."

Sha told the B.A.R. that he took his bar exam in July 2018 but did not know he had passed until November of that year. He is now in the process of trying to become a licensed attorney.

As part of that process, Sha said he is trying to correct online records that inaccurately refer to him as a lawyer. Thus, he contacted the B.A.R. about its archived articles.

"The articles recently came to my attention, and I wanted to correct a misstatement that I had made prior," Sha explained. "At the time, I was not a lawyer, as I had only just graduated from law school. While I had taken the Bar, I did not receive my results until later on. Currently, I am not practicing."

According to his LinkedIn page, Sha was a fellow at the Oakland City Attorney's office and a professor of business law at Ohlone College when he ran for city council in 2018. The next year the Oakland law office of Richard Cooc hired him as a clerk, states his profile.

Last September, Sha joined Fremont-based innovation technology company Droisys as a vice president. He was named its VP of customer services in February and continues to teach at the community college.

Sha told the B.A.R. that he has no plans to drop his mayoral bid, despite inaccurately describing himself as a lawyer. His ballot designation this year, he noted, will say he is a "VP/Professor."