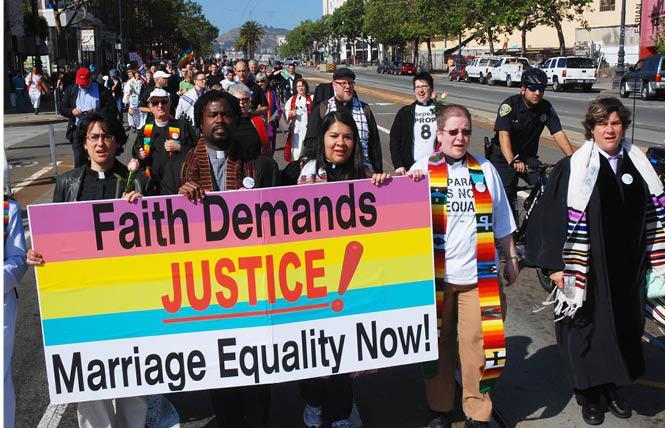 The tapes of the landmark 2010 Perry v. Schwarzenegger trial will not be released Wednesday due to a temporary stay ordered by the United States 9th Circuit Court of Appeals August 11.

As the Bay Area Reporter previously reported, Judge William H. Orrick of the U.S. District Court for the Northern District of California had ordered July 9 that tapes of the 10-year-old trial — which determined Prop 8 to be unconstitutional and led the way to allowing same-sex marriage to be legal again in the Golden State — be released August 12.

Earlier this year, some Prop 8 proponents asked Orrick to extend the 10-year seal, and a hearing on the matter was held in Orrick's virtual courtroom June 17. KQED-TV, the Bay Area affiliate of the Public Broadcasting System, wanted access to the tapes for documentary purposes.

Early August 11, Orrick issued an order regarding the form of release.

"All of the identified recordings from the trial will be available in streaming format on the Northern District of California's YouTube channel," Orrick wrote in the order. "In addition, the original source files (MP4 and MPG format, compressed into individual Zip files) will be available for free download on the Northern District's website: https://cand.uscourts.gov/. Information and instructions on downloading and viewing video files will also be posted on cand.uscourts.gov"

"The court will work expeditiously to get the recordings up and accessible on those sites as soon as practicable," the order continued.

However, the Prop 8 proponents who had wanted the tapes to be kept under seal — citing a promise made by Judge Vaughn Walker at the time the tapes were made — had appealed Orrick's decision to the 9th Circuit Court of Appeals. Walker, who is retired, came out as gay after the trial.

"In response to appellants' motion to stay the district court's July 9, 2020 order pending appeal, we grant a temporary stay of the order to preserve the status quo pending consideration of the appeal on the merits," the order states.

The order was filed by 9th Circuit Judges Sidney R. Thomas, Mary M. Schroeder, and Consuelo Maria Callahan. It goes on to state that the appellants of Orrick's decision have to have their opening brief and excerpts of record submitted by September 9. The respondents' answering briefs are due on October 9 and the court will hear this appeal sometime in December 2020.

Thomas Burke, an attorney for KQED-TV, issued a statement to the B.A.R. August 11 via email.
"While it's disappointing that the recordings of the historic Prop 8 trial were not released this week, the Ninth Circuit has, on its own, expedited this appeal," Burke stated. "We look forward to having a resolution as quickly as possible in the 9th Circuit."

Andrew Pugno and Charles J. Cooper, attorneys for the proponents, did not respond to requests for comment as of press time.

The Reporters Committee of Freedom of the Press, joined by some 36 news media organizations, had beseeched the district court for the tapes' release in an amicus brief.

Caitlin Vogus, a straight ally who is an attorney with the Reporters Committee, told the B.A.R. in an August 12 phone interview that it's disappointing people have to wait longer to see the trial tapes.

"We are disappointed that the court has granted the stay because the public has waited too long to see these tapes, but we are happy the court has expedited the briefing schedule," Vogus said. "It's not possible to tell how the court will rule based on the stay, but I think the 9th Circuit understands that access to these tapes is very important to the public and to the judicial branch."

Updated, 8/11/20: This article has been updated with comments from KQED's attorney and the Reporter's Committee.