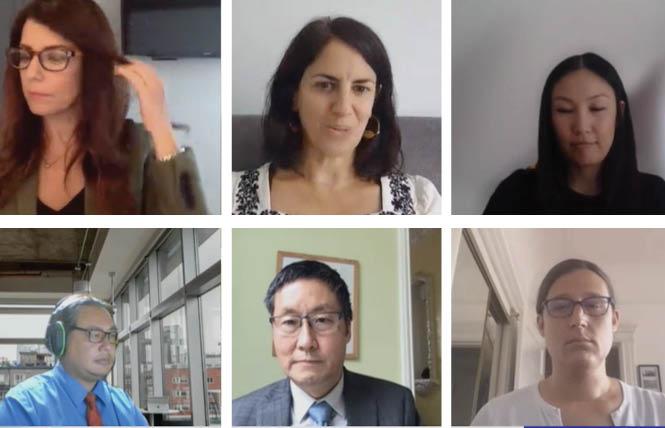 The San Francisco Board of Supervisors rules committee voted 3-0 Monday, August 10, to recommend the nominations of two women to the San Francisco Municipal Transportation Agency's board.

The full Board of Supervisors is expected to soon take up the matter.

Jane Natoli, a transgender woman, was nominated by Mayor London Breed back in April. Her hearing was continued for several months as the committee had to hear potential ballot measures for November, chair Hillary Ronen said at the start of the meeting. She was joined by committee members Supervisor Gordon Mar and Catherine Stefani.

If confirmed by the full Board of Supervisors, Natoli would be the first out trans commissioner on the SFMTA board.

"It's an honor to be recommended for approval to the full Board of Supervisors from the Rules committee and I appreciate the diligent questions of Chair Ronen and Supervisors Stefani and Mar," Natoli wrote in an email. "I look forward to sharing my skills, experience, and what I can bring to the SFMTA Board of Directors with the full board soon."

The committee also held a hearing on SFMTA board nominee Sharon Lai, a former senior planner with the San Francisco Planning Department. She was also nominated by Breed and if confirmed by the full board, would be the only Asian and Pacific Islander SFMTA commissioner.

Just before the committee's vote, Ronen asked for a commitment from Natoli and Lai not to increase fares.

"I would vote against a fare increase," Natoli said.

Ronen said she would support Natoli's nomination Monday, but did not commit to doing so at the full board meeting.

During the hearing, Natoli said that SFMTA needs to look beyond data when determining which transit lines to restore amid the pandemic.

"If we're not bringing lines back, we need to be mindful," she said, pointing out that some bus lines serve people in hillside areas. "We need to figure out other ways of serving people or get that service back."

On the issue of fare recovery, or people who don't pay, Natoli said she has seen some of that on Muni lines she's ridden.

"I don't think that should be the highest priority," she said. "Which lines are we doing it on and who are we getting? I know it's important in a theoretical sense, I really want to look at how we're doing that — throughout the city and not just in some parts."

In terms of Muni recovering from the economic recession that's a result of the pandemic, Natoli said that a stable funding source for Muni is important, but not fare increases. She mentioned vehicle license fees that gay former state senator Mark Leno (D-San Francisco) worked on that would have raised $73 million at that time.

"Other sources that aren't fare increases. Now is not the time for that," she said, before more forcefully answering that question later.

Natoli said in her opening remarks that she came to her interest in transit through work with safer streets. She is also a former board member of the San Francisco Bicycle Coalition.

Brian Wiedenmeier, a gay man who's executive director of the 10,000-member organization, spoke during the hearing and voices the coalition's support for both Natoli and Lai.

"Jane Natoli was an elected member of our board. She is professional and hardworking," he said.

He added that representation of trans people on the SFMTA board is important, and cited her work as a board member of the San Francisco LGBT Community Center.

Other speakers also praised both nominees.

"As an LGBTQ+ member," Martin Munoz said that Natoli's representation is important, and as an immigrant he appreciates Lai's experience.

"As a trans person I know representation matters," he said.

Rebecca Rolfe, executive director of the LGBT center, urged the committee to forward Natoli's nomination to the full board.

The Harvey Milk LGBTQ Democratic Club opposed Natoli's appointment. In a letter sent to the rules committee that was obtained by the Bay Area Reporter, it said that while it generally supports LGBTQ people for city boards and commissions, it said her record shows she won't represent the interests of the most marginalized people, "particularly people of color, queer people of color, seniors, and people with disabilities who depend on safe pedestrian access and public transportation on a daily basis."

Ronen said at the end of the hearing that she would be reaching out to the club before the full board's vote to further discuss the matter.

The Alice B. Toklas LGBT Democratic Club sent a letter in support of Natoli.

Many others spoke during public comment in support of Natoli, including two teachers, one also a trans mom, who said the city needs more positive trans role models in city government who are qualified to serve.

Updated, 8/10/20: This article has been updated with a comment from Jane Natoli.