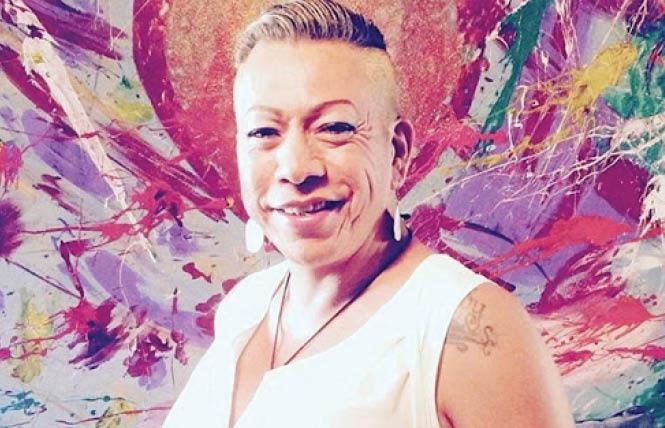 Bamby Salcedo is president and CEO of the TransLatin@ Coalition. Photo: Courtesy www.BambySalcedo.com

A bill that would create a Transgender Wellness and Equity Fund to provide health grants to trans-led organizations and hospitals that passed the state Assembly is most likely not going forward this year, a state senator's aide told the Bay Area Reporter.

There will be a virtual hearing on the bill Saturday, August 1.

Santiago told the B.A.R. at that time that AB 2218 would establish the fund and appropriate to it $15 million of a $100 million allocation that activists were seeking.

The office of state Senator Dr. Richard Pan (D-Sacramento), chair of the committee, confirmed to the B.A.R. July 30 that the bill will not be heard this year.

"In any other year, the committee would hear every bill, but given the extraordinary COVID-19 crisis and the real-time constraints put on policy committees, the time wasn't there," Pan spokeswoman Shannan Velayas stated in an email. "That is why committee chairs were directed to evaluate and prioritize bills based on relevance to the current crisis our state and nation faces."

The TransLatin@ Coalition for its part, however, said that it is a mistake to characterize the legislation as not having to do with COVID-19.

"This bill is particularly important because it looks at health in a holistic way," Bamby Salcedo, the president and CEO of the coalition, said in a July 30 phone interview with the B.A.R.

"Obviously, this is very disheartening that [Pan] does not understand the overall issues that the trans community is facing in this global health pandemic here in the state of California and are going to be even further behind in our society. Health is important for any individual to live, drive, and survive," she said.

The coalition is sending emails to supporters asking them to call Pan's Capitol and district offices to explain why AB 2218 is important to them.

Salcedo, who identifies as a trans Latina immigrant woman, said that she has heard from the office of gay state Senator Scott Wiener (D-San Francisco), who was listed on the bill as a principal co-author.

When contacted by the B.A.R. July 29, a spokeswoman for Wiener said that he "wants to do everything in our power to get this funding but understands the current context."

"I fully support the bill," Wiener said in a statement provided to the B.A.R. "We will continue to work in the budget to obtain funds to support the trans community, understanding that we're experiencing an economic collapse and massive budget deficit."

Meanwhile, some religious conservatives are celebrating what they characterized as the defeat of what they said is a "dangerous and controversial bill."

"The people of California spoke and the Senate Health Committee listened," Jonathan Keller, the president and CEO of the California Family Council, stated in an emailed message to supporters. "We thank God that California lawmakers heard the voice of their constituents and chose not to fund mutilating surgeries and sterilizing hormones."

Salcedo said that legislators need to "remember who put them there."

Saturday's hearing will be at 10 a.m. It is viewable through a livestream on the state Senate website.

Santiago did not reply to a request for comment for this story as of press time.