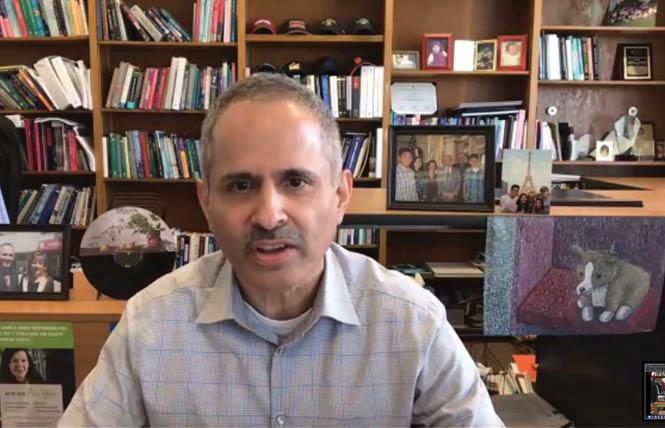 In a dire warning to San Franciscans, the city's health officer said the current surge of new COVID-19 cases could bring a 500% increase in hospitalizations by fall, if residents don't improve their use of the public health guidelines.

Dr. Tomás Aragón gave a peek into the future of COVID-19 in the city during a July 29 virtual meeting sponsored by Manny's, the gay-owned cafe and event space in the Mission.

On Thursday, city Health Director Dr. Grant Colfax, a gay man hired by Mayor London Breed last year, told reporters that in a "plausible worst case scenario," the city could reach as many as 2,400 hospitalizations and 1,800 deaths, the San Francisco Chronicle reported.

On Wednesday, Aragón, answering questions from host Manny Yekutiel and from viewers watching the Zoom presentation, said the city's current surge in new cases and hospitalizations could quickly explode to unprecedented demand for medical care if current trends are not reversed.

He pointed out that while San Francisco is experiencing a less severe pandemic compared to other parts of the state and country, such as Los Angeles and Florida, the rising reproductive rate, if not curbed, could quickly raise number of hospitalized patients from 100 in late July to 500 or more by fall.

The reproductive rate is a key metric in measuring how fast a virus is growing, and represents the average number of people who become infected by a sick person, he explained. When the number is above 1, a virus spreads quickly and can only die off when the rate falls below 1. San Francisco's rate was below 1 through April and May, but began to climb in June. The current rate is 1.3, Aragón said.

This surge, said Aragón, is "not an OK place" for the city, putting it at a "dangerous level." The spike developed, he said, because the city "opened up too fast" at the same time people relaxed their use of public health prevention methods, including wearing face coverings at all times and distancing from other people.

Stumbling blocks
The city's stumbling blocks have varied over the past six months. Early problems, said Aragón, included a lack of testing. Once the testing ramped up, a delay in getting test results back developed. Seven-day waits in the city are now common, hampering the use of contact tracing.

Those delays could be mitigated with a so-called rapid test, now under development, although such tests are less accurate and yield more false-positives, he said.

While the majority of people who test positive either have no sign of illness or have mild symptoms, the long-term effects of the illness are still unknown. It's a "multi-system disease," Aragón said. Patients can develop a wide range of ailments including the need for amputations, strokes, and heart attacks. People with pre-existing conditions, such as lung or heart conditions or obesity, face higher odds of developing serious illness, he said. Also, he said, "we don't know how much immunity" people who have been infected have, meaning it is possible that they may also be at risk of getting reinfected.

Life won't be back to normal until a "large proportion" of the population becomes immunized with a vaccine, said Aragón. Until that happens, "we are planning for a worst case scenario," he said.

Posing what he called a "controversial question," Yekutiel asked Aragón how he sees the question of balancing the impact of the virus killing people versus the health issues that come about when people lose their jobs or businesses and the other "cascading effects" of a tumbling economy.

"That's the hardest part of the job," said Aragón, who said he works "seven days a week." But "if you have an infectious disease with major consequences, you have to interrupt transmission" of the virus through a shutdown of business, he added.

Based on current research, Aragón believes it's more effective to be "really aggressive up front" in restricting the economy. Long term, he said that approach will actually "save the economy" by preventing disease and death, which also keep businesses closed.

"You can rebuild a business but not a life" that has been lost, he said.

Aragón said he doesn't think it will be necessary to return to the total shutdown that was in place in the spring.

Asked for the most important steps the public can take to stop the virus, Aragón said wearing masks when people go out, physically distancing, hand washing, staying home from work if people feel sick, and getting tested.

"If everyone does their part, we should be able to avoid" more restrictions, he added.

To enable people to return to indoor dining at restaurants and go to bars, the city must get the reproductive rate back to less than 1, Aragón said. Eating and drinking indoors without a face covering "seems to be a driver of infections," he added.

There is also evidence that because so much is shut down in San Francisco, residents travel elsewhere, "and then come back infected" and spread it around, said Aragón.

The city's early shelter-in-place regulations prevented some 38,000 hospitalizations and 4,000 deaths, although it also caused "a lot of harm," he added.

Results presented from Mission and Pride COVID-19 testing
Sign up!