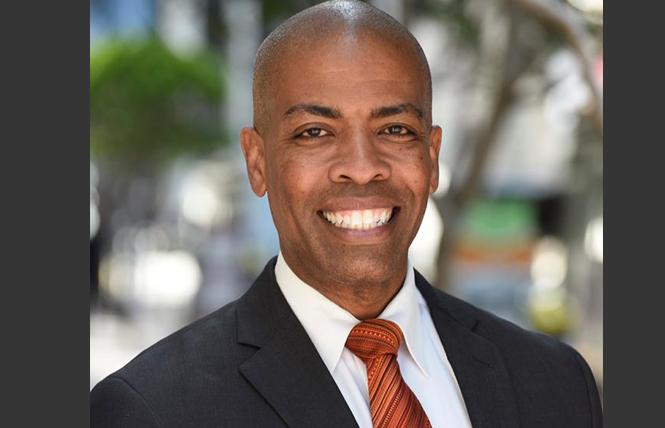 San Francisco Police have revised what constitutes a reportable use of force in the wake of nationwide protests over police violence following the killing of George Floyd in Minneapolis.

The new guidelines state that "physical controls that are used in any attempt to overcome any physical resistance" constitutes a use of police force, "regardless of injury or complaint of pain."

A 2016 version of the policy had defined "reportable force" as "any use of force which is required to overcome subject resistance to gain compliance that results in death, injury, complaint of injury in the presence of an officer, or complaint of pain that persists beyond the use of a physical control hold."

"We have expanded those definitions so that now, every use of force is reported," Henderson said in a July 17 phone interview with the Bay Area Reporter.

Henderson said that this change is important for measuring how police in the city interact with several populations, including people of color and the LGBTQ community.

"Use of force is one of those areas with a high race disparity — it has a high rate of being used against vulnerable communities," Henderson said. "The LGBT community are incarcerated at twice the rate of the heterosexual community; that's why drilling down on issues like this is so important. Getting to race neutrality also helps us get to neutrality in other vulnerable populations — the LGBT community, the immigrant community, seniors, the disabled community.

"The majority of the ideas and content came from working groups and from my policy director," Henderson added.

That policy director is Samara Marion, a lesbian who has been involved in these issues for decades. In a July 20 phone interview, Marion said much of the credit should go to Police Chief William Scott, whom she said had initiated the changes.

Scott did not respond to a request for comment.

"We were able to contribute to those changes and so we were a big part of what was adopted by the commission," Marion said, adding that the policy revision was made July 15 and went into effect immediately.

"Now, there's not a need of injury or complaint of pain, and that's important because it helps us understand who they're really using force against, in what situations, and whether it's disproportionate in certain populations," Marion said. "That information is critical."

The new policy also makes it reportable whenever an officer takes out their weapon.

"They have to document why and justify it under policy," Marion said. "When an officer takes out his or her gun, there are many things that happen. It changes dramatically the situation and an officer has created intense anxiety on the part of the person who is the subject of the weapon, so it's important to have to justify and document why."

Policy change comes amid national uproar
Henderson said that the policy change is one way the city is moving beyond the #8CantWait menu of police reforms.

#8CantWait is an agenda of police reforms championed by activists from Campaign Zero. A September 2016 study from that organization claims that if adopted, the eight policies can reduce police violence by up to 72%. There has been a renewed push for these to be instituted following Floyd's killing and they have been championed by former President Barack Obama.

SFPD has already adopted all eight, which include banning chokeholds and strangleholds, requiring de-escalation, requiring a warning before shooting, exhausting other non-lethal alternatives, banning shooting at moving vehicles, establishing a use of force continuum, requiring all force be reported, and requiring a duty for officers to intervene when another officer is inappropriately applying force.

Still, as the B.A.R. previously reported, SFPD is compliant with less than 15% of 272 reform recommendations made by the United States Department of Justice in 2016.

"Right now we're in a moment of 'we can't wait' ... and a national conversation about use of force," Henderson said. "We're at a watershed moment of civil unrest about a number of factors. The community is tired of seeing videos of incidents on body-worn cameras or cellphones. These are transgressions that people are shocked by and it is coming at a time when people are exacerbated by COVID-19 and where we're having deep conversations about policing in the budget.

"I think it's important that the community has evolved beyond the arguments we've been having for decades and have now transitioned into having an educated call to reform the use of force policy," Henderson added.

Henderson said that people are asking "how are we supposed to have law enforcement without [racial] disparities built in?" and added that, nationwide, "we know use of force is used 19.3 times more when it involves communities of color."

"We know that this has a high correlation with the LGBT community as well," Henderson added, saying that while LGBTQ people are more likely to be policed, they are also more likely not to seek the help of law enforcement because of real and perceived prejudicial attitudes on the part of police, which makes everyone less safe.

"The highest rate of underreporting is in our trans community, and it's as high as 82%," Henderson said. "That's huge."

Henderson said it's important people know that it is out LGBTQ people, such as he and Marion, who are fighting for these changes. While he knew of LGBTQ people in government when he was younger, they were mostly white, he said.

"Our community needs to be seen and it's really hard for young people growing up because I had no vision of what success could look like," Henderson said. "You can't replicate success that you can't define."

Petra DeJesus, a lesbian who sits on the Police Commission, could not be reached for comment.

In what Marion said was a "significant step forward," San Francisco police now have a Deaf and hard of hearing policy. As Mission Local reported last month, advocates have been pushing for such a policy for years.

Deaf and hard of hearing people have had problems being understood by officers when they have needed police intervention.

Henderson called the policy "Marion's baby." Marion said that she convened a working group in 2017 to help craft a policy, which was adopted July 15 by the Police Commission.

Orkid Sassouni, a straight ally who identifies as culturally Deaf with American Sign Language, was in that working group and is also a member of the Mayor's Disability Council, which is staffed by the Mayor's Office on Disability.

"I was invited to join the working group to help with their policies while I was on the council," Sassouni said through an interpreter on a July 24 phone call with the B.A.R. She joined the disability council in January 2017.

Sassouni, who is from New York, said she has had a few run-ins with police — including in San Francisco — who showed a lack of proficiency in communicating with Deaf and hard of hearing people.

"I got stopped by an officer who didn't believe I was Deaf. He thought I was trying to deceive him," Sassouni explained. "I had to watch as the officer calmed down and I waited an hour while he flipped through his book for something to charge me with. If an officer is behind you and yells at you to 'Stop!' and you can't hear him, he uses force. But there is no way for a Deaf person to even see nonverbal cues if they're behind you."

Sassouni said that when she went before a judge with a $200-$300 ticket, it was dismissed.

"They [officers] forced me to read lips," Sassouni said. "There is no bridge between a lot of officers and the Deaf community at all."

Marion said that there were seven complaints from Deaf and hard of hearing people in last year's DPA report, of which three were sustained.

"Part of the policy is a communication card, so that if the police officer stops someone on the street or in a traffic stop, they have a card with icons and graphics so that the officer can use the card and people can say they need a sign interpreter," Marion explained.

Marion added that police will use their phones to set up a video conference with a sign language interpreter to communicate with the person they have stopped.

Sassouni said that some of the work the committee dealt with included updating language such as "hearing impaired," which she said is not "an appropriate, ethical term to use for Deaf and hard of hearing people."

"There was a lot of inaccurate terminology in these policies we had to remove; just like with the LGBT community there is a lot of diversity in the Deaf and hard of hearing community," Sassouni said.

Sassouni said that the important thing is not so much that there is Deaf and hard of hearing training for police officers, but that the officers understand and internalize what they learn.

"I understand from the police's perspective too, that a lot of people are deceitful out there; lying," Sassouni said. "But there has to be another way than just making assumptions."

"There was not a Deaf and hard of hearing policy before," Henderson said. "There were cases when we could not involve that population because [police] didn't know what to do because they weren't seen as a law enforcement partner. ... Now we have a policy, so Deaf and hard of hearing people can interact with the criminal justice system. It's data-driven, by folks who've had problems.

"It's not just Black Lives Matter," Henderson added. "We don't have the luxury at this time with [the Donald Trump] administration to be siloed. We all deserve public safety and the more inclusive this conversation is, the safer we are."