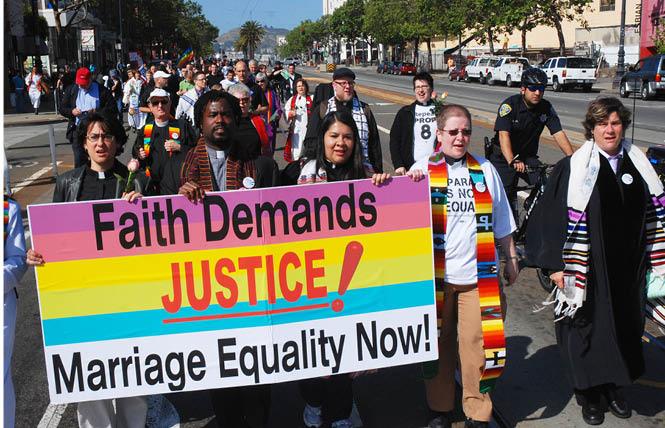 Proponents of Proposition 8 are appealing a decision to release tapes of the landmark Perry v. Schwarzenegger trial to the United States 9th Circuit Court of Appeals.

Judge William H. Orrick of the U.S. District Court for the Northern District of California had ordered July 9 that tapes of the 10-year-old trial be released next month.

"On the undisputed record before me, there is no justification, much less a compelling one, to keep the trial recordings under seal any longer," Orrick stated in last week's ruling. "The recordings shall become public on August 12, 2020."

Earlier this year, some Prop 8 proponents asked Orrick to extend the 10-year seal, and a hearing on the matter was held in Orrick's (virtual) courtroom June 17. KQED-TV, the Bay Area affiliate of the Public Broadcasting System, wanted access to the tapes for documentary purposes.

"KQED opposes any delay in the release of the Prop 8 trial videos," Thomas Burke, an attorney for KQED, said in a July 14 phone interview with the Bay Area Reporter. "Judge Orrick's order was sound and we look forward to the public release of these videos."

The circuit court has to hear the appeal, but the real question is whether the Prop 8 proponents will ask for, and the circuit court grant, a stay on enforcing Orrick's decision to have the tapes released before the scheduled date of August 12.

If such a stay is granted, release of the tapes could be delayed for years as the appeal makes its way through the federal courts.

After Prop 8 banned same-sex marriage in the state of California in 2008, the trial of Perry v. Schwarzenegger was held two years later to determine its constitutionality. Tapes of that trial made by federal Judge Vaughn Walker had been under a 10-year seal, in accordance with the local rules for the Northern District of California.

Orrick's July 9 decision upheld a 2018 ruling in which he determined that concerns over "judicial integrity" dictated the seal remain in place through 2020, and that those who wanted the tapes sealed in perpetuity had not demonstrated that not doing so would sufficiently cause harm to them.

"My concern regarding judicial integrity was based on Judge Walker's unequivocal commitments to the trial participants that he intended the recordings solely for his own use in drafting his opinion and the judgment in that case," Orrick stated in the July 9 ruling. "But I did not find that his statements meant that the recordings should be permanently sealed."

Walker, who is now retired, came out as gay following the trial.

"There is no evidence that any Proponent or trial witness fears retaliation or harassment if the recordings are released. Nor is there any evidence that any proponent or trial witness on behalf of the Proponents believed at the time or believes now that Judge Walker's commitment to personal use of the recordings meant that the trial recordings would remain under seal forever," Orrick stated. "There is attorney argument that the Proponents relied on Judge Walker's commitments regarding recording the trial proceedings to conclude that the records would never be released. But that is a different position than they took during oral argument at the 9th Circuit in 2011.

"Having found that the common law right of access requires release of the trial recordings absent some other evidence that could theoretically provide a compelling justification, and finding absolutely none presented on this record, Proponents' motion to continue the seal on the trial recordings is DENIED," Orrick continued.

In a phone interview July 9, Vogus said that she thinks Orrick's ruling "is fantastic."

"The Reporters Committee protects the public right of access to an issue of huge public concern," Vogus said. "We're thrilled [Orrick] did cite the amicus brief and he was talking about how access to the recordings will enhance the completeness of reporting about the trial. Hopefully the public will finally have access to these tapes and a lot of wonderful reporting will happen."

Thomas Burke, an attorney who represented KQED before Orrick, said July 9 that the ruling was historic.

"The Prop 8 ruling is a great win for KQED and a historic moment for the federal judiciary and the nation. Judge Orrick's ruling recognizes that the public should be able to see the video of this historic trial," Burke stated in an email to the B.A.R. "After multiple court rulings on this issue, Judge Orrick has again carefully interpreted the 9th Circuit's earlier ruling — and it's concerns about judicial integrity."

Holly Kernan, the chief content officer for KQED, added her praise in a July 9 email to the B.A.R.

"This is a victory for transparency and accountability. Kudos to KQED Senior Editor Scott Shafer for pushing for access and to Thomas Burke, who is an awesome First Amendment advocate," Kernan said.

Andrew Pugno, an attorney for the proponents, did not respond to multiple requests for comment.