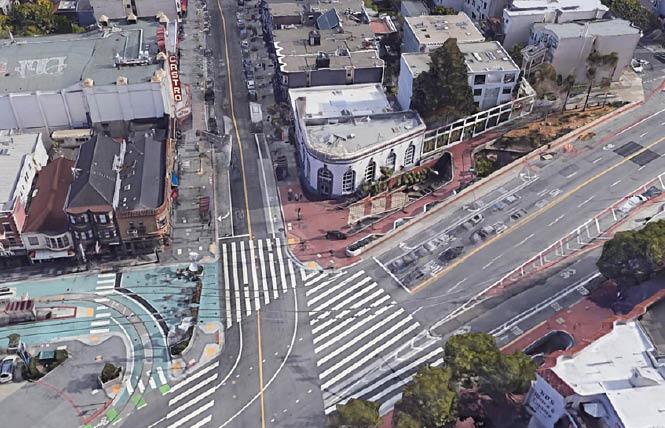 San Francisco's planning department has concluded that Harvey Milk Plaza in the city's LGBTQ Castro district is historically important and eligible for listing on the California Register of Historical Resources. It remains to be seen, however, if such listing for the public parklet above the Castro Muni Station will be sought either by the city or a community group.

Nor is it clear how the determination that the plaza itself is of historical importance — and that it contributes to having the entire Eureka Valley/Castro Street commercial historic district be designated a California Register Historic District — will impact plans to renovate the plaza. The city's public works department is planning to install a new elevator in the middle of the plaza to provide better access to the underground subway station from the street for individuals who use wheelchairs and others with mobility issues.

And there is an effort underway to renovate the entire plaza to create a more significant memorial to its namesake, the city's first gay supervisor who was assassinated 11 months into office the morning of November 27, 1978 along with then-mayor George Moscone inside City Hall. Milk's successor, the late gay supervisor Harry Britt, who died last month, and former supervisor John Molinari led the effort to designate the plaza in honor of Milk in 1985.

But the remodel proposal has been fiercely opposed by some in the community who have countered the goal of better honoring Milk can be achieved within the confines of the current design and at less cost than the estimated $10 million price tag for the fuller renovation proposal. While preliminary designs for the idea won approval from the city's arts commission, a final schematic is still years away from winning approval from the various city and regional oversight bodies that will need to sign off on it.

Howard Grant, who designed the plaza in the 1960s along with the Castro Muni station and others located along Market Street, is among those opposed at seeing it be ripped up or significantly altered. Employed at the time by Reid and Tarics Associates, Grant would come out as gay years later.

In light of the planning department's determination that Harvey Milk Plaza is eligible for listing on the California Register, Grant told the Bay Area Reporter it brings into question any plans to renovate it. He believes a community group should now seek its listing as a historic site.

"There is no compelling reason to go through the agony of demolishing the present plaza and greenbelt to end up with a smaller plaza that is hidden behind an entrance to the Muni station, especially if they put an enclosure on it," said Grant.

Any such project moving forward will have to have a compelling argument for why a site that is historically significant should be demolished, noted Grant. And while it is still possible that a major renovation of the plaza could be approved, Grant raised doubts about there being any justification for doing so.

"I don't think you can justify demolishing the plaza," he said.

Questions
At the start of Pride Month last year, the GLBT Historical Society expressed its misgivings about the plaza renovation proposal and argued a less intensive remodel of the site would be a better option. It also called for the city to conduct an analysis of the plaza to determine its historical significance and eligibility for being designated a historical site.

In response to the B.A.R.'s questions about the planning department's determination it is eligible for such a designation, GLBT Historical Society Executive Director Terry Beswick said the archival group would wait for additional analysis from the city before its board would consider pursuing listing the site on state or federal registers.

"I have not had a chance to consult with architectural historians on this report, but I'm glad the appropriate evaluations of the site are being undertaken prior to finalizing any proposed new designs," stated Beswick in an emailed reply. "I'm confident that all stakeholders can come together to agree on improvements to the Castro Muni Station and Harvey Milk Plaza that respect the historic significance of the site and also meet the needs of the neighborhood."

Beswick acknowledged that the plaza does need to be upgraded in some manner.

"I've always argued that the plaza should be looked at in the context of the entire intersection as part of a long-term planning process, and that historic preservation and commemoration should be integral to that effort," he stated. "I don't think anyone wants to keep it exactly as it is, and I hope that ADA elevator can go in soon."

Brian Springfield, a local architect based in the Castro who is a main leader of the Friends of Harvey Milk Plaza group that is seeking a complete reimagining of the parklet, questioned the need to designate the plaza as a historic site in an interview with the B.A.R. He argued that such historic events like the candlelight march held to honor Milk and Moscone the night they died and the celebrations in 2013 and 2015 of U.S. Supreme Court decisions in support of marriage equality occurred on the street with the crowd spilling into the plaza.

Gay District 8 Supervisor Rafael Mandelman, who represents the Castro at City Hall, told the B.A.R. that the finding the plaza is historically significant "makes sense." He said it remains to be seen what that means for any project undertaken at the site.

"In terms of any renovation or renewal of the plaza, it definitely has implications for what can and can not be done," said Mandelman, who added, "I don't really know where this ultimately will go. Clearly, work is needed on the plaza to make it more usable. This report identifies some features that need to be incorporated in that. There is still broad latitude on what can be done there."

Gay state Senator Scott Wiener (D-San Francisco), who secured $1 million in state funding for the plaza friends group, did not immediately respond to the B.A.R.'s request for comment about the planning department's determination about the site.

Planning department spokeswoman Gina Simi told the B.A.R. no one with the city agency was available Friday for a phone interview. As of press time, she had yet to respond to emailed questions about what impact, if any, the historic listing eligibility determination would have on the proposal to revamp the plaza or if the city would seek such a designation for it.

Determined eligible for historic listing
The department is now working on a more detailed response to the findings of the historic resource evaluation report, which was conducted by the firm TreanorHL. In January it submitted a 36-page draft report that evaluated whether Harvey Milk Plaza was an historic resource.

It concluded that the plaza "appears individually eligible for listing" in the California Register of Historical Resources under Criterion 1-Event "for its association with gay liberation, Pride, and politics as a gathering place for exceptionally important vigils and marches."

It narrowed the period of significance for the plaza to its construction completion in 1976 and the first National March on Washington in October 1979, which the firm noted "marked the 'coming out' of the LGBTQ cultural and political movement at the national level. The plaza retains sufficient integrity to communicate its significance."

It also determined the plaza "appears eligible as a contributor to the Eureka Valley/Castro Street Commercial Historic District for its cultural association with the LGBTQ rights movement in San Francisco."

The firm noted that the plaza being named in honor of an important individual is not reason alone for it being significant. And in this instance, it pointed out that the site "is not directly associated with Milk himself, his political career, or his efforts establishing LGBTQ rights."

But the firm pointed to the citywide LGBTQ cultural framework adopted in 2015 and finalized a year later, titled "LGBTQ History in San Francisco," to determine that "Harvey Milk Plaza appears significant under 'Theme 6: Gay Liberation, Pride, and Politics (1960s to 1990s)' as a gathering place for exceptionally important vigils and marches, such as the candlelight vigil from the Castro to Civic Center the night of Harvey Milk and George Moscone's assassinations in 1978 and the White Night Riot march from the Castro to Civic Center in 1979 after assassin Dan White avoided a first-degree murder charge."

In the planning department response to the firm's report, signed by Allison Vanderslice, a principal preservation planner and the CEQA cultural resources team manager for the environmental planning division, the staff state they "agree with the findings of the HRE that the Harvey Milk Plaza is individually eligible for listing in the California Register under Criterion 1 as a gathering place of exceptionally important vigils and marches" for the events TreanorHL cited.

The planning staff wrote they also agreed with the firm's finding that the plaza would contribute to the Castro district's being listed.

"The Castro Street historic district is eligible under Criterion 1 as an intact example of a late 19th century streetcar suburb in San Francisco, as well as for its association with the consolidation of San Francisco's LGBTQ community in the neighborhood in the 1970s," states the staff report. "The period of significance spans two distinct eras; whereas 1880-1929 represents development of the neighborhood as a streetcar suburb and spans the earliest known date of construction up until the beginning of the Great Depression, 1970-1979 represents the period in which the Castro developed as an exceptionally significant cultural, social, and political area for San Francisco's LGBTQ community. Harvey Milk Plaza is associated with the later period of significance."

Elevator project
The evaluation focused solely on the Harvey Milk Plaza and not the entire Castro Muni Station. It is unclear what it will mean for the planned elevator project.

As the B.A.R. reported in December, a glass structure for a three-stop elevator is to be built in a sunken terraced portion of the plaza that is currently fenced off and inaccessible to the public. It will include space for a fourth stop providing direct access to Market Street that could be added at a later date when funding for it is secured.

The $9 million project had been expected to break ground this fall and take upward of 18 months to complete. Its website says it is on track with that timetable, and Beth Rubenstein, a spokeswoman for San Francisco Public Works, told the B.A.R. Friday the agency wasn't sure if it would be impacted by the historic evaluation of the site.

In terms of the Friends of Harvey Milk Plaza group's efforts, Springfield told the B.A.R. it is close to hiring a public space consultant who would engage in another round of community outreach about what to do with the site. Next would be selecting the creative lead for the design team to create final architectural plans for the plaza, he said.

"We have a schematic design or phase 1 that was approved by the arts commission. Now we need the vision," said Springfield.

Those plans, he added, would take into account the city's findings on the plaza's historical significance.

"It is really hard to speak about it with any certainty, as you never know what is going to happen," he said. "It is an unknown. But depending on where it lands during the design process, the design team would have to respond to that."