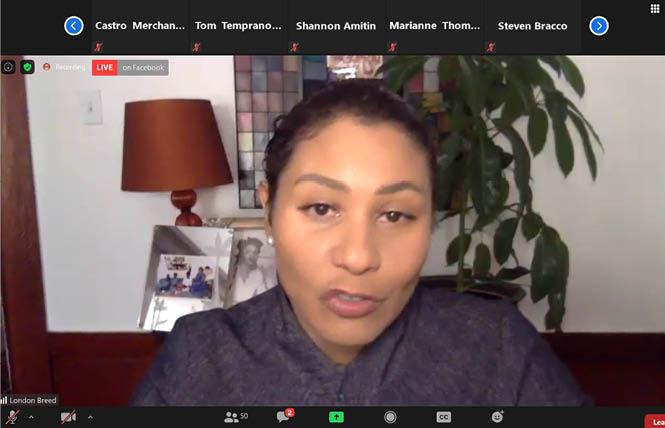 San Francisco Mayor London Breed stressed that the slow pace of business reopenings is frustrating but it is impossible to speed up due to the ongoing COVID-19 pandemic, in a Zoom meeting with the Castro Merchants association July 10.

Breed said she was excited last month to announce that certain businesses would be able to open quicker than originally foreseen — and then disappointed when the COVID case numbers left her with no other option than to put those and all other scheduled business reopenings on pause, including those that were going to open Monday, July 13.

"It really broke my heart to hear about businesses that were prepared to open June 29, only to be told the weekend before that they can't open and the significant loss there," Breed said. "These are not decisions being entered into lightly and this is not business as usual. We want to make plans; it's our natural desire. This is what we're used to but this is not normal times."

Breed said there is a back-and-forth between her office and the Department of Public Health as they try to find the right balance between supporting small businesses — and individual mental well-being — while trying to keep the virus at bay.

"I fight with DPH every day not just for the economic health of the city, but when you think about it, how this is affecting our mental health," Breed said, going on to cite the effects of closed churches and children who can't play with each other. "I'm going to aggressively push the department in that direction that they have a mental health response."

Breed herself tested negative for the novel coronavirus this week after being exposed to an infected person at a recent public gathering, according to the San Francisco Chronicle.

Dire situation for small businesses
About 50 participants joined the half-hour Zoom call. The mayor spoke for about half the total time with the other half reserved for addressing questions that were submitted by merchants.

Castro Merchants President Masood Samereie explained that the mayor was invited so that the merchants could "get some insight and ask some questions" about city policy on COVID-19. (A planned June 1 Zoom discussion with the merchants was postponed due to the protests over police violence and racism.)

The mayor laid out a bleak picture of how the COVID-19 outbreak has affected — and will continue to impact — small businesses, particularly those in the Castro. Citywide, merchant sales have declined by 70% in recent months.

"I know you are frustrated, and that so many businesses are suffering," said Breed. "We need to face the reality that the coronavirus will have a long-term impact, even as we reopen."

Breed said that the small business resiliency fund has been able to help some companies, but that there isn't enough city money available for all. San Francisco faces a budget deficit of between $1.5 billion and $1.7 billion over the next two years, which will hamper any attempted response.

Breed said that the city is looking at ways of getting more money from the state or federal governments, as well as from private sources.

One way in which small businesses have been hampered, the mayor said, is the amount of red tape they faced even before the pandemic took hold. Gay District 8 Supervisor Rafael Mandelman has already committed to reducing bureaucratic obstacles to small businesses going forward.

Breed said she wants to work with the Castro Merchants on a plan to get more people to shop and dine within San Francisco who already live in the Bay Area, noting the deleterious decline in tourism.

Street homelessness
Much of the mayor's remarks touched upon the city's homelessness crisis, which she acknowledged has intensified during the pandemic. Breed said she recently visited the Castro neighborhood to see the situation for herself.

She said she was planning to meet with the Healthy Streets Operation Center Friday, at Mandelman's recommendation, to discuss the problem as it specifically relates to the neighborhood.

"The Castro is not on the radar the way the Tenderloin, the Mission, and even the Bayview have been," Breed said.

Mandelman said in a phone call with the Bay Area Reporter July 10 that he spoke with Breed the previous day and asked for more help for his district, though he did not specifically mention Healthy Streets.

"We had a conversation yesterday where I said we need a lot more help," Mandelman said. "The problem in the Castro is a significant challenge, with unhoused folks who have mental health problems and substance abuse issues and we need to get help to those people instead of asking the neighbors to deal with it."

Samereie stated that homelessness in the Castro may scare away customers from restaurants and bars that have moved operations outdoors, and those that plan on doing so if the Shared Spaces permitting on 18th Street is approved.

The mayor shared that concern — saying "we need a plan for the whole city" — but nonetheless hoped people wouldn't be reluctant to dine out.

"The restaurants I have been fortunate to visit — it's been wonderful to sit outside and be undisturbed," Breed said.

Breed said that the Healthy Streets Operations team will come to the Castro, specifically to the encampment on 16th Street south of Market Street, and to Jane Warner Plaza.

"The one-offs — trying to convince people to get off the Dolores median — it's not happening," Breed said, adding that the homelessness is intertwined with mental health and drug crises, and sometimes people who use drugs do not want to go to a safe sleeping site.

The safe sleeping site at Everett Middle School at Church and 16th streets, championed by Mandelman in May, will be closing shop soon, Breed said, as the San Francisco Unified School District prepares for the coming school year. She hopes to "work with the school district to extend that."

Mandelman has since stated that the fact many people did not want to go to the safe sleeping site was a revelatory experience.

On Friday, Mandelman said he wasn't aware of efforts to extend the Everett site, adding that he supports additional safe sleeping sites, which he said the city needs, but does not know of a better place in District 8 to support one than Everett.

He said he would need to be apprised of how the city would implement a new site before he supported one in his district because "the city should have been able to do better" with Everett.

"I've had mixed feelings about how it turned out," Mandelman said. "It was good for folks who showed up but it did not lead to the general improvement overall that some of the neighbors had sought."

Mandelman said that there are still bad conditions on 16th Street south of Market Street, on Dolores Street and in the Duboce Triangle.

"It was definitely less than I had hoped for," Mandelman said.

Breed said that while the settlement in UC Hastings' federal lawsuit against the city over conditions in the Tenderloin has resulted in fewer unhoused people there — last month's settlement requires hundreds of tents to be removed and their occupants placed in safe sleeping sites or vacant hotel rooms — it came at a tremendous cost to the city even with some federal financial assistance.

"I think timing was a big part of what happened in the Tenderloin. We had a few hundred rooms reserved for people with COVID that we were able to shift over," Breed said. "I want to be clear that what we did is very costly, even with reimbursements from FEMA."

'We're not out of the woods'
Breed said that most reopenings are on pause but that some things will change July 13 nonetheless — the San Francisco Zoo will be able to reopen, shoppers can once again use their own bags, and there will be further guidance on boat and fishing expeditions.

There have been 4,316 cases of COVID-19 in San Francisco and 50 deaths, as of Friday afternoon.

"We're not out of the woods yet but we are in a much better place than so many areas around the country," Breed said.

On Wednesday, July 15, Breed will provide an update as to further reopening plans.

Updated, 7/10/20: This article has been updated to include comments from Supervisor Rafael Mandelman.