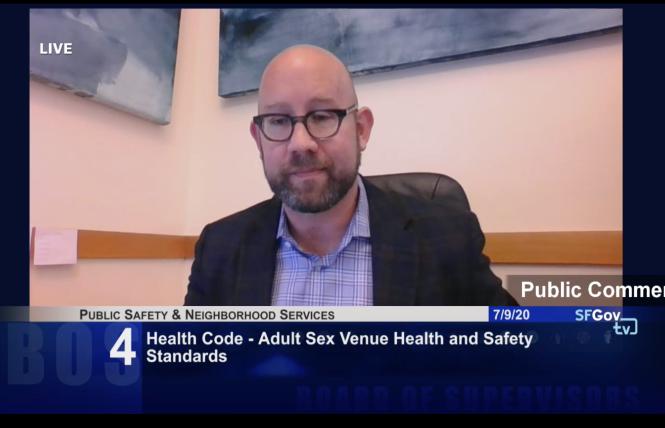 San Francisco is poised to allow gay bathhouses to return after the businesses closed more than three decades ago during the height of the AIDS epidemic.

A proposal to remove restrictions that the city placed on the establishments in the mid-1980s, such as no locked doors and monitoring the sex of patrons, sailed through a Board of Supervisors hearing Thursday. The full board is expected to approve the policy change when it meets Tuesday, July 21, and the city's Department of Public Health will have until January 1, 2021 to adopt the changes called for in the ordinance.

Various adult sex venues have continued to operate in the city over the last 30 years, but they have done so without providing private spaces behind a locked door. Since the novel coronavirus outbreak in March, such businesses have been forced to close and are waiting to hear from health officials when they will be allowed to reopen.

"To be clear, this ordinance does not and will not require or allow the reopening of adult sex venues in San Francisco before it is safe to do so as part of our COVID-19 reopening," stressed gay District 8 Supervisor Rafael Mandelman, the sponsor of the ordinance.

What it does do, explained Mandelman, "is allow for adult sex venues to be part of our economic and cultural recovery when it is safe to do so."

The supervisors' Public Safety and Neighborhood Services Committee, which Mandelman chairs, unanimously voted for the ordinance 3-0. Having had to delay the hearing for three months due to the coronavirus pandemic, Mandelman timed bringing it forward to coincide with the International AIDS Conference being co-hosted virtually this week by San Francisco and Oakland.

Speaking in support of the proposal was Paul A. Aguilar, a member of the San Francisco AIDS Foundation's HIV Advocacy Network. He called the city's current policy "outdated" and unreflective of current times.

"Initially, the decision to close the bathhouses was based on shame, fear, stigma, and homophobia," said Aguilar.

Due to numerous advancements in HIV prevention and AIDS care, the city has seen new HIV cases drop precipitously in recent years and is nearing its goal of reducing transmission of the disease to only a handful of cases per year.

Race Bannon, the Bay Area Reporter's former leather columnist and a longtime LGBTQ advocate, said there is no longer any valid reason to deny adult sex venue patrons private spaces within such establishments. Doing so not only will provide people a safer space to meet their sexual partners, argued Bannon, it also honors their right to have intimacy.

"It syncs with where we are at culturally in San Francisco and being on the correct side of economic justice and public health," said Bannon.

No one from the health department spoke during the hearing, nor did the other two supervisors who are members of the committee, Catherine Stefani and Shamann Walton. There was also less public comment than expected as the committee moved through its agenda with lightning speed and finished before the time many people had been told to tune in for the adult sex venues item.

Mandelman's office initially had told the B.A.R. the ordinance would be taken up next week, but it later revised that timeline. The full board will first vote on it July 21, and because it is an ordinance, will need to vote a second time, expected to be at its July 28 meeting.

As the B.A.R. first reported in February, when Mandelman announced he would seek to jettison the long-standing prohibitions that prevented gay bathhouses from operating in the city, local health officials for the first time dropped their objections to changing the city's health code to allow for such businesses to reopen.

Beginning in the 1990s San Francisco's health department partnered with the city's remaining adult sex venues as avenues to reach gay men and educate them about safe sex practices. But the department's leaders had remained resolute in their opposition to allowing gay bathhouses to open with private rooms.

Their change in stance was influenced by the introduction of PrEP, the once-a-day pill that prevents the transmission of HIV, and people living with HIV with undetectable HIV viral loads being unlikely to transmit the virus to their sexual partners. In effect, there was no longer sound scientific reasoning to keep the bathhouse restrictions in place.

The standards could still include prohibiting patrons of the businesses from engaging in sexual activities deemed "as posing an unreasonable risk of infection" for HIV and other sexually transmitted diseases, according to Mandelman's ordinance. The businesses would continue to be required to provide patrons free condoms, lubricant and other safe sex supplies, as well as information about the transmission of HIV and other STDs.

"During the 1970s and early 1980s, bathhouses were a focal point of gay social life in San Francisco and were important community meeting places where friends would gather to share stories, dance to the latest disco hits or watch a live show," said Mandelman during his introductory remarks at the hearing. "COVID-19 has resulted in the closure of many small businesses, a deadening of our neighborhood commercial corridors and record unemployment in San Francisco and around the country. I hope this ordinance will make the operation of adult sex venues more feasible and will encourage the opening of new businesses that will aid in our economic recovery."

UPDATED 7/9/2020 with a revised timeline for when the full Board of Supervisors will vote on the ordinance.