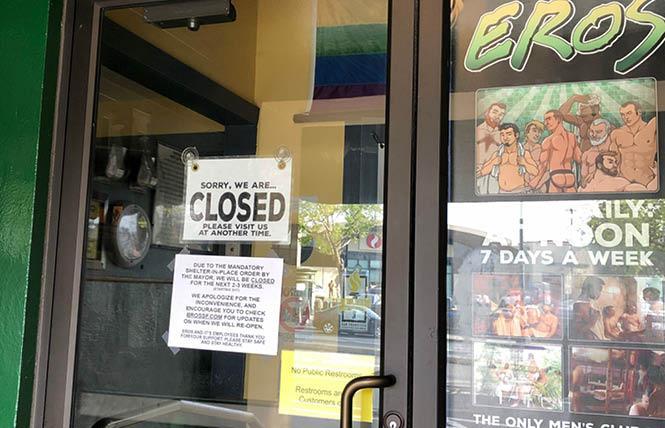 Eros, one of two gay sex clubs in the city, remains closed due to the novel coronavirus pandemic. Photo: John Ferrannini

San Francisco supervisors Thursday will take up proposed changes to how the city governs adult sex venues. It is the first step toward excising regulations enacted during the height of the AIDS epidemic in the 1980s that effectively led to the closure of the city's gay bathhouses.

As the Bay Area Reporter first reported in February, gay District 8 Supervisor Rafael Mandelman wants to see the city jettison the long-standing prohibition against having locked doors for private rooms rented by bathhouse patrons and rescind the requirement that such venues hire people to monitor the sexual activities of their customers.

His ordinance was to be taken up in mid-March, but the hearing was postponed in light of the novel coronavirus outbreak. At the time Mandelman had told the B.A.R. he saw no reason to abandon his ordinance because of the pandemic.

He agreed to reschedule the hearing in concert with the city's Department of Public Health for a time when health officials were not overwhelmed in dealing with the viral pandemic and could focus on the sex venue rules. The city in recent weeks has seen a spike in new cases and hospitalizations due to COVID-19, leading local officials to postpone allowing additional businesses and cultural institutions to open at the start of July.

Nonetheless, Mandelman has scheduled a hearing on his ordinance for this Thursday, July 9, at the supervisors' Public Safety and Neighborhood Services Committee, which he chairs. It is timed to coincide with the International AIDS Conference being co-hosted virtually this week by San Francisco and Oakland.

Mandelman told the B.A.R. Monday that he and his staff had regularly checked in with the health department "about their bandwidth and capacity to do this hearing and move this along. They seem to feel they can do it, and I don't want this ... I would like to get this done and move on."

While Mandelman acknowledged the timing might seem odd due to the health crisis, he would like to see the new rules in place for when the pandemic is over and businesses like gay bathhouses could open their doors again.

"I don't anticipate bathhouses opening during the pandemic. It is the International AIDS Conference this week and it feels like a good time to move this forward," he said. "We introduced this before the health crisis, and I do think it is the right policy change. We will emerge from the pandemic at some point; I think it would be great if bathhouses are part of San Francisco's economic and cultural future."

The committee meeting begins at 10 a.m. and the adult sex venue rules will be heard last. The hearing will be livestreamed online at http://www.sfgovtv.org and broadcast via SF Cable Channel 26.

Bathhouse history in SF
San Francisco's bathhouse restrictions were in response to a lawsuit the city had filed that resulted in the venues going out of business. In October 1984 a San Francisco Superior Court judge issued a temporary restraining order that shuttered nine gay bathhouses and sex clubs.

The legal case came to an end in 1989 when the city dismissed its lawsuit. By then the city's gay bathhouses were no more, but over the ensuing years sex clubs opened their doors. They did so without private rooms patrons can lock shut.

The two gay sex clubs remaining in the city, Eros in the Castro district and Blow Buddies in the South of Market neighborhood, are currently closed because of the health crisis. On its website Eros notifies customers it is will be closed until mid-July "with the possibility of an extension," while Blow Buddies advises people to "Be calm and wash your hands! See you on the other side."

The Bay Area's two gay bathhouses, the Watergarden in San Jose and Steamworks in Berkeley, are also shuttered due to the coronavirus outbreak. Both posted notes on their websites they are awaiting word from local and state health officials on when they will be able to reopen.

By the 1990s San Francisco health officials saw the city's adult sex venues as avenues to reach gay men and educate them about safe sex practices. But they had remained resolute in their opposition to allowing gay bathhouses to open with private rooms.

The standards could still include prohibiting patrons of the businesses from engaging in sexual activities deemed "as posing an unreasonable risk of infection" for HIV and other sexually transmitted diseases, according to Mandelman's ordinance. The businesses would continue to be required to provide patrons free condoms, lubricant, and other safe sex supplies, as well as information about the transmission of HIV and other STDs.

Initially, Mandelman had included language instructing DPH officials to revise the city's bathhouse rules by June 1 and then pushed that date back to July 1. His office told the B.A.R. they are working with health officials on a new deadline, which at first was likely to be October 1 but is now expected to be January 1 next year to give the health department plenty of time and flexibility.