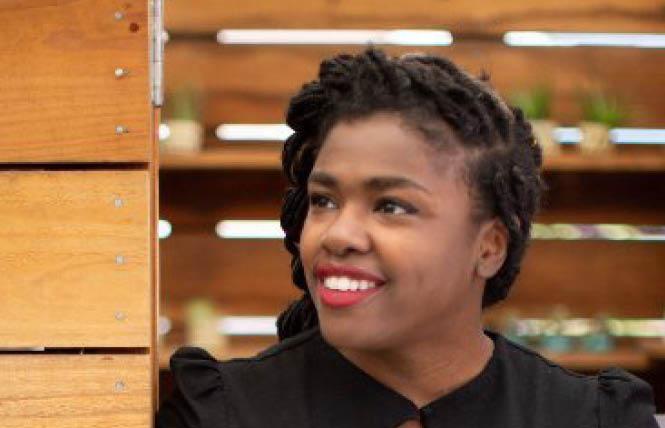 With the election of Kaylah Paige Williams as its female co-president this month, the Harvey Milk LGBTQ Democratic Club is being led for the first time by two Black co-presidents.

Williams is serving alongside Kevin Bard, a gay man who had been the sole president of the club since last year. Williams, who is bisexual, was elected during the progressive political group's Tuesday, June 16 meeting, conducted via Zoom due to the novel coronavirus outbreak preventing in-person large gatherings.

"I am really excited to take on this position," Williams, who had served as the club's outreach chair, said during the meeting.

Her elevation to the co-presidency position had been expected, as Milk club members had nominated her to co-lead them back in May. It followed the fallout from an email Bard had sent using the group's official email account that accused San Francisco Mayor London Breed of "hobophobia" regarding her homeless policies amid the health pandemic and used language against the city's first Black female mayor that many found to be racist.

Bard and the club apologized for the May 2 email and, after holding an emergency meeting the next day, delineated a new process for sending out emails on behalf of the club to ensure multiple people reviewed them before hitting send. The club then decided to bring on Williams as its co-leader.

During the Milk club meeting last week, Williams pledged to bring "more transparency" to the inner workings of the group and said she was "happy to work alongside Kevin."

Years ago the club changed its bylaws in order for it to have co-presidents if two people wanted to run as a team to lead the club. It has had several pairs of members serve alongside each other. The club can also opt to elect a single president when it holds its board elections each January, as it did in 2019 and again this year by electing Bard the sole president.

Bard said he was excited to be working with an "excellent activist and African American woman."

The same determination she has wielded on behalf of her political clients Williams pledged to bring as co-president of the club.

"I hope to bring that same tenacity and go-getter spirit to the Milk club," said Williams, who also said she wants "to make sure we are running an organization that is held to the highest integrity and make sure every single member is heard and seen and their opinions are heard."

CA bans travel to Idaho
As expected, the state of California is banning its employees and lawmakers from traveling to Idaho on the public's dime for non-essential business. Attorney General Xavier Becerra made the decision official Monday, June 22, and said the ban would take effect July 1.

San Francisco officials had told the Bay Area Reporter in April that the Gem State would be the 12th state added to its list of states the city bans both taxpayer-funded travel to for non-essential purposes and the awarding of city contracts to businesses based in those states. Its prohibitions against Idaho also take effect July 1. A memo notifying departments and city staff that Idaho has been added to the covered list will be sent out after the lifting of the shelter-in-place order enacted in March due to the novel coronavirus outbreak.

The reasoning for the state and city actions against Idaho is due to its governor, Brad Little (R), signing into law March 30 two bills that restrict the rights of transgender Idaho citizens. Idaho House Bill 500 requires transgender students to participate in athletics based on their gender assigned at birth, and Idaho House Bill 509 bars updating the listed gender on birth certificates issued to transgender people.

The American Civil Liberties Union is suing Little and other Idaho state officials over the school sports law in federal court. According to the ACLU, Idaho is the first state to impose an outright ban on participation of transgender athletes and the only with a statewide law regulating transgender and intersex athletes in the country.

The ACLU filed its lawsuit April 15 on behalf of Lindsay Hecox, a track athlete at Boise State University who is transgender, and an unnamed 17-year-old soccer player at Boise High School who is cisgender and concerned about being subjected to invasive "sex verification" testing under the new law. Joining in the federal lawsuit are the ACLU of Idaho, Legal Voice, and Cooley LLP.

Meanwhile, nearly 50 professional, Olympic, and Paralympic athletes as well as hundreds of student athletes are calling on the National Collegiate Athletic Association to move all of its championship events in 2021 out of Idaho. As for the Trump administration, it filed a statement of interest in the federal lawsuit last Friday, June 19, in support of the state law.

"Allowing biological males to compete in all-female sports is fundamentally unfair to female athletes," stated Attorney General William P. Barr. "Under the Constitution, the Equal Protection Clause allows Idaho to recognize the physiological differences between the biological sexes in athletics."

Both San Francisco and the Golden State adopted policies five years ago that ban taxpayer funded travel to states that enact anti-LGBT laws and have mirror "no-fly" lists. At the state level, the ban also applies to academics and sports teams at state-funded universities and colleges.

"Where states legislate discrimination, California unambiguously speaks out," stated Becerra in a June 22 news release confirming travel to Idaho would be restricted because of the adoption of the two anti-transgender bills. "The state of Idaho has taken drastic steps to undermine the rights of the transgender community, preventing people from playing sports in school or having documentation that reflects their identity. Let's not beat around the bush: these laws are plain and simple discrimination. That's why Idaho joins the list of AB 1887 discriminating states."

Web Extra: For more queer political news, be sure to check http://www.ebar.com Monday mornings for Political Notes, the notebook's online companion. This week's column reported on all 20 cities and towns in San Mateo County recognizing Pride Month for the first time this June.