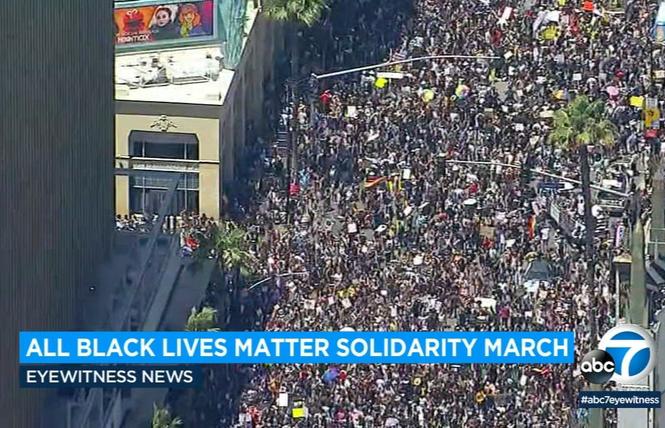 The official in-person 50th San Francisco Pride parade has been canceled but a protest march will take place on Pride Sunday (June 28).

A post on the website of the community news site Indybay states that an autonomous multiracial trans and queer group will be hosting a "Pride is a riot" protest march. According to the post, people will gather at noon at 19th and Dolores streets, a block from where demonstrators gathered earlier this month to protest the police killing of George Floyd and express support for the Black Lives Matter movement and police reform.

The march will begin at 2 p.m. The author of the post is not specified.

"On Sunday June 28th, we will gather to honor LGBTQ freedom fighters who came before us, to call for the liberation of black, brown and Indigenous people, and to demonstrate that trans and queer people are in this fight," the post states. "It is not enough to demand police out of pride. We want police out of schools, police off our streets, police out of all communities. Defund, Dismantle, and Abolish the police!"

As the Bay Area Reporter previously reported, earlier this year, the board of directors of the San Francisco LGBT Pride Celebration Committee voted not to ban the Alameda County Sheriff's Office from the parade.

Since the Alameda County Sheriff's Office had not participated in years past — and its exclusion was proposed in unison with a proposal to ban Facebook, Google, and its affiliates — Pride board of directors president Carolyn Wysinger, who is black, accused advocates of the proposal of using long-standing issues of police brutality toward black people for attention. (The sheriff's office was included in the activists' proposal because of deputies' role in carrying out an eviction of homeless moms with Moms 4 Housing from a vacant West Oakland home they occupied.)

Fred Lopez, a gay man who is the executive director of the San Francisco LGBT Pride Celebration Committee, did not immediately respond to a request for comment.

This year's Pride parade was canceled due to the COVID-19 outbreak, leaving Market Street open on Pride Sunday for the first time in decades — and on the occasion of the 50th anniversary of Pride, which began to commemorate the anniversary of the Stonewall riots in New York City, an LGBT uprising against police harassment.

"We want you to make this day your own," the post about the June 28 protest march states. "Create a contingent of your beautiful queer neighbors, lovers and community members. Bring your motorcycles, cars, strollers, trucks, bikes, and feet. Bring offerings, gifts, dance, music, debauchery, spirit, whatever you have to share.

"We call on all queer communities and our accomplices that are fighting for a future without white supremacy and the structures that support it. Join us in [the] streets so we can reclaim Pride," it concludes.

When asked for comment about the June 28 event, gay District 8 Supervisor Rafael Mandelman stated he suspects "there may be more."

"We have reached out to the City's Emergency Operations Center to encourage them to begin planning for how to ensure whatever events do happen around Pride can occur as safely as possible," Mandelman said. "The pandemic is still with us. Our numbers have been very good so far, and we have saved thousands of lives in San Francisco, but we want to keep it that way."

Last week, Mandelman stated that large public gatherings on Pride weekend were likely, despite the cancelation of the in-person parade.

Similar events have already occurred in other cities. In West Hollywood last weekend an All Black Lives Matter march occurred when Los Angeles Pride's parade normally would have. In Brooklyn, a Black Trans Lives Matter event drew thousands on the weekend Brooklyn Pride in-person events would have occurred.