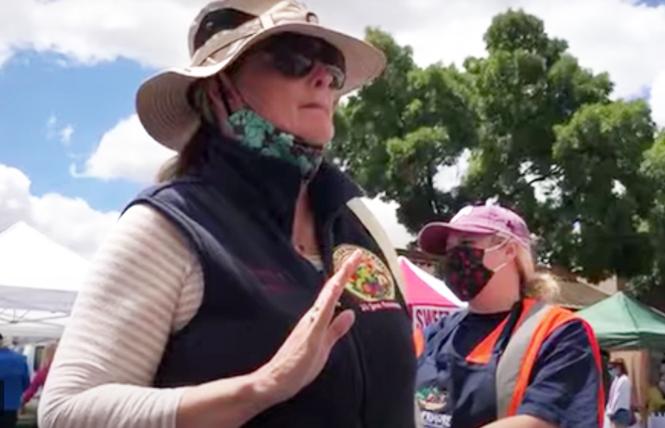 The operator of the Livermore Farmers' Market has resigned a day after video was posted online showing its director admonishing a gay vendor for handing out Pride flags June 7, the first Sunday of Pride Month.

According to a statement posted by the city of Livermore on its Facebook page Tuesday, the California Farmers' Market Association tendered its resignation as the manager of the East Bay city's market. The group Livermore Downtown Inc. is searching for a new management company to operate the farmers market going forward, said the city, but for now the market will not operate this Thursday or Sunday.

"The occurrence at the market that led to CFMA's resignation is not reflective of Livermore's values of inclusion and respect," stated the city's post. "As stated in the council's proclamation, 'Our strength is derived from our diversity and inclusiveness, from respecting one another.' The City Council believes that a city can best stand against bigotry, intolerance, and hate through leading by example and living our shared community values."

The city also noted that it is flying the rainbow flag at City Hall this month "as a colorful reminder of how our city is strengthened and enriched by the diversity of its residents, business owners, and students, and we continue to work toward a more inclusive community."


In its own statement posted after the city's, the Livermore Downtown Inc. Board of Directors said it was "appalled by" the actions of the CFMA executive and that such behavior "is unacceptable and will not be tolerated." The board also issued an apology to the community and pledged to find a market operator "we can all be proud of."

The board stated it "believes in equality for all. We stand with our community in supporting and celebrating our LGBTQ+ neighbors."

Livermore Pride Executive Director Amy Pannu, a queer resident of the Alameda County city, told the Bay Area Reporter her organization will work with city and business leaders to help get the farmers market back up and running again. She said CFMA's resignation came as a surprise and is hopeful the city can find a market operator that is "equality and equity minded."

"We are sad at how this will affect our community by not being able to access all the amazing vendors that do come to the farmers market," said Pannu. "We are eager to get a good company in there."

Hayden can be heard telling Floyd that he should have read the rules packet given to vendors about "cooperating with market management" and that she "will suspend you right now until you read those rules." Because the video begins midway through their conversation, it is unclear what Floyd had said that Hayden found objectionable enough to declare, "This is Disneyland, so you can't talk to us this way."

Floyd did not immediately respond to the B.A.R.'s request for comment about CFMA's resignation. He had said in a phone interview Monday he would not return to the farmers market as a vendor if it continued to operate it.

"It is not a comfortable situation," said Floyd, who launched his cookie business at the market in June 2016 and turned it into a brick-and-mortar retail establishment last year a few weeks prior to Christmas.

This past Sunday he was at his store to be open for his customers he would normally see at the farmers' market. He had posted a note on his store website alerting people that he would be open with a fuller menu at the store.

"Last week I thought I might see half of the people we get at the market. But yesterday we sold out of literally everything," he had told the B.A.R.

It operates 16 other farmers markets in the Bay Area, including three in San Francisco, according to its website, and its policy banning Pride flags apparently applies to all of its markets.

It oversees the market at the Fort Mason Center for Arts & Culture in San Francisco's Marina district. The cultural facility had told the B.A.R. Monday that it would ensure that the vendors at its market could display rainbow flags in June for Pride Month or anytime of year.

"The Pride flag is an icon of inclusivity, diversity and unity. We support this and all other expressions of our LGTBQ+ communities," Nick Kinsey, the center's director of external affairs, told the B.A.R. after being shown the video of the altercation at the Livermore market. "We welcome displays of pride at the market and year round on our campus. We will be flying it ourselves throughout Pride Month including on market days."

The CFMA has received widespread criticism since news of what happened at the Livermore market broke, along with the B.A.R. several local television stations also covered the story Monday night. In comments posted on social media to the B.A.R.'s article, residents of other cities where CFMA operates farmers markets either called for people to boycott them or called on their city leaders to demand that the policy banning Pride flags be lifted. 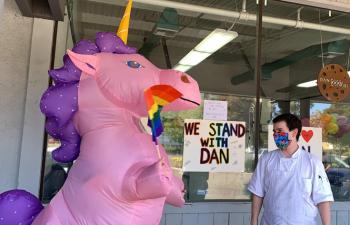 A pink unicorn showed up at Dan Good Cookies in Livermore and was greeted by owner Dan Floyd. Photo: Courtesy Brittni Kiick

In response to requests for comment on Monday, two gay councilmen in cities where CFMA manages markers spoke out against the Pride flag ban.

"This is a nonpartisan issue. What in the world is her problem? I'm disgusted that you would be asked to stop passing out flags," wrote Aguilar. "What pisses me off is she does not know free speech policy. All farmers markets have a free speech area. The flags could have been passed out there."

And in San Francisco, Matthew Goudeau, a gay man who is director of the city's Grants for the Arts that supports Fort Mason's arts-related public programs, notified the B.A.R. Tuesday that he had reached out to the cultural facility "to get an update on the situation."