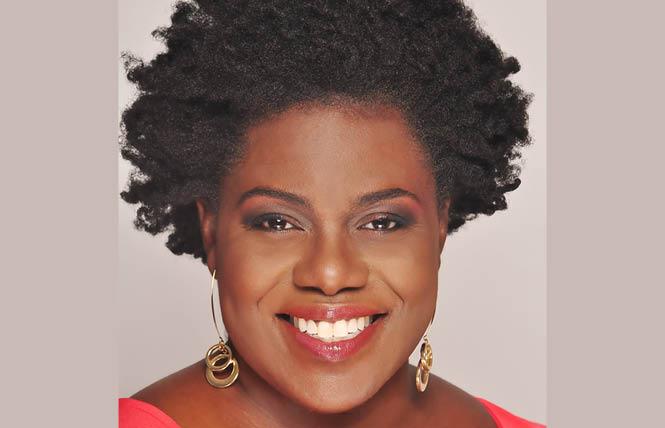 Exhortations to practice sexual abstinence as the COVID-19 epidemic rages on should be replaced with a harm reduction approach, according to Keosha Bond, a New York-based public health educator.

Bond, who has a doctorate in education, stated that unfortunately, a side effect of the reallocation of public health resources to COVID-19 could lead to a spike in sexually transmitted infections.

As the Bay Area Reporter reported April 1, the beginning of the outbreak was coupled by public health departments, such as in New York City and San Francisco, stating that individuals should "avoid close contact — including sex — with anyone outside your household" and several LGBT community leaders urged no hookups.

But as the pandemic continues and the timetable for a vaccine is measured in months or years, public health officials are seeing the need for individuals to be given more guidance to make their own decisions.

"The reason why the health departments had to come out with risk reduction is because they had to be realistic with regard to sex," Bond, an assistant professor of behavioral science and health promotion in the Department of Public Health New York Medical College, said in a June 10 phone interview with the B.A.R. "Abstinence-only sex education has been taught in schools but it really is not useful. You are telling people not to do something but you are not giving them the resources to protect themselves."

Bond, an ally, said people should be given information about COVID-19 and how it is spread.

"If you're used to casual sex — hookups — try to minimize that activity," Bond said. "If you have someone you have sex with, make sure you have the same practices — washing hands, proper hygiene, and open communications."

There has been a lot of research about whether the novel coronavirus can be found in semen and vaginal fluids (The B.A.R. recently reported that researchers do not believe the virus can be transmitted via semen.) Bond said that while this may not necessarily be as useful from the perspective of public health as knowing it is spread through saliva, scientists are racing to figure out all they can about the virus.

"There's a lot about COVID we still don't know," Bond said. "The virus itself is spread through air droplets, coughing and sneezing, touching surfaces and then your eyes. Now, you're touching when you have sex, but we don't know the extent of COVID and so we can't tell people if it's a sexually transmitted disease, though we do know what you do while having sex can transmit it."

NYC Department of Public Health guidelines seem to acknowledge recent COVID research — advising people it is safer to wear a mask and avoid kissing if possible, especially when having sex with people in a different household.

Bond is worried that sexually transmitted infection rates may rise because many health care resources have been redeployed to fight the spread of COVID-19. It is harder to get a test to detect the presence of an STI (most can be asymptomatic but still transmissible) and contact tracers have been redeployed from HIV and syphilis work.

"It's a matter of people not being able to seek treatment for STIs," Bond said. "It is through safe sex — not just reducing partners and using condoms, but also frequent testing — that we stop their spread."

"These are very private and very confidential and if something is questionable, they'll have you come in for a blood screening," Bond said. "It's not uncommon for people to contract an STI and there are ways to prevent it, and many STIs are treatable so people should get away from the stigma. It's more important to be healthy than pretend, and not get treated."

Ending the epidemics paused
Due to the need to shift the state's focus to COVID-19, efforts to integrate California Department of Public Health responses to the HIV, STI, and hepatitis C epidemics have been placed on pause.

According to a spokesperson last month, these efforts will resume "when a significant portion of the Center for Infectious Diseases staff have returned to regular duties."

"COVID-19 has required counties to divert staff to respond to the pandemic. This includes disruption of routine clinic services. Alteration in HIV services include increasing home HIV testing, and use of telemedicine to assess and prescribe Pre-Exposure Prophylaxis (PrEP) and Post-Exposure Prophylaxis (PEP), and increasing mail order dispensing of medications," the spokesperson stated. "Developing standing orders for those who need sexually transmitted disease screening allows for patients to efficiently provide the needed samples (most able to be collected by the individual themselves) with the least required person to person interaction."

Other than staff redirections, money earmarked for HIV prevention will not be used for COVID-19 efforts.

Catie Stewart, communications director for gay state Sen. Scott Wiener (D-San Francisco), who introduced legislation earlier this year to provide more funding for these joint efforts, told the B.A.R. on May 14 that that legislation has had to be put on hold "given COVID and the [state] budget" but added that "we will work on that for next year."